A Guide to Alcohol & Drug Rehab in Birmingham, AL 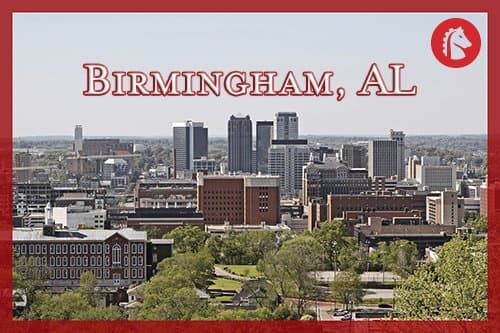 In 2015, over 5.5 million opioid prescriptions were written in Alabama. Increased access to these drugs heightens the odds that they will be diverted and misused, which brings a host of negative consequences, not the least of which is the potential for a fatal overdose. Prescription opioid misuse is giving rise to illicit opioid abuse, and abuse of heroin and synthetic fentanyl is up as well.

In Jefferson County in June 2017, there were 25 overdose fatalities involving fentanyl (which is 50 times more potent than heroin) and heroin. Alabama Media reports that fentanyl overdose deaths doubled in Jefferson County between 2015 and 2016, up to a total of 248 fatalities involving the potent opioid, which is often used to “cut” heroin, potentially without the buyer’s knowledge.

According to the 2015 Drug Threat Assessment published by the Gulf Coast High Intensity Drug Trafficking Area (GC HIDTA), heroin is the number one drug threat in Birmingham. Throughout the GC HIDTA, which also includes other counties in Alabama, Louisiana, Arkansas, Mississippi, and Tennessee, methamphetamine, cocaine, and marijuana are top drug threats in the region.

The following information lists Region 2 as having the highest percentage when compared to the rest of Alabama for these indicators:

Nearly 40 percent of the 736 drug overdose deaths in Alabama in 2015 involved an opioid drug, the Joint Economic Committee (JEC) Democratic staff publishes. The Alabama Opioid Overdose and Addiction Council was formed in 2017 via Executive Order 708, which was signed into law by Alabama Governor Kay Ivey. Since its inception, the council has recommended increasing access to the opioid antagonist drug naloxone (Narcan) in order to combat opioid overdoses, Alabama Media publishes. In Jefferson County, the Jefferson County Department of Health (JCDH) operates a naloxone clinic that offers free training to anyone who wishes to learn how to administer the potentially lifesaving antidote. Overdose kits are offered free of charge and without a prescription to residents who have undergone the training.

HB208, or the “Good Samaritan law” protects citizens who administer naloxone to try and reverse an overdose, the Alabama Public Health department reports. The council also recommended improvements to the Alabama Prescription Drug Monitoring Program (PDMP) to make it easier to use and report potential problematic patterns of drug use, misuse, and diversion.

Drugs and crime often go together, as individuals under the influence of drugs are at a higher risk for committing or being the victim of a crime. Rates of robbery, assault, violent crimes, and property crimes all increase in a community when drug abuse and/or addiction rates rise.

In a partnership between the Jefferson County Criminal Court System and the Birmingham/Bessemer Treatment Alternatives to Safer Communities (TASC) Program, Jefferson County Adult Drug Court Programs serve adults arrested on felony drug charges. These programs are individual and provide mental health and addiction services for eligible individuals; upon completion of the program, drug charges may be dropped. The TASC program serves residents of Jefferson County to provide necessary treatment services instead of clogging up the jails and prisons for drug- or mental health-related offenses.

There are several options for behavioral healthcare services in the Birmingham area. The Single State Authority on drug and alcohol abuse and addiction and mental health services in Alabama is the Alabama Department of Mental Health (ADMH). This department manages, oversees, distributes federal grants and funds, and contracts with community-based providers to ensure a comprehensive and integrated level of care for Alabama residents.

Public programs may operate on a sliding payment scale based on what residents can pay or have health insurance coverage to cover. Private programs are regulated by the state authority, and providers can become certified through the Alabama Association of Addiction Counselors (AAAC). Private programs may be more readily accessible and offer more amenities and services.

To find local treatment options in Birmingham, residents can use the Points of Contact listing for treatment options and referral information. Public services and providers are also listed by county through the ADMH Substance Abuse Provider Directory. State-recognized treatment centers and providers can also be found using the Substance Abuse and Mental Health Services Administration’s Behavioral Health Treatment Services Locator.

The greater Birmingham area is served by the Alabama Regional Medical Services (ARMS), which provides care to all residents regardless of insurance coverage or ability to pay using the Sliding Fee Discount Program (SFDS). The Jefferson County Department of Health (JCDH) also offers community-based services and programs for Birmingham residents.

alabamalocalsouthern us
Prefer getting help via text?
We're available 24/7 via text message. Signup below for access to our team when its convenient for you!
and many more...
Ready for Recovery?See what brings people to Oxford for help.