What Are Co-Occurring Disorders?

What is the definition of co-occurring disorders?

Co-occurring disorders, also referred to as a dual diagnosis or comorbidity, is often used to describe a situation where an individual is diagnosed with more than one disorder at the same time.1 Individuals who simultaneously struggle with both a mental health and substance use disorder are said to have co-occurring disorders—also referred to as a dual diagnosis.2

According to the 2014 National Survey of Drug Use and Health conducted by the Substance Abuse and Mental Health Services Administration, nearly 8 million people have both a substance use disorder and mental disorder in the U.S.3 More than half of those with co-occurring disorders are men.

Several mental health conditions may co-occur with substance use disorders, including:

Some common co-occurring disorders include:

However, recent trends have indicated that prescription medications such as narcotic pain medications and benzodiazepines are becoming increasingly more prevalent forms of substance use disorders in dual diagnoses, and co-occurring alcohol uses disorder rates are declining.3

Some drugs are thought to potentially elicit or mimic symptoms of certain mental illnesses which might, in some cases with chronic use, lead to the development of more lasting mental conditions. An example of this is cannabis and cannabis-related psychosis. Research indicating that heavy users of marijuana are at a significantly higher risk to later develop psychosis has been used to support the idea that substance use itself may predate the arrival of mental health issues.9

In the other direction, some posit that unmanaged mental health issues might drive the initiation and eventual compulsive use of certain substances. In lay circles, and even in some clinical circles, this is the very popular notion of self-medication, where an individual who has symptoms of a mental health disorder begins to use drugs or alcohol to cope with the stress of those symptoms, such as with schizophrenia and tobacco use disorder.10

A third perspective notes that substance use disorders and other mental health disorders share many similar risk factors, and are often associated with specific environmental events, such as physical or emotional abuse.11 Thus, the development of both a mental health disorder and a substance use disorder simply reflects a shared vulnerability to developing a co-occurring disorder.

Substance Use Disorder And Co-occurring Risks

There are several risk factors that increase the probability you will develop a substance use disorder and a co-occurring mental health issue, including:12 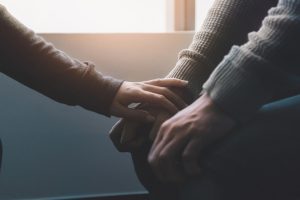 Oxford Treatment Center can take an integrated treatment approach with co-occurring disorders and has a team of experienced addiction treatment professionals to customize the correct treatment plan depending on the person and the co-occurring diagnosis.

An integrated treatment program for co-occurring conditions might involve:14

Regardless of where you choose to receive treatment for your co-occurring disorder, integrated treatment is designed to be as comprehensive and supportive as possible. The treatment team will set realistic goals for the program and adjust the goals accordingly as you progress in care.