Crystal Meth Abuse: How to Help Yourself or Others

Crystal meth is an illicit form of methamphetamine commonly encountered as glass-like fragments or shiny, whitish crystalline rocks. Meth is a powerful central nervous system stimulant and its use may lead to serious medical complications. Use of the drug is associated with increased dopamine activity in the brain. The accompanying rush of dopamine in reward areas of the brain serves as a powerful reinforcement for continued meth use, which makes the drug highly addictive.1

What is Crystal Meth?

Meth is a potent stimulant that increases the activity of several neurotransmitters. When used, the resulting increase in norepinephrine, serotonin, and dopamine release is associated with a surge in energy, a sense of euphoria, as well as feelings of reward, motivation, and pleasure. Repeated use of the drug can lead to dramatic—and sometimes long-lasting—changes in brain structure and function.1

This drug can be smoked, snorted, injected, or taken orally. Because the initial rush of the methamphetamine high fades relatively quickly, some individuals engage in a binge cycle of drug use, taking the drug over and over as each high wears off. Such a binge pattern of use can increase certain health risks, as people may forego food and sleeping for days. Repeatedly chasing a high with increasingly large amounts of the drug can also increase the risk of toxicity and overdose.1 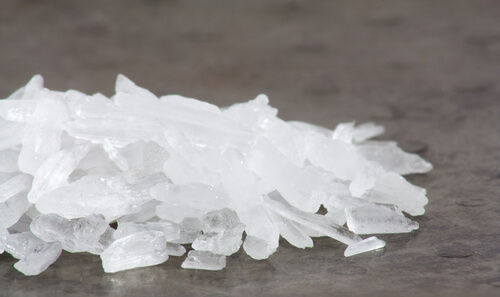 In 2017, the Substance Abuse and Mental Health Services Administration (SAMHSA) reported that 1.6 million people in the United States had used meth in 2016—about 0.6 percent of the country’s population. The average age of new users of meth is roughly 23.3 years old.2

Prescription stimulants (including pharmaceutical amphetamines and, even, methamphetamine) may be prescribed by a doctor for certain disorders, such as narcolepsy or ADHD.1 With the same mechanism of action as their illicit counterparts, substance use disorders may also develop in association with prescription stimulant use, especially if the medications are misused such as by taking higher or more frequent doses than prescribed.3

Should compulsive patterns of prescription amphetamine use develop, these individuals may end up purchasing methamphetamine through illicit means to support their habit.3

Meth overdose can occur anytime someone uses the drug, and it can be life-threatening.4 Of all of drug overdose deaths in 2017, 15% involved methamphetamines.1

An acute meth overdose may occur when an individual takes a dangerously high dose of the drug, resulting in significant toxicity and, often, serious side effects. A chronic meth overdose may develop in association with the cumulative adverse health effects experienced by an individual using meth on a regular basis. Both acute and chronic overdose can have devastating health consequences.4

Symptoms of acute overdose include:4

Chronic overdose may be associated with additional signs and symptoms, such as:4

A meth overdose requires immediate medical attention. Individuals need to be monitored for cardiac and respiratory failure, as well as major organ damage. An overdose can lead to coma or death. If you suspect a meth overdose has occurred, call 911 immediately.4

While addiction to some drugs can be treated with medication, there are no medications currently approved for use in meth addiction rehabilitation. Many substance use disorders, including those that involve crystal meth abuse, are often treated with various behavioral therapies.5

Several behavioral therapeutic interventions may be applied to the treatment of methamphetamine addiction, including cognitive behavioral therapy, contingency management, Matrix Model, and various others. Oxford Treatment Center offers many of the above therapies at its facility. These therapies focus on helping the affected individual abstain from drug use while improving functioning in other areas of life, such as social relationships and job performance.

Often, an effective therapeutic regimen for substance abuse and addiction will be individualized to each person based on their unique situation and needs. Effective treatment should aim to improve several areas of the individual’s life impacted by problematic substance use, including mental and medical health, school or work concerns, interpersonal relationship issues, and networks of support.

It’s the goal of Oxford Treatment Center to customize each patient’s treatment plan to your specific needs. Our continuum of care allows our expert medical staff to adapt our offerings to your specific crystal meth abuse or addiction.

Access to supportive services that treat all co-occurring disorders, including other mental illnesses and physical health problems, may be an indispensable part of the recovery process. Addressing a broad range of concerns in an individual’s life can help with relapse prevention efforts by lowering stress levels and providing healthy coping mechanisms.

People who are addicted to crystal meth may have other mental health problems, such as depression, anxiety, personality disorders, or schizophrenia. The National Institute on Drug Abuse recommends treating these disorders with behavioral therapy and pharmaceutical interventions as part of the addiction recovery process.6

While crystal meth is powerful and potentially devastating drug, there is hope for those who are struggling with addiction to it. With comprehensive care that includes withdrawal management, medical care, people can effectively leave crystal meth abuse in their past.

Laura Close is a Senior Web Content Editor at American Addiction Centers and an addiction content expert for Oxford Treatment Center. She has a bachelor’s degree in English and has nearly a decade in professional editing experience that includes...Read More