Meth, or methamphetamine, is a highly addictive stimulant drug that can cause an intense burst of euphoria while making a person feel more energized, focused, and awake. The rush of pleasure caused by meth use is caused by a flood of dopamine in the brain. Dopamine is a neurotransmitter, which is one of the brain’s chemical messengers, that is involved with emotional regulation and the reward pathway. High levels of dopamine make a person feel good. Meth also interacts with the central nervous system, raising heart rate, blood pressure, respiration, and body temperature.

Meth interferes with decision-making and clear thinking abilities, which can lead to lowered inhibitions and more risk-taking behaviors. Aggression and violent outbursts are also potentially side effects of meth abuse. Paranoia, hallucinations, and psychosis may occur with chronic meth use as well.

Meth is considered to be very addictive, the Drug Enforcement Administration (DEA) warns. The National Survey on Drug Use and Health (NSDUH) reports that in 2016, approximately 684,000 adults in the United States battled meth addiction while 667,000 adults were considered to be current users of meth.

What is the Meth Comedown? 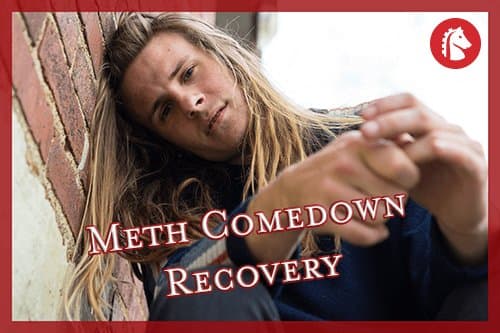 Meth makes changes in the brain that are related to the way a person thinks, feels, and acts. These changes become more pronounced with repeated use. This means that the more often someone uses meth, the more the brain and its chemical makeup will be altered. Individuals can then become physically dependent on meth, and the brain and body will feel like meth is necessary to keep feeling balanced.

Meth can stay active in the body for 10-12 hours, and the meth comedown begins after the drug starts to wear off, so between 12 and 24 hours after taking the drug typically. Usually, the first stage of a meth comedown will be intense fatigue; a person will feel very tired and lethargic, and have low energy levels. Eating and sleeping patterns are disrupted, and mood swings and difficulties feeling pleasure and concentrating are issues in the first few days after stopping meth. Irritability, agitation, and unpredictable behaviors that may even be violent are also possible during the first few days of a meth comedown.

Symptoms typically peak within 2-3 days and then start to taper off slowly over the next week or two. Meth cravings, anxiety, depression, disrupted thinking and learning functions, decreased appetite, and sleep difficulties can continue for several weeks to months after stopping meth. Cravings for the drug can be particularly intense.

When meth processes out of the body, a “crash” can ensue, which is often like an opposite of the meth high. When levels of dopamine drop after meth’s influence is no longer present, the brain can take time to try and recover. Anxiety, fatigue, depression, trouble thinking straight, memory issues, sleep difficulties, appetite fluctuations, and powerful cravings for the drug can all be part of a meth comedown. The amount of the drug a person uses, the amount of time it has been used for, and other biological and environmental factors can influence the severity of the meth comedown and withdrawal. Generally speaking, someone who has been abusing large amounts of meth for a long time will struggle with the most significant withdrawal symptoms.

The National Institute on Drug Abuse (NIDA) warns that some of the effects of regular meth use can take years to regulate. Meth can have a neurotoxic effect on brain cells that may be only partially reversible, and regions of the brain can take up to a year or longer to recover. The journal Life Sciences warns that the neurotoxic impact on dopamine and serotonin systems in the brain due to long-term meth use can impact impulse control, attention, motor coordination, decision-making, and working memory functions, and a person struggling with meth dependence is therefore highly likely to suffer a relapse. A relapse is a return to drug use after a period of abstinence and is particularly likely with meth addiction.

How To Comedown From Crystal Meth:

Meth is a powerful and potent drug that can stay in active in the bloodstream for several hours. The meth comedown can also be long-lasting, depending on how much of the drug a person took and how often they have been taking it. Since meth disrupts the normal functions of the central nervous system, when the drug processes out of the system, it can be difficult.

A meth comedown is not considered as physically dangerous as other drug withdrawals can be; however, the emotional impact can be uncomfortable and elevate the odds for relapse.

Some tips for recovering from a meth comedown include the following:

The potential for psychotic and unpredictable behaviors during a meth high and/or crash can make a controlled and secure environment, such as one offered through a medical detox program, ideal. Medical detox facilities offer supervision and support around the clock as meth processes safely out of the body. There are no specific medications for meth addiction, but mood stabilizers and other pharmaceutical tools may be beneficial for certain symptoms of meth withdrawal. Supportive care as well as therapeutic methods can help with relapse prevention as well.

Meth addiction is ideally treated through a specialized program that includes behavioral therapies, group and individual counseling, pharmacological tools, relapse prevention education, and concurrent treatment for any medical and/or mental health concerns. NIDA publishes that a treatment program should be at least 90 days to support sustained recovery.