Guide to Meth Psychosis & How to Identify Symptoms 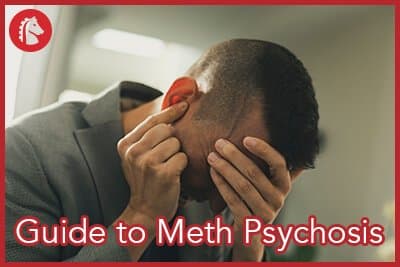 The brain interprets all of the signals produced by the senses, and it helps us to respond accordingly. Consider this: A tingle in the fingertips moves through a network of nerves until it lands deep in the brain, and there, that tingle is interpreted as warmth. Immediately, a signal moves from the brain to the muscles to pull the hand away from the source of the heat.

Thousands of signals move like this between senses and the brain each day, and they happen so quickly that we don’t even notice them. But when there is a disconnect between what the senses signal and what the brain interprets, the problem is hard to ignore.

A brain/sense disconnect is known as psychosis. The National Institute of Mental Health defines psychosis as a “loss of contact with reality.” The brain is spinning tales that aren’t backed up by the senses.

Psychosis can be a symptom of a mental health issue, such as schizophrenia. It is also a symptom of methamphetamine (or meth) use.

Research published in the journal CNS Drugs suggests that up to 40% of people who use meth develop symptoms of psychosis. The symptoms can be blamed, in part, on the way meth interacts with the brain.

Methamphetamine works on the brain’s chemical, or neurotransmitter, signals. When meth is present, the brain is prompted to release a great amount of a neurotransmitter known as dopamine. This creates a sensation of warmth, relaxation, and intense pleasure. Dopamine is responsible for the high people feel when they take meth.

The body’s regulatory system knows that dopamine levels are too high, and it releases another neurotransmitter to bring things back to normal. That transmitter, known as GABA, helps to bring the high down.

Repeated use of meth causes the body to simply burn through all supplies of both dopamine and GABA. In some cases, the body becomes less responsive to these chemicals, so when they are present, they’re not as effective.

Research from the journal Frontiers in Human Neuroscience suggests that this burnout of GABA can cause the brain to misinterpret signals from the senses. When that happens, confusion sets in. This confusion can be explained as psychosis.

Anyone who takes meth could be vulnerable to psychosis, but people who have a family history of diseases that cause psychosis, including schizophrenia, are at higher risk. They may have preexisting brain vulnerabilities that make the damage more acute, or there may be chemical pathways meth highjacks that make psychosis more likely.

Psychosis is often accompanied by a nagging inner voice that has nothing nice to say. People may hear a persistent whisper that tells them they are in danger, or they may hear a voice tell them they are worthless, and everyone knows it. Some people hear voices that tell them to do things, including harming themselves or others. Some hear entire concerts full of voices talking at once, and they find it hard to hear their own thoughts at all.
An addiction specialist quoted by ABC News suggests that paranoia is a common part of meth psychosis. People in the grips of an episode may think that the people they love are trying to harm them. They may go to great lengths to protect themselves, even though the threat they sense isn’t real.

Some people experiencing psychosis may extend their sense of paranoia to those trying to help them. That means they may never say anything aloud about the sensations they’re living through, but they may be quiet, watchful, and unable to hold reasonable conversations. It may be clear that their minds are active, and that they are in distress.

Research published in The Primary Care Companion to the Journal of Clinical Psychiatry suggests that a dramatic uptick in meth doses could also indicate psychosis. The patient profiled in this study attempted to medicate his psychosis with meth, so he went from taking meth once per day to using the drug five times per day. Unfortunately, this increased drug use tends to lead to an increased sense of psychosis. For this person, the added drugs made the symptoms worse.

How Long Can Meth Psychosis Last? 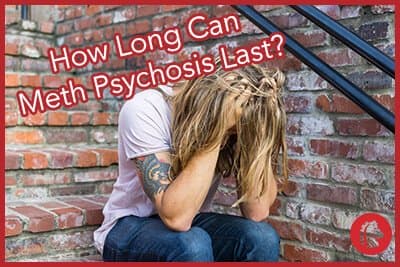 For many people, psychosis lasts as long as the drug is active within the body. As soon as the drug has been processed by the body and systems return to normal levels of functioning, the symptoms of psychosis fade away.

People with advanced addictions may never be truly sober, however. They may continue to take meth on an ongoing basis to stave off symptoms of withdrawal. That means they may be in a continued state of psychosis.

Some people can also experience ongoing psychotic symptoms, even when they are no longer taking meth at all, says the National Institute on Drug Abuse (NIDA). Some people experience a relapse to psychosis only when they’re under intense stress, NIDA says. They may be sober, but when intense stress appears, they’re thrust back into psychosis symptoms.

Ongoing psychosis, even if it comes and goes, can be remarkably distressing. In a study in the journal Drug and Alcohol Review, researchers examined the lives of people who got treatment for methamphetamine psychosis and addiction. Of those contacted years later, more than half had a relapse to psychosis. Of those people, 52% qualified for an alcohol use disorder and 22% had suicidal thoughts.

These are certainly distressing statistics, and they paint a grim picture of life with an addiction, but they don’t have to be the reality of everyone who uses meth. There are treatment programs that offer very real help for both psychosis and addiction. 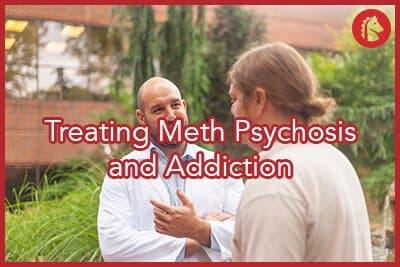 Because psychosis is a common part of mental illnesses like schizophrenia, researchers have looked for ways to amend the symptoms. They’ve targeted brain receptors responsible for psychosis symptoms, and they’ve developed drugs that can provide real relief.

This is good news, as it means people experiencing psychosis can get help to make the distress stop. People who experience a relapse can also get help.

For some people, medication therapy begins in medical detox, and it persists for just a short time. For others, medication therapy is ongoing. When symptoms reappear, they visit doctors again to get the help they need, and those visits may continue throughout the lifespan.

Treating the psychosis is just part of the healing process, however. People who have addictions need help in order to clear the damage done to the brain, so they can build lives that are stronger, healthier, and free of drugs.

It’s important to note that people with meth addictions can and do get better. As researchers writing in TIME point out, news coverage of meth abuse often suggests that people who use the drug have “damaged brains,” and that may lead people to believe that they simply cannot get better. This isn’t true.

Addiction therapy aims to help people understand why they developed a drug use issue in the first place. For some people, that means digging into an underlying mental health issue, such as:

These are very serious metal health concerns that leave people vulnerable to self-medicating with illicit drugs. They are also issues that respond to medications and therapy. When these issues are addressed, the risk of drug use can drop.

Therapy can also help people to develop healthy habits that can reduce their cravings for drugs. People might rebuild their relationships with family members in therapy, and they might learn to use meditation and exercise to help them stay calm in moments of distress. They might obtain vocational training, so they can get jobs to support them in sobriety. And they might use art therapy or music therapy to help them process hidden trauma.

Families might be excited at the thought of the healing addiction treatment can bring. But people in the midst of a meth psychosis episode might not be ready to hear the message of hope.

In the midst of a meth psychosis episode, it is best to work with professionals. A trained medical professional can deliver help while mitigating the risk of harm or trauma. Families shouldn’t be shy about asking for this help. When the immediate crisis is over, then the discussion about the healing work of rehab can begin.

When you or a loved one is ready to pursue recovery and sobriety, know that help is ready and waiting. You can reach our Admissions Navigators any time of day at . They have helpful information about our facilities and can answer your questions about treatment. You deserve help and recovery.

co-occurring disordersmethpsychosis
Ready to get started?
We're available 24/7 to answer questions and help you make decisions about starting recovery from drug use.
Your Next StepsFind help & resources