Underage drinking is a continual problem in the United States. According to the Surgeon General, alcohol is the most commonly used and abused drug in the country for young people and it’s estimated that there are more than 4,300 alcohol-related deaths for underage individuals each year.

One of the first steps in fighting this problem is to understand it. With that in mind, we conducted an analysis of government data on underage drinking to determine the areas where it is most prevalent. We focused on underage alcohol use as well as what is classified as “binge drinking,” and compiled the data on a state-by-state and regional level.

This data was collected from the Substance Abuse and Mental Health Services Administration’s 2016 – 2017 National Survey on Drug Use and Health. We specifically looked at individuals ages 12 – 20 years old and their responses related to alcohol consumption. This is data for individuals who used alcohol or participated in binge drinking (having 4 or more drinks in one sitting) within the past 30 days. We analyzed the data by state to see how different regions of the country compare.

What we found is that a significant percentage of underage individuals consume alcohol and binge drink across the United States. In all, over 7,350,000 young people said they drank at least one alcoholic beverage and 4,525,000 admitted to binge drinking within the last month. Looking specifically at day-to-day averages, those numbers mean 245,200 young people drink alcohol and 150,833 binge drink each day in the United States on average. 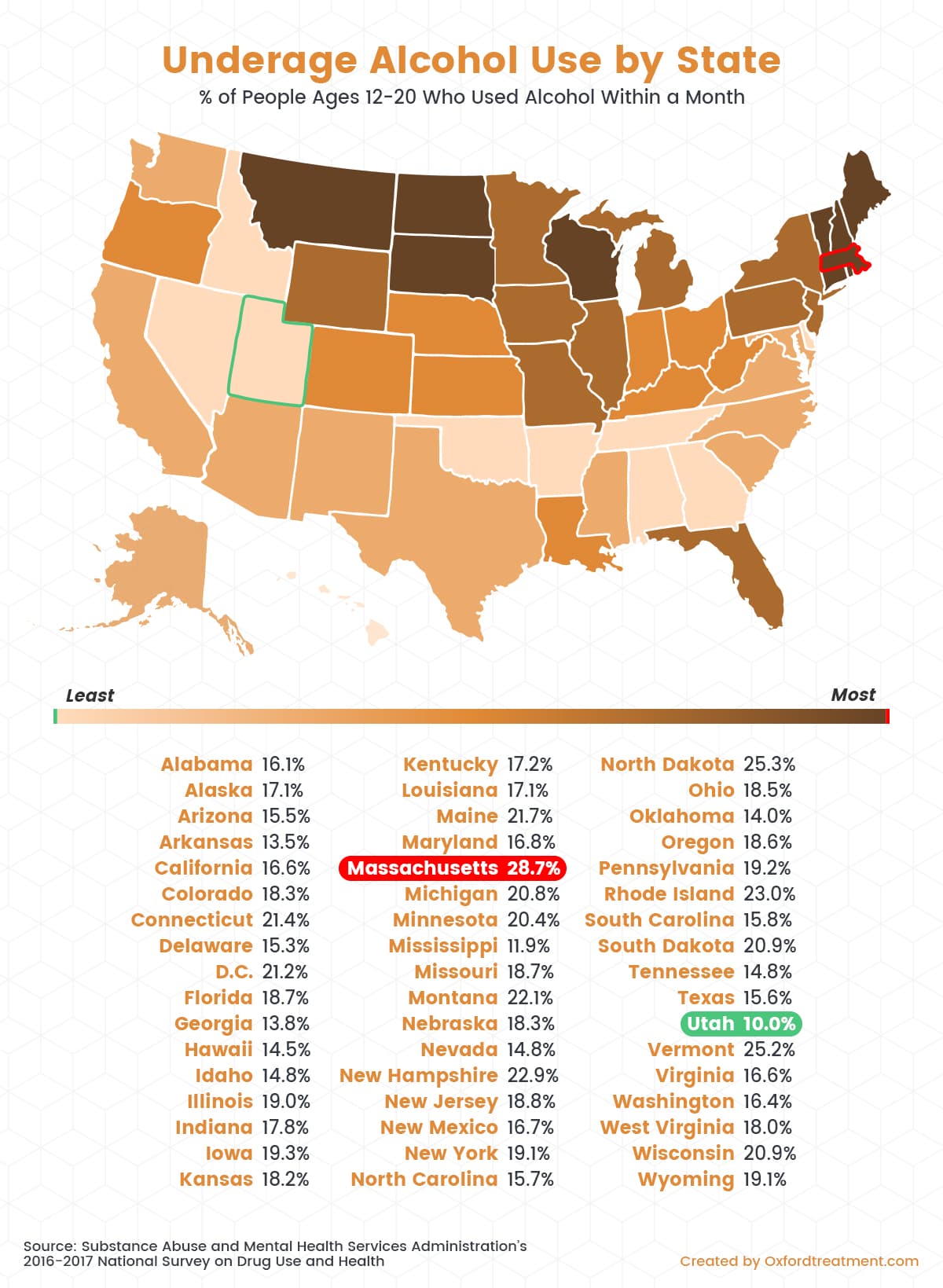 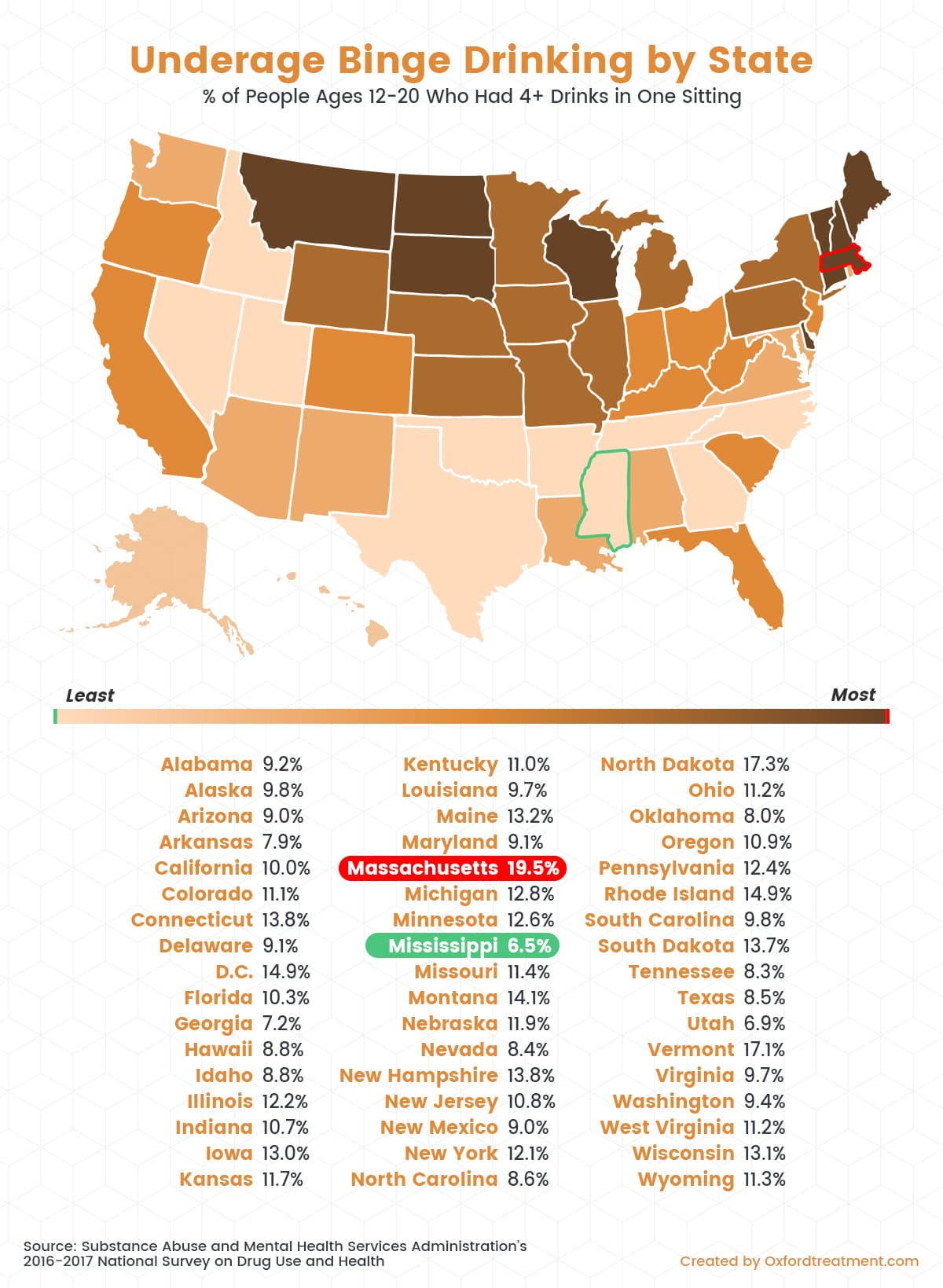 When analyzing the binge drinking statistics for underage individuals, Massachusetts is again the state with the highest percentage at 19.5%, roughly 10% lower than the percentage of those in the state reporting general alcohol use. The rest of the top 5 states for binge drinking are similar to general alcohol use with one difference: Washington, D.C. It goes: North Dakota (17.3%), Vermont (17.1%), Rhode Island (14.91%), and D.C. (14.9%). 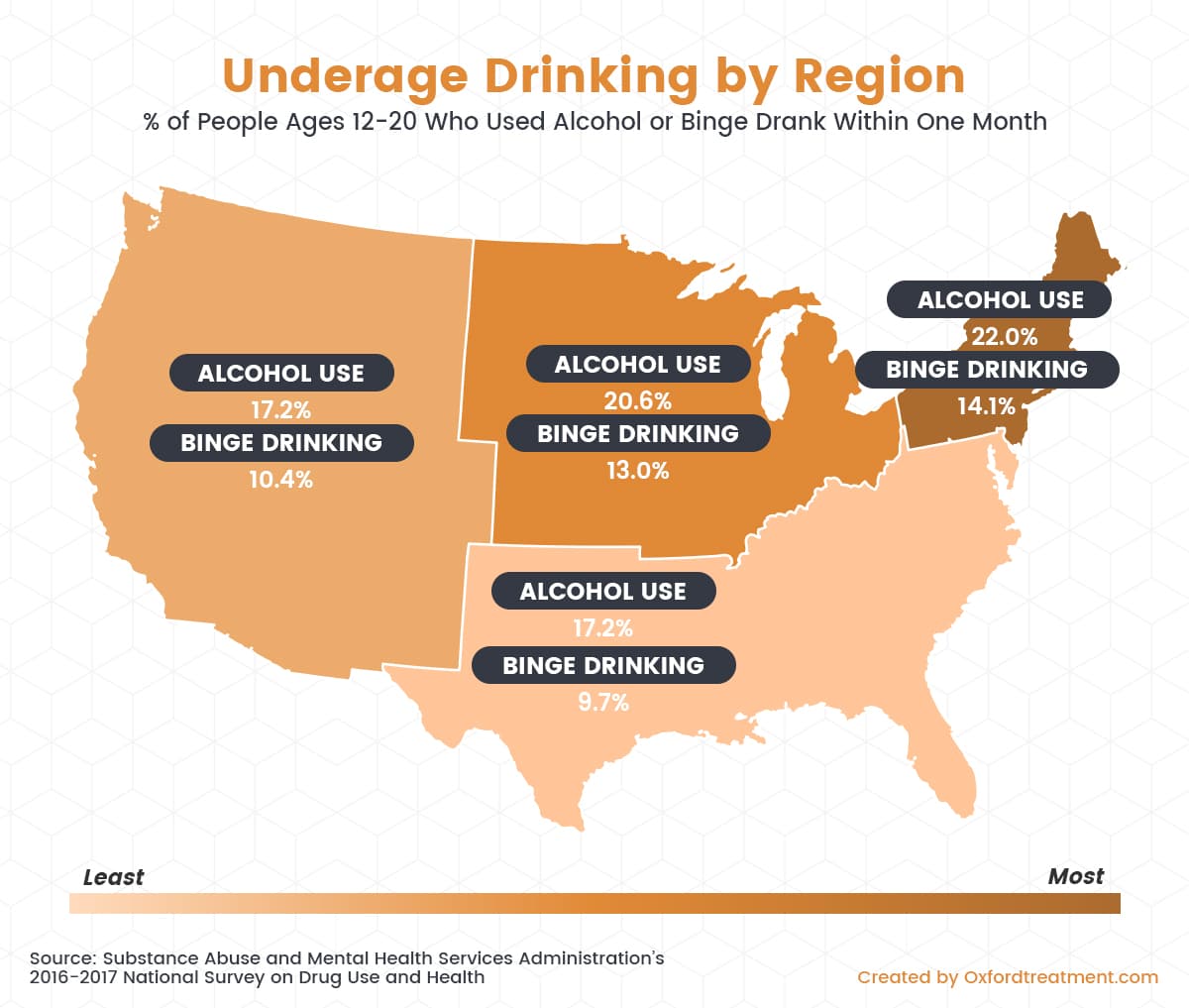 Segmenting the Data by Region

Below is a table that has statistics for all of the above categories, including statistics for every state, region, and the United States as a whole. All non-percent numbers represent thousands.

Overall, what we found is that a significant portion of young people in the United States drink alcohol and often binge drink. The degree to how much this occurs varies significantly based on location, but every state has thousands of underage individuals drinking alcohol and even binge drinking every day and every month. Underage binge drinking is a national problem and it can lead to further health complications, as well as alcohol dependency and addiction.

If you know a young person in your life suffering from alcohol addiction, find out more about how you can help.

Can I use this information?