How Dangerous is Consuming Alcohol During Pregnancy?

A teratogen is an agent that results in the disturbance of the normal process of development of the embryo in a pregnant woman. Numerous substances are known to be teratogens. Depending on the time of exposure, the teratogen can have very extreme effects or relatively mild effects.

Most often, during early development, teratogens affect the central nervous system (CNS; the brain and spinal cord). When embryos are exposed to teratogens in the womb, significant alterations in development of tissues in the brain can occur, resulting in long-lasting and permanent dysfunction in the individual.

There are numerous types of substances that can be serious teratogens when a woman who is pregnant is exposed to them, and they can be absorbed by the developing child. Alcohol is a serious teratogen, and numerous research studies have identified it as having significant effects on the embryo throughout all stages of development. Alcohol is also one of the most commonly used and abused drugs in the United States.

According to information provided by the National Institute on Alcohol Use and Alcoholism, in 2015:

According to the Centers for Disease Control and Prevention (CDC): 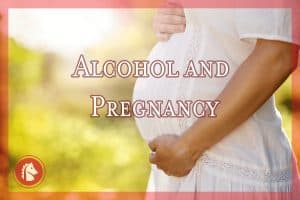 Major health organizations, including the CDC, the World Health Organization (WHO), and the National Institutes of Health, consistently make public statements that there is no safe level of alcohol use during any time when a woman is pregnant. In addition, the type of alcohol (e.g., beer, wine, liquor, etc.) does not affect this notion. Alcohol is alcohol. Whenever a pregnant woman drinks alcohol, the fetus is exposed to alcohol as well.

Numerous research studies have documented the effects of alcohol use on the fetus. The major effects are outlined below.

Numerous other cognitive and behavioral effects are associated with children who have been exposed alcohol in the womb. Again, the physical, cognitive, and behavioral symptoms that can occur as a result of exposure to alcohol in utero are collectively termed fetal alcohol spectrum disorders (FASDs).The symptoms of FASDs include any of the following (numerous symptoms may be present):

It is estimated that approximately one-third of the children who display FASD symptoms will also have heart malformations. These most often occur in the ventricles of the heart or the arteries, and can result in permanent disabilities for these children. Other cardiac issues can also develop as a result of exposure to alcohol in the womb.

Renal issues can also be linked to alcohol use by a pregnant mother. Issues that can occur include hypoplasia (developmental issues with the kidneys that can lead to malformations in the kidneys and significant lifelong renal issues) or bilateral renal agenesis (being born without any kidneys).

Most of the issues associated with having FASDs are not reversible. These children grow up requiring assistance throughout their lifetime in numerous areas. There is no way to predict which children will develop FASDs, and there is certainly no way to predict how one’s alcohol consumption affects different manifestations of an FASD. It has been suggested that 6-10 percent of children who are exposed alcohol in the womb develop FASD symptoms; however, these figures are not set in stone.

Some pregnant women may think they can still drink “nonalcoholic” beer, wine, etc. It is important to remember that most of the major health organizations in the world emphatically state that there is no safe level of alcohol use for women who are pregnant and the majority of these “nonalcoholic” beers and wines contain very low levels of alcohol. Because the effects of alcohol also interact with other factors, including genetics, personal vulnerabilities, and other environmental effects, even using very small amounts of alcohol may result in serious effects to the developing child.

It is better to be safe than sorry and discontinue any form of alcohol use, including “nonalcoholic” beverages.

What about the Mother?

Numerous research studies have documented the dangers associated with even moderate alcohol use.

According to the CDC, some of the concerns that pregnant women should have about themselves when drinking alcohol, in addition to concerns for their developing child, include increased risk of the following:

According to the CDC, some of the concerns that pregnant women should have about themselves when drinking alcohol, in addition to concerns for their developing child, include increased risk of the following:

Upon learning of pregnancy, a woman should make an appointment with her physician as soon as possible. The physician can monitor the development of the child and identify any potential reversible situations. In the majority of cases where women who drink small to moderate amounts find out they are 4-6 weeks pregnant and stop drinking alcohol, there are no significant complications. However, continuing to drink alcohol at any level results in an increased risk of serious issues in the developing child.

alcoholchildrenpregnantwomen
Ready to get started?
We're available 24/7 to answer questions and help you make decisions about starting recovery from alcoholism
Your Next Steps