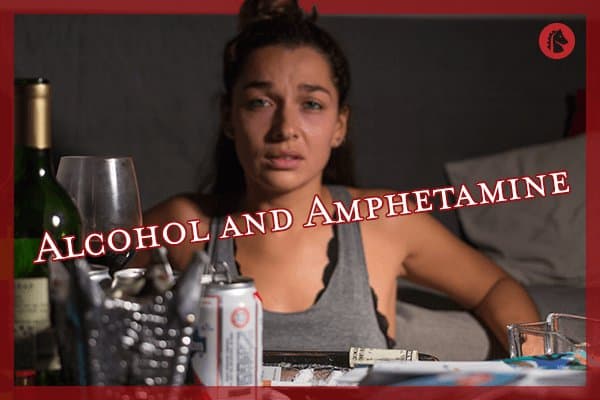 Alcohol is a central nervous system depressant while amphetamines are considered stimulant drugs with opposite effects. A person may take an amphetamine, often called an “upper” to counteract the depressant, while “downer” side effects of alcohol include sedation and drowsiness.

What Kind of Drugs Are Amphetamines?

Amphetamines include prescription stimulants that are often prescribed for the treatment of attention deficit hyperactivity disorder (ADHD) like Adderall(dextroamphetamine) or Ritalin, which contains a derivative of amphetamine called methylphenidate. Methamphetamine, meth and crystal meth, and MDMA or ecstasy are illegal formulations of amphetamine drugs that are often synthesized in clandestine laboratories. Stimulant drugs speed up heart rate and blood pressure while elevating body temperature and respiration levels. Attention, excitement levels, alertness, ability to focus, and energy increase while taking an amphetamine drug. Appetite is also suppressed, and sleep is not as necessary while under the influence of a stimulant.

Alcohol has the opposite effect, slowing down functions of the central nervous system (respiration, heart rate, body temperature, and blood pressure) and increasing drowsiness and relaxation while impairing decision-making abilities, concentration levels, alertness, reflexes, motor control, and movements. Both alcohol and amphetamines are considered mind-altering and addictive substances with a host of potential risks associated with their abuse.

The National Institute on Alcohol Abuse and Alcoholism (NIAAA) reports that nearly 90 percent of adults in the United States have consumed alcohol in their lifetimes (according to 2014 statistics), almost a quarter engaged in past-month binge drinking, and more than 6 percent drank heavily. Binge drinking is when a person raises their BAC, or blood alcohol concentration, up to 0.08 g/dL or above, which typically occurs after about four drinks for a man or five for a woman in about a two-hour timespan. Heavy drinking is drinking five or more drinks in a setting at least five times in a month. Binge and heavy drinking can constitute problem drinking and lead to a wide range of potential side effects and health concerns.

If a person mixes an amphetamine with alcohol, the sedative effects are dampened, and they may continue drinking more than they normally would. Ecstasy and meth are often considered “club” or “party” drugs, and when a person takes these substances, they may be able to continue to party longer and drink more over an extended period of time without feeling all of alcohol’s negative effects.

Concurrent amphetamine and alcohol abuse can cause a person to raise their BAC to dangerous levels and may lead to a pattern of excessive drinking that can have disastrous consequences, not the least of which is alcohol poisoning. The Centers for Disease Control and Prevention (CDC) publishes that six people die from alcohol poisoning daily in the United States.

Alcohol poisoning is extremely dangerous and can lead to coma, brain damage, and death. Signs of alcohol poisoning include slow heart rate, pulse, and blood pressure; nausea and vomiting; mental confusion; seizures; extreme drowsiness or loss of consciousness; trouble breathing; low body temperature; and clammy skin. Mixing amphetamines with alcohol can also complicate rescue efforts of first responders when they are attempting to reverse an overdose. First responders should be made aware of the issue immediately.

Amphetamine and Alcohol Effects on Health

Abuse of alcohol and the simultaneous abuse of either legal or illegal amphetamines resulted in nearly 40,000 visits to emergency departments (EDs) in 2010, according to the Drug Abuse Warning Network (DAWN).

Drinking alcohol can contribute to an increased sensitivity to amphetamines and cause a person to want to take more of them, as published in the journal Alcoholism:  Clinical and Experimental Research. Increased use of both of these substances can increase the risks for engaging in potentially hazardous behaviors, heighten aggression and the possible incidence of violent outbursts, increase sociability and decrease inhibitions, leading to behaviors that may be out of character. The risk for accidents, injuries, and being the instigator or victim of a crime may go up.

Drug and alcohol use can increase the odds for making questionable decisions, as both of these substances impair mental facilities and the ability to think clearly.

The National Council on Alcoholism and Drug Dependence (NCADD) labels alcohol as the most regularly abused addictive substance in America, as more than 17 million people in the United States are considered to suffer from addiction to alcohol. The National Survey on Drug Use and Health(NSDUH) publishes that over 1.5 million American adults were considered to be currently abusing a prescription stimulant drug (or methamphetamine) in the month prior to the survey.

Combining these two substances amplifies the side effects of both and may promote more use of both as well. One may be taken to counteract the effects of the other, to enhance the “high,” or to lessen the “crash” that can ensue when one substance wears off. Increased dosage of stimulants and heightened alcohol consumption can cause a person’s brain chemistry to be altered.

Both alcohol and stimulant drugs disrupt the normal production, absorption, and transmission of the neurotransmitter dopamine, which is integral in regulating moods and controlling willpower. High levels of dopamine, which occur as a result of both alcohol and amphetamine abuse, enhance feelings of pleasure. When these substances wear off, however, levels of dopamine drop and moods plummet as a result. This can encourage a person to keep taking these “feel-good” substances to increase happiness. Repeated alteration of the brain’s natural chemistry disrupts its chemical makeup and can even physically alter some of the brain’s circuitry and lead to drug dependence.

When someone is dependent on drugs or alcohol, withdrawal symptoms can manifest when these substances are not active in the body. An individual may take a different psychoactive substance to attempt to dispel withdrawal symptoms. The Substance Abuse and Mental Health Services Administration (SAMHSA) Treatment Improvement Protocol (TIP) reports that alcohol may be used to counteract symptoms of stimulant withdrawal, for instance, which can in turn lead to withdrawal symptoms from alcohol as well.

Physical withdrawal symptoms from alcohol can even be life-threatening, and withdrawal from amphetamines can be particularly emotionally difficult. When you combine both alcohol and an amphetamine, these side effects may be especially hazardous. As a result, medical detox in a specialized facility is required to safely process these substances out of the body while managing the symptoms, often with medications.