Harm Caused by Binge Drinking: What Happens After a Binge?

At the time of the 2014 National Survey on Drug Use and Health (NSDUH), there were almost 140 million current drinkers of alcohol, and more than 40 percent were classified as binge drinkers. This means that they drank at least five drinks in a sitting at least once in the month prior to the survey being conducted. The National Institute on Alcohol Abuse and Alcoholism (NIAAA) classifies a “drink” in the following manner:

Men and women metabolize alcohol differently, and the Centers for Disease Control and Prevention (CDC) defines binge drinking as bringing a person’s blood alcohol concentration, called BAC, to above 0.08 g/dL, which typically means five or more drinks for a man ,and four or more for a woman, within a two-hour period. Hormones and differences in levels of water and body fat between women and men may play a role in why alcohol is absorbed and metabolized differently.

Body mass and how much food a person ate prior to drinking can also influence the rate of alcohol metabolism and therefore the potential negative effects of binge drinking, as can a person’s genetic makeup and any medical or mental health conditions that may be present. Alcohol may stay in a woman’s body longer and have a more damaging effect on the body’s organs even though men are more likely to drink in larger quantities than women, the CDC reports.

Additionally, one out of every two women between the ages of 18 and 44 (considered the age for childbearing) drink alcohol, 15 percent binge drink, and over 7.5 percent drank while pregnant, the CDC states. Alcohol passes directly through the body to the placenta and can cause a variety of problems for an unborn baby, including birth defects like fetal alcohol syndrome, sudden infant death syndrome (SIDS), or cause a miscarriage. Binge drinking causes alcohol intoxication, which can have a range of potential consequences and side effects.

Potential Side Effects After Binge Drinking 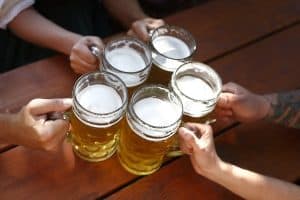 Alcohol is a socially acceptable, and legal for those over the age of 21, mind-altering substance that may be safely used in moderation. It is a central nervous system depressant that reduces the body’s stress response by increasing levels of the neurotransmitter gamma-aminobutyric acid (GABA), which acts as a natural tranquilizer and lowers anxiety levels, blood pressure, heart rate, and body temperature. Dopamine levels, which are pleasure-inducing neurotransmitters, are also raised with the presence of alcohol in the bloodstream. When people drink, they likely feel happy and relaxed.

As levels of alcohol increase and more alcohol is consumed, alcohol can begin to impair a person’s ability to think clearly and make good decisions, as well as motor coordination and reflexes. Inhibitions are lowered, making a person more likely to engage in behaviors that they normally wouldn’t engage in. Risk-taking behaviors may increase, leading to hazardous sexual encounters, potentially resulting in unwanted pregnancy or the contraction of a sexually transmitted disease like HIV/AIDS or hepatitis.

Accidents and injuries are also common side effects of alcohol intoxication or impairment. In 2013, more than 10,000 Americans were killed as a result of an alcohol-impaired motor vehicle crash, the CDC reports. Crime rates and violent behaviors also increase with alcohol consumption, as the National Council on Alcoholism and Drug Dependence (NCAAD) reports that alcohol is a contributing factor in 40 percent of all violent crimes.

Binge drinking accounts for more than three-quarters of the almost $250 billion dollar price tag attached to excessive drinking in the United States. This total consists of the costs associated with lost work production, health care, and criminal justice and legal expenses in 2010, the CDC publishes.

Binge drinking regularly can lead to heavy drinking which is eight or more drinks a week for a woman, and 15 or more drinks in a week for a man, the CDCreports. Chronic episodes of heavy drinking may lead to a dependence on alcohol. Alcohol dependence impacts a person in both physical and psychological ways. Someone who is dependent on alcohol will likely suffer difficult withdrawal symptoms when alcohol isn’t present in the bloodstream.

Alcohol dependence often morphs into addiction when the compulsion for alcohol takes over, and an individual no longer controls the amount or frequency of drinking. Alcohol addiction not only negatively impacts a person’s family life, personal relationships, grades at school, production or attendance at work, and emotional wellbeing; it can also increase the risks for developing certain kinds of cancers, like esophageal, throat, mouth, larynx, breast, or liver cancer. Kidney and liver failure and disease are common side effects of alcohol addiction as are cardiovascular problems, issues controlling blood sugar and pancreatitis, increased risk for stroke, stomach ulcers, potential brain damage, high blood pressure, heart attack, and a weakened immune system. The Substance Abuse and Mental Health Services Administration (SAMHSA) reports that 17 million American adults battle an alcohol use disorder, and close to 90,000 people die each year due to excessive alcohol abuse.

Don’t let the devastating side effects of addiction go on for another day. If you or someone you love is struggling with addiction and are ready to start the treatment process, call us today at . Oxford Treatment Center, American Addiction Centers’ inpatient alcohol rehab center in Mississippi, is ready to help you get the treatment you need today.

Signs of an alcohol overdose include:

One of the most dangerous short-term side effects of binge drinking is the potential for an overdose on alcohol. This is caused by alcohol poisoning when ethanol, the active chemical in alcohol, is no longer able to be safely broken down by the body. The CDCreports that there are, on average, about six alcohol poisoning fatalities each day in the United States.

The risk for a fatal alcohol overdose increase when alcohol is mixed with other drugs, especially central nervous system depressants like opioids and benzodiazepines. Mental health or medical conditions can also increase the potential hazards of overdose.

Alcohol poisoning is a medical emergency, and immediate medical attention is needed. Prompt medical care may be able to reverse some of the damage done by binge drinking.

If you, or someone you loved, engage in regular binge drinking, professional help may be needed to stop.

alcohol
Prefer getting help via text?
We're available 24/7 via text message. Signup below for access to our team when its convenient for you!
and many more...
✕
Instantly Check Your Insurance Coverage
Your information is safe & secure
At Oxford, we accept most types of private (non-government) insurance and offer a variety of payment options.
You can quickly and privately check your insurance benefits to see if you're covered for addiction treatment services. We’ll be able to tell you if your provider is in network with Oxford Treatment Center and all American Addiction Centers locations.
This means your treatment may be FREE1 depending on your policy, copay, and deductible.
Your Next StepsFind help & resources for your drinking or learn more about Oxford.