Dangers of Mixing Valium and Alcohol

An anti-anxiety drug that was once the most popular psychiatric medication in America, Valium is still being prescribed at high rates. In fact, 14 million prescriptions were given out in 2009, according to Forbes.

Valium is a benzodiazepine drug, and in its generic form, it is called diazepam. The Journal of the American Medical Association, JAMA Psychiatry, reports that in 2008, more than 5 percent of Americans between the ages of 18 and 80 were prescribed at least one benzodiazepine medication. Benzos, as benzodiazepines are often called, are central nervous system depressant medications that slow the body’s response to stress, thus reducing anxiety levels. Heart rate, blood pressure, respiration, and body temperature are all lowered as well.

Alcohol is also a central nervous system depressant and the most used addictive substance in America, as published by the National Council on Alcoholism and Drug Dependence (NCADD). The National Institute on Alcohol Abuse and Alcoholism(NIAAA) reports that close to 90 percent of all adults in the United States admitted to drinking alcohol at least once in their lifetime as of 2014. Most of the time, alcohol use is not a cause for concern, and its consumption is not considered to be high risk. Similarly, Valium, when used as directed and under the watchful eye of a trained medical provider, can be beneficial. These two substances should not be combined, however. The US Food and Drug Administration places warnings in the labeling information for Valium, stating that mixing it with other central nervous system depressants, like alcohol, can have unintended and negative consequences.

Valium and Alcohol Side Effects

Side effects of both Valium and alcohol intoxication can include:

Both alcohol and Valium have similar effects on brain chemistry and the body. For instance, both increase levels of some of the brain’s chemical messengers, or neurotransmitters, specifically dopamine and gamma-aminobutyric acid (GABA). Dopamine is a naturally occurring chemical in the brain that helps with mood regulation, impulse control, and some memory functions. A spike in dopamine amplifies feelings of pleasure and happiness. GABA, on the other hand, is a kind of natural tranquilizer, dampening the “fight-or-flight” reaction and promoting relaxation and sedation. When two substances like alcohol and Valium are taken at the same time, levels of dopamine and GABA are increased even more than they would be if only one of these substances was taken. This can cause a person to become intoxicated much faster.

Taking both of these substances together can exacerbate all of the potential side effects of each drug and cause someone to become drunk or intoxicated much faster, and from lower doses, than when only one substance is taken. The lowered inhibitions and increased sociability can lead to increased risk-taking behaviors with possible long-term side effects. Individuals may engage in potentially harmful sexual encounters, leading to unwanted pregnancy or the contraction of an infectious or sexually transmitted disease. Memory functions are also impaired by both of these substances, and people may have no recollection of entire periods of time while under the influence.

Individuals have an increased risk for being injured or in an accident when taking both of these substances together. According to the National Highway Traffic Safety Association (NHTSA), drinking alcohol in conjunction with taking diazepam (Valium) greatly increases sedation, drowsiness, and impaired memory functions and motor skills. Doing so also decreases reaction time, mental alertness, and the ability to divide attention. This makes driving while taking Valium and drinking alcohol even more hazardous than it is when just consuming one of these substances. NHTSA reports that a crash is more than twice as likely if a driver is under the influence of a benzodiazepine drug and alcohol.

Can You Overdose on Valium and Alcohol?

Drug overdose rates are at an all-time high, as the Centers for Disease Control and Prevention (CDC) publishes that close to 50,000 people died from a drug overdose in 2014 in the United States. Mixing two like substances (e.g., two central nervous system depressants like alcohol and Valium) can increase the risk for a potentially life-threatening overdose.

In 2010, alcohol was involved in nearly a quarter of all benzodiazepine overdose fatalities, The CDC publishes. The Drug Abuse Warning Network(DAWN) further reports that alcohol was a factor in over 20 percent of all emergency department (ED) visits involving the abuse of a benzodiazepine drug in 2010. When taken together, alcohol and Valium can slow breathing rates, and lower blood pressure and heart rate to dangerous levels.

Confusion, blurred vision, extreme drowsiness, muscle weakness, decreased coordination, agitation, blurred vision, cold and clammy skin, hallucinations, and a potential loss of consciousness are all possible signs of an overdose, which can result in coma or even death without swift medical attention. 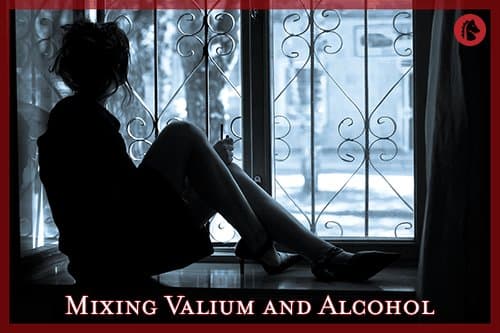 Taking Valium outside of the bounds of a legitimate and necessary prescription is considered drug abuse. In 2014, an estimated 330,000 people were currently abusing a prescription sedative drug at the time of the National Survey on Drug Use and Health (NSDUH). In addition, just over 16 million American adults battled addiction to alcohol in 2014, NIAAA reports.

These two substances may be intentionally combined in order to amplify the mellowing effects, or the “high,” produced by one or the other. Since these substances interact in the brain in a similar fashion, abusing them simultaneously can increase the level of dependence more rapidly than taking only one at a time. When the brain becomes dependent on Valium and/or alcohol, difficult withdrawal symptoms can occur when one or both of these substances is processed out of the body.

These withdrawal side effects from both alcohol and benzodiazepines can even be potentially life-threatening and may include:

Withdrawal symptoms are the result of the brain attempting to restore balance to its chemical makeup. Since functions of the central nervous system have been depressed and levels of GABA and dopamine were artificially increased, when Valium and/or alcohol then leave the body, the brain takes time to get back to producing and transmitting these neurotransmitters in its normal fashion. When levels of dopamine and GABA are low, a person feels depressed, stressed, fearful, and anxious, and often has trouble sleeping. The body experiences a kind of rebound, and side effects can be significant.

Withdrawal symptoms and cravings can be intense enough to encourage a person to keep taking Valium and/or drinking alcohol to keep them at bay. A person may then lose control over their ability to regulate their drinking or drug taking, and addiction may be the result.

When someone abuses multiple substances at a time, such as both Valium and alcohol, complications can arise during detox and treatment for addiction. Medical detox can help a person to withdraw safely from both substances. It should be followed by a specialized addiction treatment program that focuses on polysubstance abuse.

Don’t let the devastating side effects of addiction go on for another day. If you or someone you love is struggling with addiction and are ready to start the treatment process, call us today at . Oxford Treatment Center, American Addiction Centers’ drug and alcohol rehab facility in Mississippi, is ready to help you get the treatment you need today.

alcoholbenzodiazepinessedativesvalium
Prefer getting help via text?
We're available 24/7 via text message. Signup below for access to our team when its convenient for you!
and many more...
✕
Instantly Check Your Insurance Coverage
Your information is safe & secure
At Oxford, we accept most types of private (non-government) insurance and offer a variety of payment options.
You can quickly and privately check your insurance benefits to see if you're covered for addiction treatment services. We’ll be able to tell you if your provider is in network with Oxford Treatment Center and all American Addiction Centers locations.
This means your treatment may be FREE1 depending on your policy, copay, and deductible.
Your Next Steps