The Fastest (and Most Effective) Ways to Curb Alcohol Cravings 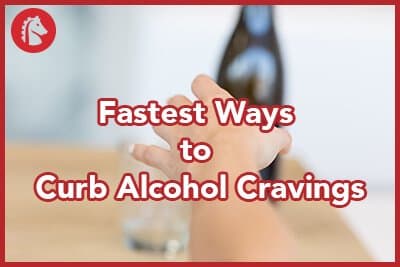 One of the major obstacles to recovery from alcohol use disorder is having to deal with cravings for alcohol. Cravings are response patterns that are programmed in people and appear as a result of environmental conditions, changes in mood, stress, or other types of triggers that prime these response patterns. Although sometimes cravings may appear to simply come out of nowhere, they are most often triggered by some environmental situation, feeling, or memory that one has about former alcohol abuse.

Numerous environmental conditions can act as triggers for cravings. Many of the policies of well-known recovery groups, such as Alcoholics Anonymous (AA), advise members to avoid people, places, and things that are associated with one’s prior use of alcohol. In addition, the acronym HALT (for Hungry, Angry, Lonely, Tired) is often used to remind individuals in AA of the types of conditions that are very likely to foster cravings and spur a relapse to alcohol.

Cravings are vivid recollections that are emotionally driven by the pleasant reinforcing effects that continued to drive use of alcohol. They represent powerful reinforcements to engage in the use of alcohol for many individuals who are in recovery. Cravings are often very visceral in nature, such that one can actually experience the reinforcing effects that one used to get from drinking alcohol and forget all of the negative issues that resulted from such use. In some cases, cravings may become so powerful that people feel like they are unable to resist them, although this is certainly not the case. Cravings often spur an internal debate with oneself over whether one should just give in to them this one time or continue to remain abstinent.

Some individuals may even experience cravings as a result of their participation in therapy, AA meetings, or other activities associated with recovery. This may spur an even more difficult internal debate for them.

Triggers and cues are different names for the same type of situation that leads to a priming or activation of a craving in an individual. They can be very personal and subjective in nature, or they can be quite generalized and occur over many individuals. The effects of cues and triggers produce both physical and mental changes that eventually are interpreted as a craving.

In a sense, triggers produce changes that are very similar to the types of changes that occur when one is about to be rewarded.

In order to prevent relapse, addiction treatment specialists will rely on two major categories of intervention. The individual in recovery would be wise to choose alternatives from both categories as opposed to focusing on only one for maximum success in dealing with cravings quickly and efficiently.

Some of the major medications are outlined below.

Medications can only address the physiological issues associated with cravings and reduce them. Medications do not address issues dealing with cues and triggers in the environment that can lead to cravings. Instead, behavioral interventions that do not use medical management techniques can be used to address triggers and to also directly reduce cravings in both their intensity and number.
Behavioral interventions attempt to help individuals recognize triggers, change the feelings associated with triggers, and learn to reduce the intensity of any cravings they may experience.

Some of the more effective behavioral interventions include:

Typically, the best source to learn behavioral interventions to deal with cravings is in formal substance use disorder therapy. There are numerous different techniques that can be utilized for different individuals to deal with cravings and reduce the risk of relapse. Therapists can instruct individuals in progressive muscle relaxation and diaphragmatic breathing that can be learned rather rapidly, and these can become tools to deal with cravings. Individuals can then focus on the more complicated aspects of cravings, such as learning about cravings, using distraction techniques, understanding triggers, etc. Individuals can also benefit from a combination of medication and behavioral interventions to address their cravings.

There are other important strategies that can be useful in dealing with cravings.

Finally, it is important for individuals in recovery from an alcohol use disorder to be able to recognize the generalized signs that a relapse may be on the horizon.

These generalized indicators include:

There is no one-size-fits-all approach or a quick fix to dealing with cravings. Expect the inevitable onset of cravings for alcohol that occurs during recovery, understand triggers, and develop a plan of action to deal with cravings.