Spice is a specific formula of synthetic marijuana, or synthetic cannabinoid, which is now officially illegal according to the Drug Enforcement Administration. Synthetic cannabinoids are intoxicating, dangerous drugs that are completely manufactured in a lab. Types of synthetic marijuana are chemicals sprayed on plant matter to appear similar to dried marijuana and sold in colorful packages as “incense” or “potpourri.” The manufactured chemical structure is similar to THC, the primary intoxicating chemical found in organic marijuana, but it has less predictable effects.

Spice and other types of synthetic marijuana are smoked, used in a vaporizer, or brewed into tea. There are very few studies on the effects of synthetic cannabinoids like Spice, but the drugs do bind to the same receptors in the brain as marijuana, so they induce similar, but much stronger effects.

Some of the worst side effects of Spice can include loss of consciousness, elevated blood pressure leading to cardiovascular damage, and psychotic episodes involving violence toward oneself or others.
Research into the effects of Spice and synthetic cannabinoids shows that these manufactured chemicals can be 3-5 times more intense than organic marijuana. These effects can include:

Spice, like other synthetic cannabinoids, can be addictive. People who become physically dependent on, tolerant to, or addicted to Spice can experience withdrawal symptoms when their body begins to detox from the drug.

Because Spice and other synthetic cannabinoids are so potent, side effects can quickly become dangerous and require hospitalization. These include seizures, renal failure, heart problems, and psychosis.

When a person begins to withdraw from Spice, however, the primary discomfort comes from the mental and emotional effects of withdrawal. In particular, lethargy and depression can lead a person to take more Spice because they do not want to feel bad. Since Spice’s half-life is so short, the euphoric effects of Spice can end quickly, and withdrawal symptoms can begin as soon as the mood-lifting effects begin to dissipate. An individual may take more of the drug before all the chemicals have cleared their system, just to avoid withdrawal symptoms. This can lead to overdose very rapidly.

Negative and physically dangerous effects of Spice and other synthetic marijuana strains can, in some instances, continue to affect the individual for a long time after use. Anecdotal reports suggest that, several days and even a week later, a person who takes Spice once can still suffer side effects from the drug. An article originally published in Germany, based on German medical research, highlighted one case study involving a man who had chronically abused Spice. The study showed he primarily experienced intense and psychologically distressing cravings for the drug while he experienced withdrawal. This caused him to continue to abuse Spice, even though he knew it caused mental impairment and led him to neglect his job. The individual also experienced withdrawal symptoms like:

Some of the chemicals commonly found in Spice include:

Because these drugs are fairly new, and there is not much medical research on the long-term effects of Spice addiction, most medical professionals have a better understanding of overdose than withdrawal. Spice and other synthetic marijuana strains can rapidly lead to overdose or hospitalization due to psychosis. Confusion, agitation, seizures, convulsions, and an increased risk of rhabdomyolysis and renal failure are overdose symptoms.

According to the DEA, synthetic marijuana strains like Spice can remain in the body for a long time, which can complicate withdrawal. Because there can be variance in potency of the drug in each package, and the chemical structure can be slightly different, Spice can remain in the body for varying amounts of time. Some research indicates that the average half-life of most Spice is about 75 minutes; therefore, it takes 6-7 hours for the body to clear Spice completely. Some chemicals found in Spice, however, clear the body in as little as two hours.

Each of these chemicals has a different half-life, and they are found in widely varying amounts in different Spice blends. This unpredictability makes Spice a very dangerous drug to use, even once. In most cases, the chemicals found in Spice are unlikely to remain in the body longer than 24 hours after one dose. 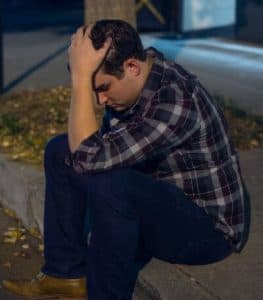 The German case study suggests that withdrawal symptoms from Spice, particularly psychological symptoms like cravings, insomnia, depression, and anxiety, can last up to a week with medical oversight. Without help from medical professionals, however, withdrawing from Spice is unlikely to be successful due to the intensity of the symptoms.

The study also reported that the individual did not experience withdrawal during the first two days of medical observation. Psychological unrest began at the end of the second day, and by the fourth day, the individual reported that he experienced strong cravings and anxiety, along with nightmares, tremors, sweating, and nausea. He also began to experience hypertension, numbness in his right arm, and a feeling of electrical shocks in his body.

Although he continued to experience increased blood pressure and heartbeat by the end of the week, on the seventh day, the man reported that he felt better. The doctors working with him administered small doses of benzodiazepines to help him sleep and improve his anxiety, and monitored him for potential heart conditions.

Getting help from a rehabilitation program is the best way to overcome Spice abuse and addiction. Although the chemicals found in Spice strains are often completely out of the body within 24 hours, the intensity of depression, cravings, and other withdrawal symptoms can prevent a person from detoxing on their own. Working with a doctor and a rehabilitation program can relieve psychological withdrawal symptoms, as medical professionals may utilize small doses of prescription medications to stabilize mood, ease anxiety, and lessen depression. Medical oversight can also help with more serious physical side effects, like heart palpitations or kidney problems, which might develop with chronic abuse over time.

A rehabilitation program will be able to offer individual and group therapy, along with other social support, to overcome the psychological problems related to addiction. Detox is a very important step to ending an addiction to Spice, but it is the first step and further treatment is needed. Getting help to overcome cravings, mood swings, and other side effects associated with Spice addiction is important for a person’s long-term health.

It’s never too late to reach out for help. If you or someone you love is struggling with the devastating side effects of addiction and are unsure of where to turn, call us today at . Oxford Treatment Center, American Addiction Centers’ Mississippi drug detox facility, is ready to help you get the treatment you need today.

withdrawal
Prefer getting help via text?
We're available 24/7 via text message. Signup below for access to our team when its convenient for you!
and many more...
✕
Instantly Check Your Insurance Coverage
Your information is safe & secure
At Oxford, we accept most types of private (non-government) insurance and offer a variety of payment options.
You can quickly and privately check your insurance benefits to see if you're covered for addiction treatment services. We’ll be able to tell you if your provider is in network with Oxford Treatment Center and all American Addiction Centers locations.
This means your treatment may be FREE1 depending on your policy, copay, and deductible.
Get the Info & Help You NeedWe offer a range of treatment programs. Learn about your options.