Youth Marijuana Use by State

The use of marijuana is becoming increasingly more common across the United States, and the perceived risk associated with using it has declined among teenagers in the past few decades. Alongside this trend, rates of use in this age group have increased. According to federal government estimates, 23.9 percent of 10th graders have used marijuana within the past year, while 35.6 percent of 12th graders have.

Marijuana has been legalized in a number of states but still needs to be approached with caution, especially by individuals under the age of 18. The U.S. saw a 21% increase in drug-related emergency department visits that involved marijuana between 2009 and 2011. This statistic underlines the importance of education about the risks associated with drug use of any kind.

We decided to take a closer look at the figures related to youth marijuana use across the United States in order to see how each state compares. We used data from the 2016 and 2017 SAMHSA National Survey on Drugs Use and Mental Health, which collects information about drug use habits from Americans across the country. We specifically looked at the number of individuals under 18 who reported using marijuana within the past year. Our results show notable differences among states — read on for all of our findings.

Youth Marijuana Use by State 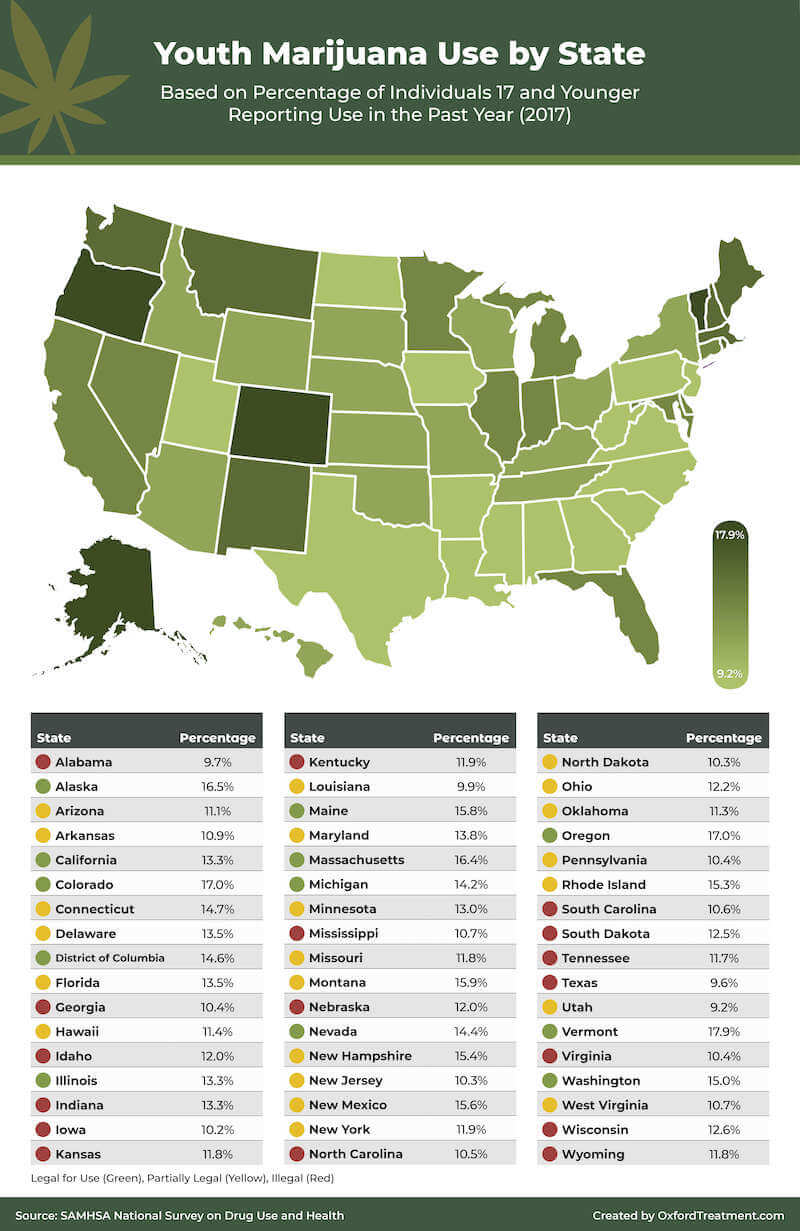 First we looked at the rate of marijuana use among individuals 17 and younger in each U.S. state and District of Columbia. We also identified the legalization status for each one for an additional comparison. The three states with the highest rates of use for minors are Vermont (17.9%), Oregon (17.0%), and Colorado (17.0%), which are also states where the substance is legal for use. Those with the lowest rates are Utah (9.2%), Texas (9.6%), and Alabama (9.7%), all three of which prohibit the use to at least some degree.

Year-Over-Year Change in Youth Marijuana Use by State 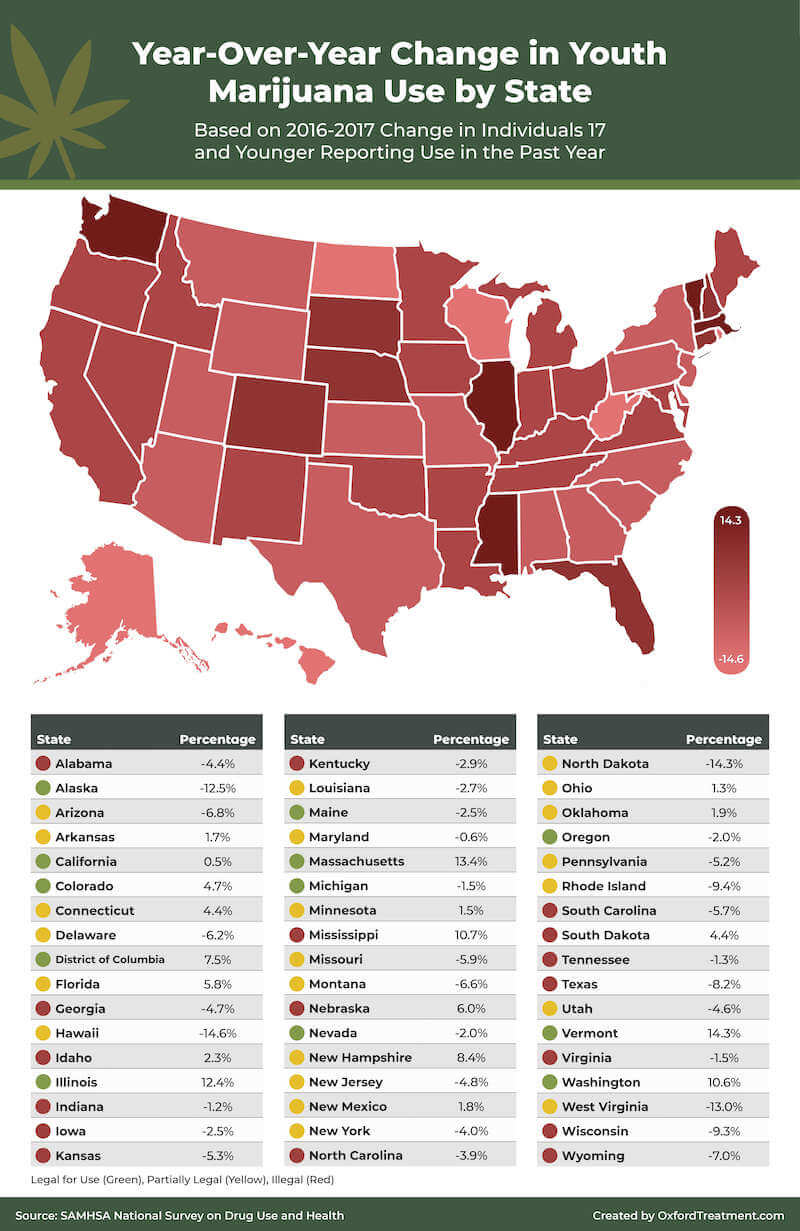 Youth Marijuana Use Across the United States 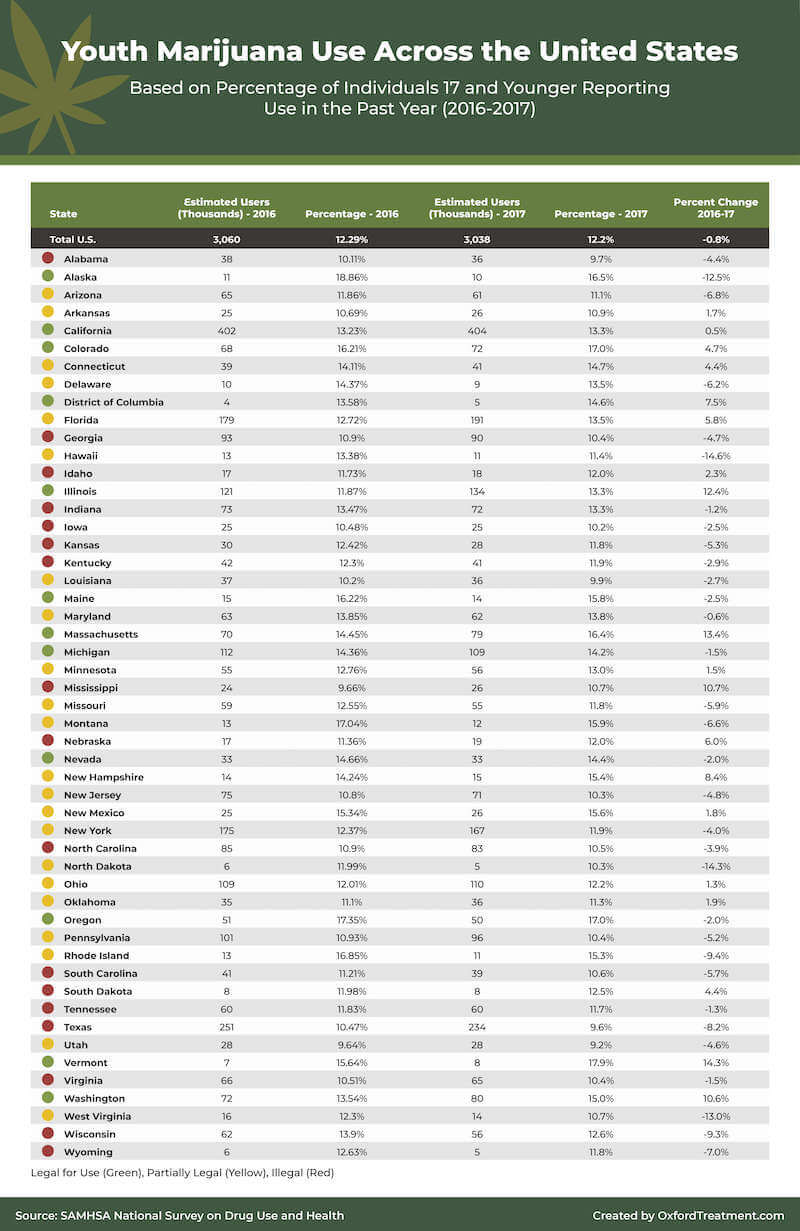 Finally, we wanted to show the results for 2016 and 2017 together in order to provide context to these year-over-year numbers. This includes percentage rates as well as estimates of the count of users (thousands). Overall, the United States has seen a 0.8% decrease in the rate of youth marijuana use (2016-2017), which is a somewhat promising figure. Unfortunately that still means that 12.2% of youths use the substance, and that there is still progress to make.

The treatment of marijuana abuse and mental health disorders is a focus of our treatment center in Mississippi. If you’re concerned about someone you know who has a substance use disorder, learn more about how our program can help.

CAN I USE THIS INFORMATION?

herbalmarijuana
Prefer getting help via text?
We're available 24/7 via text message. Signup below for access to our team when its convenient for you!
and many more...
✕
Instantly Check Your Insurance Coverage
Your information is safe & secure
At Oxford, we accept most types of private (non-government) insurance and offer a variety of payment options.
You can quickly and privately check your insurance benefits to see if you're covered for addiction treatment services. We’ll be able to tell you if your provider is in network with Oxford Treatment Center and all American Addiction Centers locations.
This means your treatment may be FREE1 depending on your policy, copay, and deductible.
Your Next StepsFind help & resources or learn more about Oxford.