Marijuana: What Happens during a Body High? 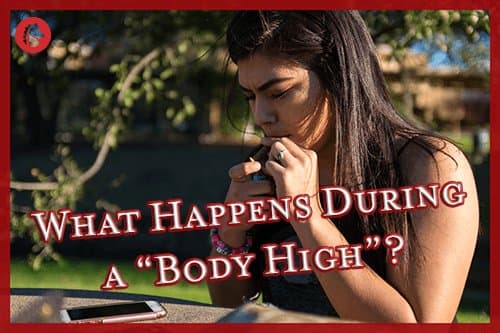 Marijuana is a psychoactive drug that has effects on both the mind and body. Derived from the cannabis plant, it is the most popular illicit drug in the United States.

In the 2014 National Survey on Drug Use and Health (NSDUH), researchers found that 22.2 million people over the age of 12 used marijuana in a 30-day period that year, which classified them as current users. This number corresponds to 8.4 percent of the population over the age of 12.

Despite the fact that marijuana is one of the most commonly abused drugs, the National Institute on Drug Abuse (NIDA) reports that the Centers for Disease Control and Prevention does not track death rates for marijuana overdoses because people do not overdose on marijuana alone; however, the drug has effects on the mind and body that can prompt individuals to take part in risky behaviors that could result in life-threatening complications and even fatalities.

What Is A Body High?

Marijuana has effects on the body, and some people call the sensations that result in a “body high.”

When people talk about the body high that results from marijuana use, they are often talking about the effects it actually has on the brain and how they make the body feel. Because some of these symptoms are pleasurable, users may feel inclined to continue using marijuana, which can eventually lead to dependence on the drug

Ultimately, THC interferes with the functioning of the endocannabinoid system and essentially slows down communication between cells in the nervous system. This can result in intense relaxation. Coupled with feelings of euphoria and an altered perception of time, color, and space, people essentially feel weightless and uninhibited, and they often equate this feeling to a body high.

According to the Drug Enforcement Administration (DEA), marijuana’s effects on the body include:

Short-Term and Long-Term Effects On The Brain

Marijuana is typically smoked or consumed, and it has both short-term and long-term effects on the brain. When individuals smoke marijuana, delta-9-tetrahydrocannabinol (THC), which is the mind-altering component of the drug, passes from the lungs to the bloodstream quickly. The THC then travels to the brain and other organ systems throughout the body. When smoked, the effects of THC come on in a matter of minutes. These effects typically peak within 30 minutes and may last for a couple of hours before they subside entirely. When marijuana is consumed in food or drink items, it typically takes 30 minutes to one hour for individuals to feel the effects.

Because the THC in marijuana acts on the same receptors that are responsible for normal brain development and function, consistent use of this drug also has long-term effects, especially in young adults.

According to NIDA, the short-term side effects of marijuana include:

The Dangers of Getting High

Although the effects of marijuana may not seem as dangerous as those of other drugs, the DEA has classified it as a Schedule I drug. That means it has a high potential for abuse with no current widely accepted medical applications. Regular marijuana use can also affect an individual’s quality of life in a variety of ways.

For some people, marijuana opens the door for abusing other, more potent substances. According to the Foundation for a Drug-Free World, 62 percent of adults over the age of 26 who used marijuana before the age of 15 used cocaine at some point in their lives, and 9 percent tried heroin at least once.

Although marijuana may not be as addictive as cocaine or heroin, it is still possible to develop dependence on the drug. Dependence occurs when individuals experience withdrawal symptoms like irritability, cravings, and trouble sleeping if they stop using marijuana. This dependence can eventually evolve into addiction if they develop a compulsive need to use that interferes with their personal or professional life.

Treating marijuana addiction is similar to treating other substance use disorders, and it typically begins with medical detox. Individuals suffering from marijuana use disorder can find a professional treatment facility that will guide them through the detox phase. Comprehensive therapy should follow detox.

Don’t let the devastating side effects of addiction go on for another day. If you or someone you love is struggling with addiction and are ready to start the treatment process, call us today at . Oxford Treatment Center, American Addiction Centers’ Mississippi drug treatment center, is ready to help you get the treatment you need today.

herbalmarijuana
Prefer getting help via text?
We're available 24/7 via text message. Signup below for access to our team when its convenient for you!
and many more...
✕
Instantly Check Your Insurance Coverage
Your information is safe & secure
At Oxford, we accept most types of private (non-government) insurance and offer a variety of payment options.
You can quickly and privately check your insurance benefits to see if you're covered for addiction treatment services. We’ll be able to tell you if your provider is in network with Oxford Treatment Center and all American Addiction Centers locations.
This means your treatment may be FREE1 depending on your policy, copay, and deductible.
Your Next StepsFind help & resources