Marijuana Use Across the U.S. – How Has it Changed?

As public opinion surrounding marijuana is at an all-time high and legalization trends continue, one could assume that marijuana use across the U.S. has substantially increased over the last few years. We wanted to know whether or not this was true, so we decided to dive into the numbers, state by state, of marijuana usage rates.

As states across the U.S. have legalized marijuana — whether for medicinal use only or for medical and recreational consumption — its use has become more mainstream. According to a 2021 Gallup poll, 49% of adults in the United States report that they have tried marijuana at least once — up from 45% in 2017 and 2019. Further, Pew Research reports that two-thirds of Americans think that marijuana should be legalized.

Combine these social trends with the fact that marijuana use is now fully legal in 21 states and approved for medical use in another 16 states, and it is easy to see how marijuana has become the third most commonly used addictive substance behind alcohol and nicotine, and the most commonly used federally illegal drug in the United States.

Marijuana Use by State

Using data from the respective years’ National Survey on Drug Use and Health, we compiled the percentage of the population over 18 years old who have used marijuana in the last year. Additionally, we calculated the percent change in each state’s marijuana usage rate from 2014-2017. Read on to discover the interesting trends we found. 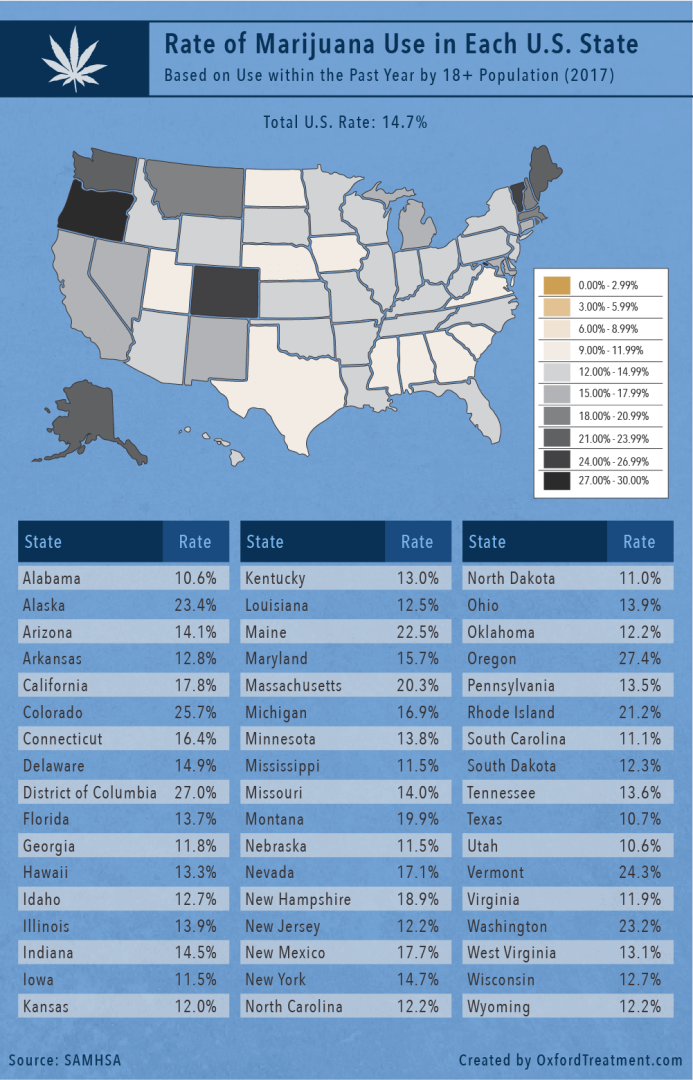 On the other end of the spectrum, we observed the lowest overall percent change in marijuana usage rates from 2014 – 2017 in Georgia (1.9%), Alabama (2.6%), and Arizona (2.9%). While medicinal marijuana is legal to some extent in these states, marijuana usage remains criminalized, which could account for the low usage rates, or simply low reporting due to fear of legal repercussions. 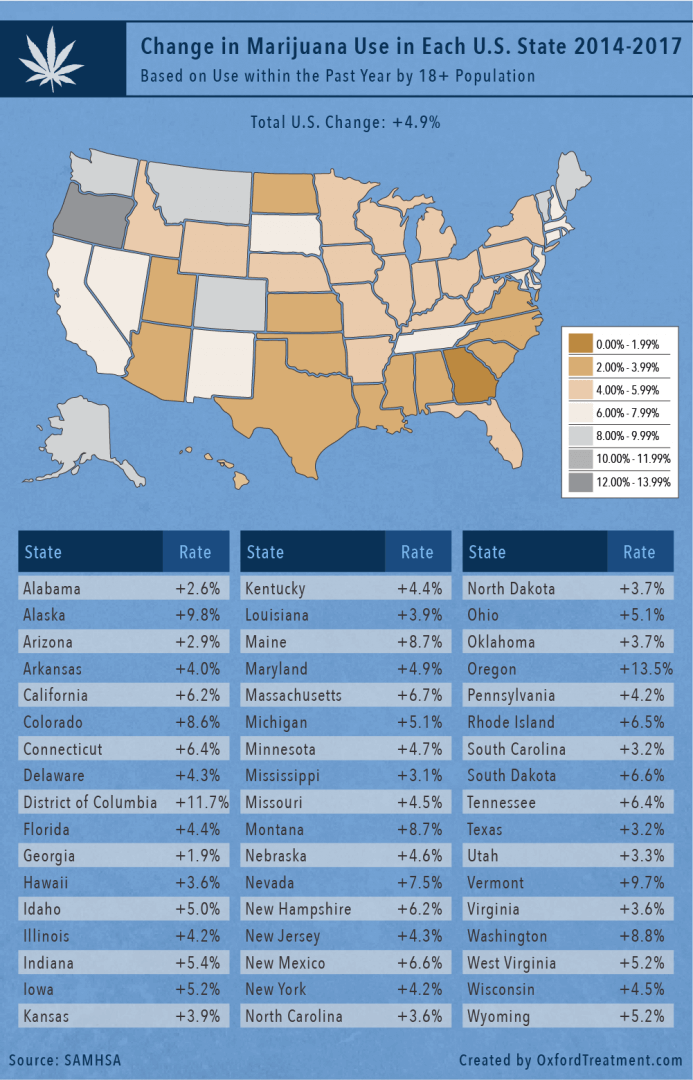 We found it interesting that in the Pacific Northwest, marijuana usage fluctuates quite significantly, from 27.00 – 30.00% in Oregon to 21.00 – 23.99 % in Washington to only 12.00 – 14.99% in Idaho. Idaho is one of the only states in the western part of the United States to still fully criminalize marijuana. Of all the states where marijuana is fully legalized, usage was lowest in Michigan, at 16.9%.

An important question that comes along with the trend of marijuana legalization is whether this legislation increases overall marijuana usage, which brings us to our next insight from the study.

Marijuana Legalization and Use Rates

2014- 2017 was an eventful time for marijuana-based legislation, and as it turns out, marijuana use reflects these changes in legislation. In those three years, states like New York, Minnesota, Pennsylvania, Ohio, and West Virginia legalized medical cannabis. Following that legislation, those states saw a percent change in marijuana use close to the total U.S. percent change in cannabis use of 4.9% – New York’s marijuana usage increased by 4.2%, Minnesota by 4.7%, Pennsylvania by 4.2%, Ohio by 5.1%, and West Virginia by 5.2%.

On the other hand, as we saw with Oregon and the District of Columbia, legalizing recreational marijuana use had a staggering impact on marijuana usage, both of those states experiencing a more than 8% increase in a single year.

Getting Help for Marijuana Misuse and Addiction

If you or someone you love is struggling with dependence on or addiction to marijuana, there is help. At our inpatient drug rehab in Etta, MS, we help people get on the road to recovery and back to living the life they deserve.

For more information about our different levels of addiction treatment, contact our compassionate and knowledgeable admissions navigators at . They’re on hand 24/7 to answer any of your questions, including about what to expect in treatment, how to start the rehab admission process, and using your insurance to pay for rehab.