Potentiating Tramadol: The Dangers to Watch Out For

Think of the brain as a delicately calibrated machine. It’s nourished by blood and oxygen, and its chemical makeup is dictated by biology. Prescription drugs can upset this balance, and sometimes, that’s a good thing.

People in pain can benefit from opioid drugs like tramadol, as the pain signals originating in the brain can be amended through the chemical changes the drug brings about.

Those same beneficial chemical changes can also spur a completely different process, and that secondary process can lead to addiction. When an addiction takes hold, people can begin to make terrible choices to support that addiction. Potentiating tramadol is one such choice.

What You Need to Know About Tramadol 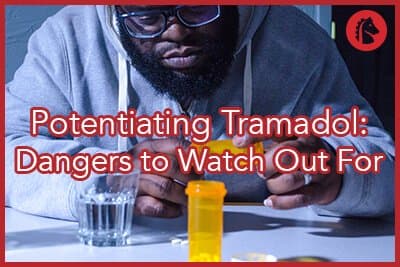 Tramadol is a prescription medication that is designed to relieve pain that is moderate or severe. It belongs in the opioid, or painkiller, class. According to Mayo Clinic, it has been associated with both mental and physical dependence in people who use it for a long time.

People with a mental dependence on tramadol may feel desperate to take the drug between doses. They may find that their thoughts center on getting more of the drug. They may grow panicked when they see their drug supplies running low.

People with a physical dependence on tramadol may experience bodily symptoms when they stop taking the drug. These symptoms are typically described as flulike, and they may include:

These symptoms may be mild, and they may only be considered bothersome. But in later stages of the addiction process, physical symptoms can be severe and life-threatening. For some people with tramadol addictions, these symptoms happen between doses.

Physical and mental dependence tend to work hand in hand in the development of an addiction. People who cut back may experience physical pain that makes the mental cravings and the need to avoid pain much stronger.

To avoid physical symptoms and mental distress, people who are addicted to pain medication need to keep taking that medication. But as the National Institute on Drug Abuse (NIDA) points out, people who are addicted may need to take more of the same drug in order to get the same high. The brain tends to grow accustomed to the presence of drugs, and it may not respond to low doses of a drug the person has been taking habitually.

As a result, people with addictions may need to take massive amounts of tramadol just to avoid withdrawal symptoms. Potentiating is a way of working around that addiction issue.
Concerned about treatment costs? Call now for FREE insurance and payment consultation.
Call Now (888) 513-2995 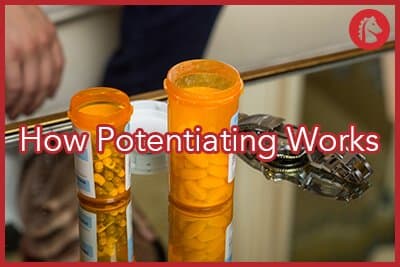 When this recreational abuse becomes habitual, and getting more of the target drug becomes very difficult, potentiation can seem like a good solution, as it allows the person to take the same amount of the drug and feel a bigger reaction.

NAM reports that potentiation is a drug/drug reaction. In the case of tramadol, a secondary drug is introduced that boosts the effect of tramadol. It’s a bit like asking a friend to help push a rock uphill. That’s easier to do when there are four hands available instead of just two.

For people with tramadol addictions, this helper drug helps to sustain the addiction, while allowing the person to avoid upping the tramadol dose. This can seem like a smart idea, but it comes with dangerous consequences.

If serotonin levels continue to rise, people can experience seizures. That seizure reaction can be brought about through potentiation.

In a study published in Psychiatry, researchers found that half of the 83 cases of tramadol seizures involved the use of other drugs, often antidepressants. The researchers note that seizures can happen when tramadol is taken alone, but seizures are much more common when other drugs are involved.

Antidepressants known as selective serotonin reuptake inhibitors (SSRIs) block reuptake of serotonin in the brain, according to Mayo Clinic. Since tramadol boosts serotonin levels, taking it with SSRIs is potentiation. The SSRIs make the serotonin tramadol produces much more effective.

Other prescription drugs, including amphetamines, can produce a similar effect. In a study in the Journal of Pain Symptom Management, authors report that amphetamines used in combination with drugs like tramadol tend to increase the effects of the opioids. Stimulants also help to counteract the sleepiness opioids can cause, and that increased sense of alertness could help an addicted person to take more opioids. This is a synergy on two fronts, and it could be remarkably dangerous.

Combatting the Abuse of Drugs 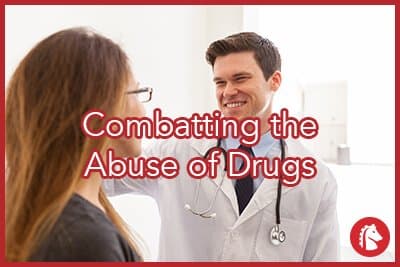 People who abuse prescription drugs like tramadol may do so under the mistaken belief that the drugs are safe. As NIDA points out, these medications are administered by medical professionals, and people may believe doctors just wouldn’t hand out anything that wasn’t safe. But tramadol can certainly be dangerous, and people who potentiate tramadol deliberately are exhibiting a classic sign of addiction.

People who have addictions persist in the use and abuse of drugs, even though they may know that the drug they’re taking isn’t safe or useful. The chemical changes triggered by the brain, and the physical and mental dependence that follows, will encourage them to keep using and abusing substances despite what their higher mind might say.

Recovering from a tramadol addiction isn’t as easy as simply taking the pills away. As an article by the National Drug and Alcohol Research Centre in Sydney points out, people can die due to complications from opioid withdrawal symptoms.

People who face a sudden cessation of opioids can experience severe vomiting and persistent diarrhea. These two symptoms can lead to dehydration, and since the person may not be able to drink fluids without vomiting, the cycle can continue unchecked for days. Severe dehydration can lead to delirium and organ failure, both of which could be fatal.

That’s why it’s vital for people with a tramadol addiction to access a medical detox program. Here, medical professionals use medications to soothe some of the more persistent signs and symptoms of withdrawal. They can offer alternate methods of hydration if vomiting is severe. They can provide distress therapy, so people undergoing these symptoms know that they’re moving through a natural process that will benefit them in time.

Once a person has completed medical detox, the drug may be removed from the body, but the habits the person has built up over a long period of drug abuse may remain. They may still have active contacts who can sell them drugs. They may have spaces they consider safe in which to use drugs. They may also have deep cravings for drugs that haven’t yet gone away.

A drug addiction treatment program helps people learn to deal with cravings in a safe and effective way. People may learn how to build up healthy habits that keep their minds and bodies active, so they won’t be overtaken by cravings. They may also learn how to avoid triggers to relapse, such as:

How to Help Someone Who Abuses Tramadol

Watching someone abuse tramadol can leave families feeling helpless, but there are so many things families can do. As an article in Psychology Today points out, families are in an excellent position to nudge someone toward help.

Families can talk about the addiction openly, and the more they know about how addiction works, the more helpful these conversations will be. Families can also help the person with the addiction to feel loved, supported, heard, and understood. This isn’t enabling the addiction. It’s recognizing the destruction an addiction can cause in an open, honest, and loving way.

Families that see potentiation of tramadol can, and should, open up the conversation about treatment. If that talk seems too tough and the words won’t come, tapping into a professional’s help can be a good approach. Addiction interventionists are adept at working as mediators between families and people with addictions. Interventionists can explain how an addiction works and how it is treated, and they can motivate someone to enter treatment.

Addictions flourish when they are left unaddressed. Conversations can change the cycle. The sooner families start talking, the better.