Mescaline Side Effects and Misuse 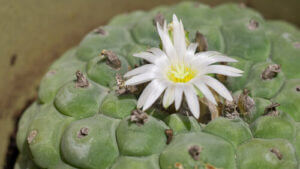 Mescaline is a naturally occurring chemical compound that is found in a number of species of cacti, most notably the peyote cactus.

The peyote plant has played a role in Native American ceremonial and medicinal rituals for as far back as 5,700 years ago.1 This longstanding tradition of use among indigenous peoples is why mescaline is legal for use in religious contexts in tribal nations. However, the substance itself is a Schedule I drug in the United States.2

While respecting its use in tribal ceremonies, the Drug Enforcement Administration holds the position that mescaline has no acceptable medical use and presents too great a risk of physical and/or psychological abuse for it to be made available for purchase or prescription.

Like most hallucinogens, mescaline is a serotonin receptor agonist; the drug stimulates the production of the serotonin neurotransmitter, which boosts positive moods and relaxation.3 Researchers suggest that mescaline excites certain neurons in the brain, leading to the well-known psychedelic effects.

Users experience very different sensory and perceptual experiences, such as:4

Changes in thought patterns may occur. A person taking mescaline might have:4

Taking mescaline might negatively affect those who are prone to anxiety. In such cases, the episodes of anxiety might last as long as a day or so.

Despite the bitter taste and relatively low potency, tolerance to mescaline can develop very quickly.4 This means that someone who uses mescaline no longer gets the same psychedelic effects from their usual dose, so they take more and more mescaline to try and chase the original sensation.

The returns are always diminishing, but the result is that the user becomes more and more dependent on the mescaline to achieve that sense of bliss and transcendence.

Notwithstanding the risk of a user needing greater amounts of mescaline, the plant presents no obvious withdrawal risks to users.4 Withdrawal normally occurs when a person’s body has become so accustomed to the chemical and psychological effects of a drug that it cannot function without the continued presence of the drug. Going without the drug for any period of time results in painful, distressing physical and psychological symptoms, which, if left uncontrolled, can compel the person to resume the substance abuse. The symptoms can also be dangerous in their own right.

In rare cases, mescaline users may be at risk of developing hallucinogen persisting perception disorder, a condition wherein the standard psychedelic effects of mescaline are present even though the drug has not been taken.7 The effects might take place when the user is doing something that requires concentration and coordination; this could interfere with job performance or academic work, or it could put lives in danger if heavy machinery or motor vehicles are involved.

Another area of risk is if pregnant women use mescaline. One report found an association between the active ingredient mescaline and fetal abnormalities.4

If you or someone you love is struggling with misuse of mescaline or another substance, call to speak with an admissions navigator. The clinical team at Oxford in Mississippi is committed to your recovery and can provide the support and addiction treatment program you need.