How Long Does GHB Stay in Your System?

GHB stands for gamma-hydroxybutyrate, which is a chemical that naturally occurs in the human body. The substance was first synthesized in the 1960s, introduced first in 1960 and then introduced as a medicine in 1963. GHB became a popular anesthetic throughout the 1960s because it is very relaxing, but the substance was abandoned by surgeons because it was found to have poor analgesic effects, although patients fell unconscious.

Because it causes a strong feeling of relaxation and causes people to pass out at higher doses, it became popular as part of narcolepsy treatment in the 1970s. Then, in the 1980s, health food stores began to market the substance as a fat-burner, muscle-builder, performance-enhancer, and stress-reliever. With greater access to this formerly prescribed medication, many people began getting sick. By 1990, there were over 30 reports of illness caused by GHB, so the Food and Drug Administration (FDA) ordered that it be removed from shelves. Between 1992 and 2001, there were 60 deaths associated with GHB, usually mixed with alcohol.

Many dietary supplement manufacturers began replacing GHB with related chemicals, usually GLB or 1,4-BL, which were equally dangerous and never approved for human consumption. Because of this widespread abuse, GHB and related chemicals were moved to Schedule I on the Controlled Substances Act (CSA) by the Drug Enforcement Administration (DEA), meaning they have no medical use and cause intense intoxication that is dangerous. There are still some prescription versions of GHB that are listed as Schedule III, but the doses are extremely low, and these medications are not prescribed widely.

Have you lost control of your GHB use? Answer a few brief questions to find out if you need help. Complete our free and confidential addiction questionnaire today.

Because GHB is predominantly found as a date rape drug, there are several drug tests that can measure whether a person has this chemical in their system. At high doses, blackouts or unconsciousness can last up to 24 hours after the drug has been taken. For doctors, this means that some drug tests may be more important than others.

GHB’s Half-Life and Testing for the Substance 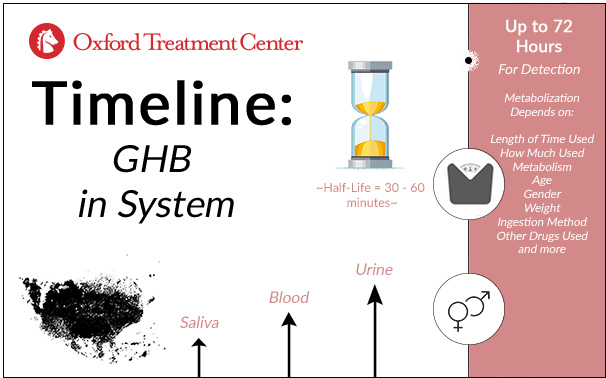 When used as an intoxicant or a date rape drug, the average illicit amount of GHB consumed is one to five grams, with about two teaspoons being the average that is mixed into a beverage. Effects begin within 15-30 minutes, although a person who consumes it by accident may not be able to differentiate the first effects from becoming drunk. Sedation and other effects typically last between three and six hours.

About 95 percent of this drug is metabolized by the liver, and it has a half-life of about 30-60 minutes. This means that 50 percent of GHB is eliminated from the body within one hour; on average, 1.83-5.5 hours are needed, depending on dose, to eliminate the drug from the body completely.Studies have shown that mixing GHB with alcohol increases how quickly the drug’s effects begin, which can be dangerous for a person who is accidentally dosed; however, alcohol also increases how quickly the drug is metabolized out of the body, so within 30 minutes to 1.5 hours, GHB may be completely eliminated from the body if it is mixed with alcohol.

One’s weight, body fat, and sex can affect how fast GHB is metabolized. Additionally, eating before taking the drug can slow down the drug’s absorption through the stomach lining. Taking GHB with food or just after eating decreases the absorption rate about 37 percent. Existing liver problems can also change how the drug is metabolized because most of it is processed in that organ. Kidney function problems may also affect how metabolites are excreted.

The remaining 5 percent of GHB metabolites move through the kidneys and bladder.

Since the drug has a short half-life, it may be difficult for average drug tests to detect GHB, especially urine tests; however, other drug tests can be more accurate.

Treatment for GHB Abuse or Poisoning

GHB is a very dangerous drug. Although it is not widely abused for recreational reasons, it can be given to victims of rape or sexual assault prior to the incident. Some people do abuse GHB to get high, however. Understanding how rapidly the effects of GHB begin, and then wear off, can help medical professionals appropriately test potential victims and manage withdrawal symptoms if a person abuses GHB and needs help ending their addiction.

Those accidentally poisoned by GHB should be hospitalized as soon as possible. A person who abuses GHB specifically to get high may also end up hospitalized due to overdose, and this provides an opportunity for medical professionals to briefly intervene and help the person get evidence-based addiction treatment. Medical supervision for detox followed by treatment in a rehabilitation program are the foundation of addiction treatment for many substances, including GHB.

club drugsdetectableghbsedatives
Prefer getting help via text?
We're available 24/7 via text message. Signup below for access to our team when its convenient for you!
and many more...
Your Next StepsFind help & resources or learn more about Oxford.