Dealing with GHB Withdrawal: What to Do (+ Timeline) 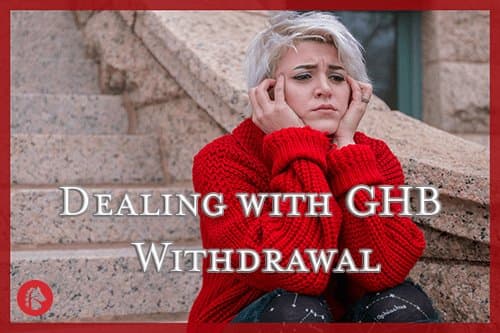 The drug GHB, or gamma-hydroxybutyrate, is a naturally occurring chemical produced by the human body, but when it is synthesized and consumed in large amounts, it can cause intense intoxication and lead to addiction. When the brain produces GHB naturally, it is a central nervous system (CNS) depressant that interacts with gamma-aminobutyric acid (GABA) receptor cells. Many of the relaxing and intoxicating effects that GHB can cause when it is abused are similar to alcohol and benzodiazepines, two of the most widely abused and very addictive substances.

The sedative-hypnotic properties of GHB were discovered in the 1960s, and it was recognized as a naturally produced chemical in 1963. Doctors began to use the drug as a surgical anesthetic because in large doses, GHB can cause someone to black out or even pass out very quickly. This practice was abandoned in the 1970s because it was discovered that GHB was not an effective analgesic, so people experienced too much pain during and just after surgery. It was also used as part of treatment for narcolepsy, but it was found to be less effective than other chemicals at inducing sleep.

Finally, in the 1980s, GHB began to be marketed as a dietary supplement, which could enhance performance. GHB can cause decreased inhibitions in lower doses. By the 1990s, there were over 30 reports of people taking these supplements and suffering severe illness or death, and thousands of people were hospitalized due to complications of taking too much GHB. By 2000, the Drug Enforcement Administration (DEA) and the Food and Drug Administration (FDA) had banned GHB from sale and moved the drug to Schedule I on the Controlled Substances Act (CSA) list. This means that GHB no longer has any recognized medical benefit in the US. It is dangerous, addictive, and can lead to illness or death.

GHB Withdrawal: Dangerous at Every Stage

Since 2000, GHB’s popularity as a substance of abuse has decreased. It is most often abused as a date rape drug, so the person who consumes it will likely not know they have taken it.

However, people who abuse GHB for recreational reasons may be:

People who suddenly quit GHB after abusing the drug for months or years are at risk of experiencing withdrawal symptoms, which are likely to be uncomfortable. Intense cravings increase the risk of relapse back into drug abuse.

Typical withdrawal symptoms from GHB include:

The harm caused by these symptoms alone can cause a person to begin abusing GHB again in an effort to stop the experiences. This puts a person at risk of overdose because their body will have a lower tolerance to the substance if the individual abuses it again.

Missing a dose can trigger the experience of withdrawal symptoms within just a few hours because GHB is metabolized rapidly. Sweating, anxiety attacks, rapid pulse, and high blood pressure are the first indications that one is experiencing GHB withdrawal. These first symptoms will decrease after 2-3 days, but if the person abused GHB in large doses for a long time, they are more likely to develop PAWS and experience different stages through the withdrawal process.

Stage two of GHB withdrawal will include hallucinations and an altered mental and emotional state, and changes in thinking and sleep will begin around day four or five. These symptoms can mimic delirium tremens, which is a condition associated with long-term alcohol abuse that includes seizures, psychosis, and uncontrollable shaking. With more severe withdrawal from GHB, studies have found that seizures occur in about 7 percent of individuals. Insomnia may be complicated by sleep deprivation due to GHB intoxication before withdrawal. As this stage subsides, cravings, mood changes, exhaustion, and anxiety may linger for a few days more.

Rhabdomyolysis is associated with about 7 percent of people withdrawing from GHB abuse, especially when the drug was abused as a dietary supplement. This condition begins with the breakdown of skeletal muscles, which releases toxins into the bloodstream. These toxins will make their way to the kidneys, causing kidney failure. At its worst, rhabdomyolysis leads to death. When the person survives, however, they will be physically weaker due to muscle loss.

Although rare, some people have reported persistent, chronic health effects from GHB abuse. These can include:

While there is still a lot of disagreement in the medical community about specific protocols to treat GHB withdrawal, many detox facilities will offer closely monitored, small doses of benzodiazepine drugs – especially long-acting Valium – to ease the initial symptoms of withdrawal if a physician determines the individual is at risk of developing PAWS. Avoiding prolonged withdrawal and easing the GABA receptors off this sedative-hypnotic drug will improve the person’s mood and physical experience, which reduces the risk of relapse early in treatment.

Some medical detox specialists may also use small doses of barbiturates, anticonvulsant medications, or antipsychotic medications to treat specific symptoms like sleeplessness, seizures, and hallucinations. It is important to reduce psychological and physical distress as much as possible, so the person can safely detox and enter an evidence-based rehabilitation program. Both inpatient and outpatient rehabilitation programs focus on changing behaviors around drugs like GHB, which further reduces the risk of relapse, overdose, and later addiction.

club drugsghbsedativeswithdrawal
Help is a Phone Call Away
Please don't suffer with substance abuse thinking no one cares. We care and want to help you get back to the life you deserve.
Get the Info & Help You NeedWe're open across the US. Learn about your options.