Nitrous Oxide: Can You Overdose? How Much Is Lethal?

Nitrous oxide (N2O, which is commonly referred to as laughing gas) was discovered in the late 1700s and has been used medicinally for many years. It is a small inorganic chemical that has numerous uses in addition to its medicinal uses. It is often used in the food processing industry, the semiconductor industry, and even for car racing. Nitrous oxide is also considered to be a pollutant, as it is a byproduct of combustion.

Nitrous oxide is also abused by individuals who inhale the fumes through various sources, including through various food dispensing agents like commercial whipped cream dispensers (called “whippets”) and other similar containers. Replacement nitrous oxide containers for these commercial grade items are readily available and not illegal to own. In addition, nitrous oxide is contained in many over-the-counter products that can readily be purchased at a local store, such as vegetable spray, cooking sprays, etc. 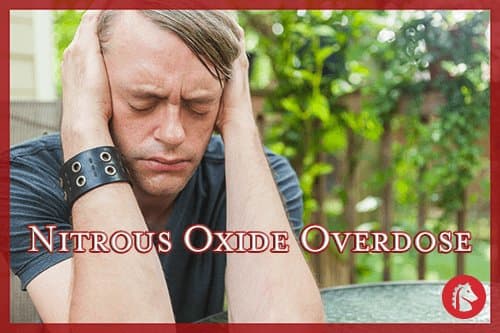 How Long Does Laughing Gas Last?

Because it is a gas, nitrous oxide is primarily absorbed through the lungs. Laughing gas has an extremely fast half-life of approximately five minutes, and it is primarily eliminated through breathing.

Due to the substance’s extremely short half-life, the psychoactive effects are relatively brief, intense, and often lead to individuals bingeing repeatedly on the gas to maintain the effects. The use of nitrous oxide is not believed to cause physical dependence, but it may result in emotional or psychological feelings of dependence, such that individuals may feel the need to use it to cope with stress, feelings of anxiety, or everyday issues they face.

What Are Signs of Nitrous Oxide Overdose?

Signs of toxic exposure, including overdose, include

Again, this is a gas, so there are no recommended or specified doses associated with toxicity or overdose. The World Health Organization (WHO) has set standards for the safe amount of nitrous oxide that should be considered in both chronic and acute exposures (acute exposure being for the use of medicinal reasons and not designed to specify exposures associated with recreational abuse of the substance).

Individuals who abuse laughing gas by inhaling containers of it easily exceed this safe ratio and can experience toxic and overdose effects after several minutes of continued exposure; however, because of the drug’s short half-life, overexposure to nitrous oxide would expected to significantly dissipate once the person stops breathing in the substance and breathes air. Continuing to inhale the substance for more than several minutes can result in significant toxic issues. Chronically abusing nitrous oxide (continuing to inhale it on a regular basis) can lead to serious chronic issues that could present as toxic exposure.

Death could conceivably occur in individuals who experience significant brain damage as a result of the lack of oxygen to the brain if they inhale very concentrated amounts of nitrous oxide and do not breathe sufficient amounts of oxygen.

What Are The Medical Uses of Nitrous Oxide?

The gas is considered to be relatively safe with only a few contraindications:

Nitrous oxide abuse is a significant issue. As mentioned above, it can be found rather easily, and there is no specific age limit for purchasing containers of nitrous oxide that are often referred to as whippets, cream chargers, etc. Moreover, individuals can buy cans of products that contain nitrous oxide, such as whipped cream, in a grocery store and inhale the gas.

What Are Some Bad Reactions To Nitrous Oxide?

What Are Long-Term Nitrous Oxide Side Effects?

Certain individuals who work in occupations where nitrous oxide may be more commonly inhaled, such as welders, firefighters, military personnel, etc., are at risk for issues associated with long-term exposure as are chronic abusers of the substance. Nitrous oxide may also be a byproduct of organic material, such as corn and other grains. If these are stored in silos and ferment, farmers may be at risk for chronic exposure.

A review of the available case studies in a research article in the American Journal on Addictions reported in 2016 indicated the following:

The authors concluded that due to difficulty medically recognizing toxicity associated with nitrous oxide abuse, this represents a significant issue. Clinicians should become familiar with the symptoms in order to be able to recognize them.

Don’t let the devastating side effects of addiction go on for another day. If you or someone you love is struggling with addiction and are ready to start the treatment process, call us today at . Oxford Treatment Center, American Addiction Centers’ Mississippi rehab, is ready to help you get the treatment you need today.

overdoseprescription
Prefer getting help via text?
We're available 24/7 via text message. Signup below for access to our team when its convenient for you!
and many more...
✕
Instantly Check Your Insurance Coverage
Your information is safe & secure
At Oxford, we accept most types of private (non-government) insurance and offer a variety of payment options.
You can quickly and privately check your insurance benefits to see if you're covered for addiction treatment services. We’ll be able to tell you if your provider is in network with Oxford Treatment Center and all American Addiction Centers locations.
This means your treatment may be FREE1 depending on your policy, copay, and deductible.
Your Next StepsFind help & resources or learn more about Oxford.