Working Out On Adderall: Is It Safe?

Adderall is a combination of dextroamphetamine and amphetamine that is typically prescribed for individuals who have the psychiatric disorder attention deficit hyperactivity disorder (ADHD). Adderall comes in an immediate-release form and an extended-release form.

The substance is a controlled substance that is classified by the United States Drug Enforcement Administration (DEA) in the Schedule II category. Drugs classified in this category are considered to have important medical uses, but also considered to be potential drugs of abuse that have a very high risk for the development of physical or psychological dependence. Adderall can only legally be obtained with a prescription from a physician.

Adderall is a central nervous system stimulant, meaning that it increases the functioning of the neurons of the brain and spinal cord and in the peripheral nervous system. It has the effect of helping people with ADHD maintain their attention, be less distractible, and control issues with impulsivity and hyperactivity.

People without the disorder who use the drug in small doses may find they have increased abilities to pay attention and increased energy, but they may also experience jitteriness, hyperactivity, and other symptoms as a result of the stimulant properties of the drug. Medicinal doses of the drug are very similar to taking relatively large amounts of caffeine. Doses taken by individuals who abuse the drug are significantly higher and can have significant deleterious effects that can range from high blood pressure, irregular heartbeat, headache, and nausea, to experiencing full-blown psychosis and a paranoid state.

Is Working Out On Adderall Safe? 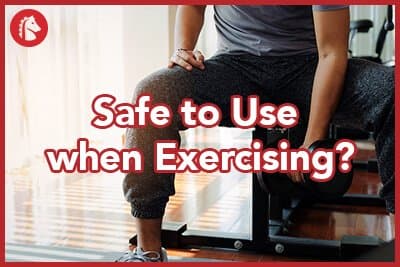 There is quite a bit of information on the internet regarding the use of stimulants to promote or boost performance during exercise. In fact, professional athletes often use stimulants when they work out, and there are numerous stories regarding the use of very strong and illegal stimulants like amphetamines by some well-known athletes to improve their performance. In addition, a recent article discussed the pros and cons of the “Adderall Workout.”

It should be noted that the effects of any stimulant, including Adderall, on physical performance is dose-dependent, such that small amounts of the drug may help to increase energy levels and performance, whereas larger amounts of the drug become detrimental. In addition, the potential for many of the side effects associated with the drug increases with large doses. Individuals who are prescribed the drug for ADHD should check with their physician regarding exercising while on it.

Side Effects Of Adderall and Working Out:

Some of the side effects of Adderall and working out include:

Little information is available about the effects of combining Adderall with other substances that individuals may use during workouts, such as herbal substances. Individuals who combine Adderall with other stimulants will be risking the enhancement of the above effects and placing themselves at an increased risk for cardiovascular issues, fainting, dizziness, poor judgment, and even psychosis.

Long-term use of the drug may result in the development of tolerance, which can result in a person taking more and more of the drug to get its stimulating effects. This can increase the risk of the untoward side effects associated with the drug and the potential for other serious issues.

Moreover, using the drug in high doses may result in extended issues with nervousness, hyperactivity, an inability to concentrate, and other issues that may lead to the person using other substances to “come down” from the stimulating effects of the drug. Combining substances that have different effects can increase the potential for dangerous interactions.

Even though individuals report using Adderall as a stimulant to increase the effectiveness of their workouts, the practice of working out on Adderall cannot be considered safe. Continued nonmedical use of Adderall can very easily become a full-blown stimulant use disorder that affects numerous aspects of a person’s functioning.

Adderall should only be used for its prescribed purposes and/or under the supervision of a physician. Unsupervised or illicit use of a controlled substance to enhance workouts, lose weight, and/or increase energy levels is not a safe practice.

If you having been using Adderall without a prescription and would like to stop doing so, give us a call at . Our Admissions Navigators are standing by day or night to provide you with more information about what potential recovery could look like. Oxford Treatment Center, American Addiction Centers’ Mississippi inpatient drug rehab center, is ready to help you get the treatment you need today.

adderallprescriptionstudy drugs
Prefer getting help via text?
We're available 24/7 via text message. Signup below for access to our team when its convenient for you!
and many more...
Your Next StepsFind help & resources or learn more about Oxford.