Adderall Tolerance: Can You Decrease It?

Adderall is a stimulant medication that is prescribed to treat attention deficit hyperactivity disorder (ADHD) and sometimes used to treat daytime sleepiness associated with narcolepsy. The drug combines dextroamphetamine and amphetamine, which helps those with ADHD stay focused on tasks and control their movements or attention.

While Adderall has been a prescription medicine since 1960, the drug became popular in the 1990s alongside Ritalin as the medical understanding of ADHD improved and more children and adolescents received timely diagnoses. The wider prescription of ADHD medications like Adderall led to wider diversion of these drugs, usually when children with ADHD gave their medication to their friends. This led to the rise of “study drugs,” or stimulants that were abused to cram for tests or stay up all night writing papers. Many people who abused Adderall for these reasons as adolescents have not stopped abusing the drugs; they continue abusing stimulants to work longer hours and complete tough projects in a competitive workplace.

Whether one takes Adderall as prescribed or abuses the drug for nonmedical reasons, it is possible to develop an Adderall tolerance. Treating tolerance to a prescription medication will differ, depending on whether the drug is medically necessary or being abused for illicit reasons.

How Does An Adderall Tolerance Build Up? 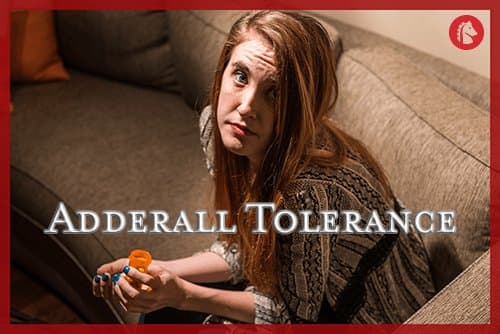 The National Institute on Drug Abuse (NIDA) defines tolerance to a drug as a biological process in which one’s body gets used to the presence of a drug and does not respond to it the same way. Over time, any drug’s effects will diminish with frequent, consistent dosing, whether this is through a prescription or because of addiction. As the original effects fade, the person may be tempted to take more of the substance to achieve the prior sensations. This is especially risky among those who misuse or abuse potent drugs, including Adderall or other prescription stimulants, because they do not have medical oversight. They may overdose, or they may experience addiction to the substance as they take more and more of it.

People who take Adderall because it has been prescribed should seek advice from their physician, which could involve slowly increasing the dose or moving to a different medicine. A prescribing physician will always get their patient the minimum effective dose of Adderall, since it is a strong drug; however, this dose is not dependent on age, body weight, or gender, and it can change over time, including as the person develops an Adderall tolerance.

People who are not tolerant to Adderall, but are taking too much, as well as those who abuse Adderall for nonmedical reasons, may experience these side effects:

Regardless of the physician’s approach, Adderall tolerance is a normal part of taking this drug for several years to manage a lifelong condition like ADHD. It is not a sign of addiction in those who have a legitimate use for the substance, and doctors understand this. Warnings from the Food and Drug Administration (FDA) on the drug’s labels clearly state that doctors should re-evaluate their patients’ dose of Adderall over time to ensure they receive the best, therapeutic benefit.

However, people who abuse Adderall to get high or to enhance their performance, and who do not have ADHD or narcolepsy, put themselves at risk, not just for becoming tolerant to or dependent on Adderall, but also for experiencing an overdose, addiction, or chronic health problems from abusing it for a long time.

How Long Does Adderall Last?

Each dose of Adderall Immediate Release (IR) lasts between four and six hours, and many people may move to taking the drug twice per day, or they may increase their dose after several years because the original dose does not manage the symptoms of ADHD. They may switch to Adderall XR (Extended Release) because that drug lasts 12 hours. The largest recommended daily dose of Adderall, according to the Physicians Desk Reference 2011, is 40 mg for ADHD and 60 mg for narcolepsy.

If one has developed an Adderall tolerance at a high dose, their doctor may recommend detoxing and switching to a different stimulant medication. This is because the individual’s body may not respond to any combination of amphetamine, and they may need different stimulants like those that make up Ritalin or Concerta.

What Are The Risks Of Abusing Adderall?

People who abuse Adderall and develop a tolerance to it will often rapidly increase how much they take. This puts them at risk of an overdose. If someone overdoses on Adderall or another stimulant, call 911 immediately.

Signs of an Adderall overdose include:

How To Stop Adderall Abuse?

Physicians are not likely to reduce the dose of Adderall for a person with ADHD because their body has already developed a tolerance to the stimulant, and the person needs consistent medical treatment to manage their condition. Always follow the prescribing physician’s instructions regarding any prescription drug, including Adderall, and let them know if the substance is no longer effective at its current dose.

People who struggle with Adderall abuse need help from addiction specialists. Safely detoxing from the drug may involve tapering the dose down over time because the individual does not have ADHD or narcolepsy as an underlying condition that requires stimulant treatment. While they may experience withdrawal symptoms, their mental and behavioral health will improve with detox and evidence-based rehabilitation. Entering a rehab program is the second step to ending Adderall addiction, and it will help change behaviors related to stimulant drugs.

adderallprescriptionstudy drugs
Ready to get started?
We're available 24/7 to answer questions and help you make decisions about starting recovery from drug use.
Your Next StepsTake control of your