Adderall Neurotoxicity: How Dangerous Is It?

Written by: Editorial Staff
Last updated on May 4, 2020

Adderall is a mixture of the stimulant drugs amphetamine and dextroamphetamine. It is a prescription medication dispensed to treat attention deficit hyperactivity disorder (ADHD). The FDA issues a black box warning on the drug’s labeling that tells consumers of its high potential for abuse and associated risks of drug dependence, cardiovascular complications, and even death from misuse.

As a stimulant drug, Adderall is effective in honing focus and attention levels in those suffering from ADHD. It also promotes wakefulness and decreases appetite.

What is Adderall Neurotoxicity? 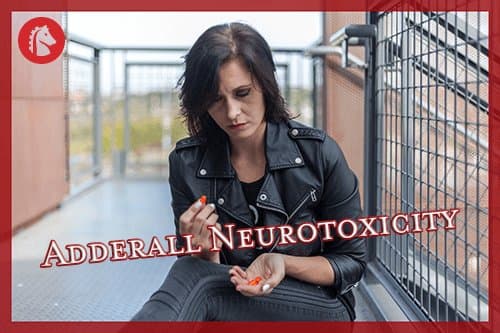 Abuse of Adderall can be highly dangerous, as the drug can have neurotoxic effects. Adderall neurotoxicity is damage to the nervous system, and in the case of Adderall, it refers to neuron and nerve damage caused by high levels of dopamine.

Adderall works by increasing levels of dopamine, serotonin, and norepinephrine in the brain. Dopamine is one of the brain’s chemical messengers, or neurotransmitters, that sends signals throughout the central nervous system, helping to regulate moods, movement, thinking, learning, and memory functions.

Dopamine is directly related to feelings of happiness. For instance, when a person eats something they like, dopamine is released, telling the brain to feel pleasure. This forms a reward pathway. Normally, dopamine is reabsorbed back into receptors in the brain and released again when something pleasurable stimulates that release. Adderall floods the brain with dopamine and prevents it from being reabsorbed quickly.

In high amounts, the drug can be considered neurotoxic, as the dopaminergic system is damaged by the drug’s disruption. The journal Molecular Psychiatry warns that prolonged exposure of the brain to the amphetamine contained in Adderall can have neurotoxic effects. This may occur because high levels of dopamine can cause the brain to actually strip itself of dopamine receptors in an effort to “balance” itself.

When levels of dopamine drop after the drug wears off and is no longer active in the bloodstream, less dopamine can be produced and reabsorbed naturally. This can make it difficult for a person to then feel happiness without Adderall. Fatigue, appetite changes, trouble sleeping, depression, anxiety, panic attacks, irritability, agitation, tremors, trouble concentrating and thinking straight, memory lapses, disruption of motor control, stomach upset, and lethargy are all possible side effects of an Adderall comedown when the drug processes out of the body.

The journal Biogenic Amines reports that amphetamine exposure can also increase the risk for stroke, causing high blood pressure and body temperature. Psychosis, including hallucinations and paranoia, is an additional potential hazard of Adderall abuse as is an elevated risk for aggressive, hostile, and even violent behaviors.

Consequences of Long-Term Adderall Use

Adderall is believed to have neurotoxic effects in doses that are higher than the recommended therapeutic dose, so these side effects are mainly related to abuse of the drug; however, it may also potentially be neurotoxic in prolonged regular doses over a long period of time.

Regular use of Adderall, even with a prescription and a legitimate medical need for the drug, can cause a person to become dependent on it. Physical dependence occurs when the brain is used to the way the drug interacts with the central nervous system and the way it influences its chemical makeup. Natural levels of norepinephrine, a form of adrenaline, as well as mood-regulating neurotransmitters serotonin and dopamine are disrupted by the presence of Adderall.

Over time, the brain can come to expect the drug to regulate the levels of these chemical messengers and is no longer be able to keep up normal production, transmission, and reabsorption of them on its own. As a result, withdrawal symptoms and intense cravings can ensue, which may lead to addiction.

Addiction is a chronic and relapsing brain disease characterized by an inability to control drug use. A person battling addiction may no longer be able to stop using the drug on their own even if they want to. Social isolation, financial difficulties, mood swings, and troubles at work, school, and home are all possible ramifications of Adderall addiction.

Adderall is a drug that is not recommended to stop taking suddenly or “cold turkey,” as the withdrawal symptoms can be emotionally difficult.

Long-term damage from meth abuse can include an increased risk for Parkinson’s disease (a movement disorder), trouble with verbal learning, memory issues, and other cognitive deficits. Combining Adderall with other drugs can increase the number of possible consequences and dangers associated with both substances as well. For instance, mixing Adderall with other medications that impact serotonin levels, such as MOAIs, SSRIs, and SNRIs, can lead to the potentially life-threatening serotonin syndrome, which can cause psychosis, irregular heart rate and blood pressure, dizziness, hyperthermia, muscle rigidity, nausea, vomiting, diarrhea, coma, and seizures.

Additional side effects of Adderall neurotoxicity use include:

When Adderall dependence or addiction is a concern, a medical detox program is the ideal method for stopping the drug and allowing it to process safely out of the body. Trained professionals may set up a tapering, or weaning, schedule to slowly lower the dosage over a set period of time instead of stopping the drug suddenly. This can help to ease some of the potential withdrawal symptoms. Additional symptoms of withdrawal can be controlled with medications, such as mood stabilizers and sleep aids, during detox.

It can take the brain some time to recover from the effects of Adderall neurotoxicity and for levels of dopamine to return to normal without the drug. A comprehensive drug addiction treatment program that includes behavioral therapy, relapse prevention programs, and recovery support can help. For more information about Adderall addiction and the methods used to treat it, give us a call at .

Adderall Use In College Students

Between 2008 and 2013, abuse of amphetamine drugs such as Adderall nearly doubled. Adderall may be commonly abused as a “study drug” on college campuses, being used in an effort to get and stay ahead with schoolwork and classmates. The Monitoring the Future (MTF) Survey of 2013 published by the National Institute on Drug Abuse (NIDA) reports that nearly 11 percent of college students reported Adderall abuse. The New York Times publishes that prescription stimulants are some of the most commonly misused substances on college campuses.

According to the 2016 National Survey on Drug Use and Health (NSDUH), there were over 1.5 million people abusing stimulant drugs. Per a study published by John’s Hopkins University, between 2006 and 2011, nonmedical use of Adderall increased 67 percent for individuals between the ages of 18 and 25, and emergency department (ED) visits related to the drug’s misuse spiked 156 percent during that same time period.

adderallprescriptionstudy drugs
Ready to get started?
We're available 24/7 to answer questions and help you make decisions about starting recovery from drug use.
Are you covered for addiction treatment? Find your insurance.
and many more...
✕
Instantly Check Your Insurance Coverage
Your information is safe & secure
At Oxford, we accept most types of private (non-government) insurance and offer a variety of payment options.
You can quickly and privately check your insurance benefits to see if you're covered for addiction treatment services. We’ll be able to tell you if your provider is in network with Oxford Treatment Center and all American Addiction Centers locations.
This means your treatment may be FREE1 depending on your policy, copay, and deductible.
Your Next StepsTake control of your