What Are the Signs of Rivaroxaban (Xarelto) Abuse?

According to the 2016 National Survey on Drug Use and Abuse (NSDUH), just over 6 million Americans abused a prescription psychotherapeutic medication in the month prior to the survey. Xarelto (generic: rivaroxaban) is a prescription blood thinner, or anticoagulant, medication.

Rivaroxaban may be misused by taking it in higher doses than prescribed, taking it for longer than prescribed, using the drug in between doses, or any use of rivaroxaban without a necessary and legitimate prescription. If a person chews the tablets or crushes them to snort the powder, this is also a form of abuse.

Xarelto is a potentially dangerous medication with a risk for irreversible internal bleeding and hemorrhaging, the journal Medicine reports. It can also cause permanent paralysis.

The Institute for Safe Medication Practices (ISMP) placed anticoagulant medications, including rivaroxaban, in the category of “highest priority drug safety problems” according to the Quarterwatch Reports. Abuse of this drug raises the odds for a life-threatening complication and increases the risk for addiction. 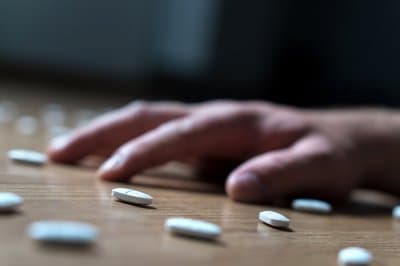 Rivaroxaban use comes with several common physical side effects, such as cough, respiratory infection, headache, dizziness, lightheadedness, fatigue, nausea, nosebleeds, chest pain, and pain in the extremities, the U.S. National Library of Medicine (NLM) PubMed Health publishes. Signs of the most concerning possible side effect of Xarelto, internal bleeding, include pale skin, easy bruising, bloody stool, dizziness, abdomen swelling, and fatigue. These signs should be considered an immediate medical emergency.
All of these physical side effects of rivaroxaban can occur from regular use as well as from misuse or abuse. Additional signs that a person may be abusing Xarelto can include:

Addiction is a disease wherein a person can no longer control their drug use. The National Institute on Drug Abuse (NIDA) publishes that if a person displays two of the following physical and psychological signs as indicated by the most current Diagnostic and Statistical Manual of Mental Disorders (DSM-5), then addiction can be diagnosed:

Xarelto use can become abuse even if the drug was initially prescribed for a medical reason. A person may misuse the drug and then keep doing so, eventually leading to a loss of control over use, and therefore addiction.

The Journal of the American Heart Association (JAHA) publishes information showing that most people who are prescribed Xarelto are over the age of 65, an age demographic that is especially vulnerable to prescription drug abuse and addiction. Both of these issues are often overlooked in this population.

Elderly individuals have slower metabolisms, meaning that the drug can stay active in the bloodstream for longer and have greater impact. Social and circumstantial isolation is common in the older population as well, as loved ones move away, friends and family members pass away, and living situations change.

The National Council on Alcoholism and Drug Dependence (NCADD) reports that around 2.5 million senior citizens in the United States battle addiction. Drug abuse and addiction are often misdiagnosed or simply missed in an older adult, both by medical professionals and by loved ones. Symptoms may mimic that of another disorder, and older adults typically take multiple prescriptions at a time so it can be harder to realize when drugs are being misused.

Abuse of Xarelto can have life-threatening complications, including some irreversible side effects. It is important to be able to recognize potential misuse of this medication. Xarelto is not a drug that should be stopped suddenly, as it can have dangerous and even potentially fatal withdrawal symptoms. Instead, use of a medical detox program followed by a complete addiction treatment program is optimal to achieve lasting recovery.

substance abuse symptoms
Ready to get started?
We're available 24/7 to answer questions and help you make decisions about starting recovery from drug use.
Are you covered for addiction treatment? Find your insurance.
and many more...
✕
Instantly Check Your Insurance Coverage
Your information is safe & secure
At Oxford, we accept most types of private (non-government) insurance and offer a variety of payment options.
You can quickly and privately check your insurance benefits to see if you're covered for addiction treatment services. We’ll be able to tell you if your provider is in network with Oxford Treatment Center and all American Addiction Centers locations.
This means your treatment may be FREE1 depending on your policy, copay, and deductible.
Your Next StepsTake control of your