What Is the Difference between Codeine and Percocet? 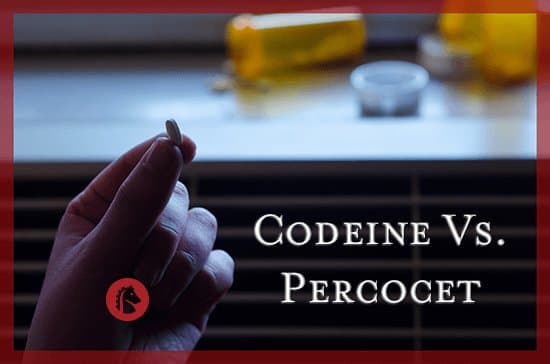 The current opioid epidemic in the United States has led to the overdose deaths of nearly a half million individuals between 2000 and 2015. While many of these overdoses are caused by high doses of OxyContin, heroin, fentanyl, and other, more dangerous illicit opioids, the drugs that began the epidemic are less potent. Codeine, hydrocodone, and oxycodone prescription medications are still among the most abused substances, leading to abuse and addiction. Those who begin abusing these drugs too often turn to heroin when they can no longer get prescription refills or afford prescriptions.

Two short-term, low-dose opioids – codeine and Percocet – are still frequently prescribed, although they are more tightly regulated. While they are both prescription opioid drugs, they have some distinct differences.

Have you lost control of your Percocet or codeine use? Answer a few brief questions to find out if you need help. Complete our free and confidential addiction questionnaire today.

The clearest difference between Percocet and codeine is their chemical formula; they are different opioids. Percocet is a brand name for a combination of oxycodone and acetaminophen, a nonsteroidal anti-inflammatory drug (NSAID), while codeine is a less potent narcotic painkiller that is used more often in prescription cough medicine because it suppresses the urge to cough. Codeine is a generic drug that is found in several brand name medications.

Percocet is tightly regulated and only sold when prescribed by a physician because the oxycodone in the medication is a Schedule II narcotic, per the Drug Enforcement Administration (DEA). Although codeine is also tightly controlled through drug scheduling, it is Schedule III, making it easier to acquire. Certain doses of codeine are Schedule V, which is the least regulated category; because of this, some states still allow the sale of codeine products in very lose doses over the counter. This is very uncommon, however, as most effective doses of codeine for pain or illness are high enough to be Schedule III.

Additionally, as a combination painkiller, Percocet contains acetaminophen while codeine is a low-dose opioid. The acetaminophen in Percocet puts a person struggling with opioid abuse at risk for liver failure.

Codeine is less expensive, mostly because it is a generic drug. Percocet costs more, but it is a more potent brand-name drug.

Similarities between Codeine and Percocet

While there are subtle differences in how codeine and Percocet are prescribed to treat pain or illness, the drugs have a lot in common. The oxycodone in Percocet is an opioid, just like codeine, so they both have a high risk for intoxication and addiction.

Both drugs interact with the opioid receptors in the brain, reducing the sensation of pain for a few hours while also releasing neurotransmitters like serotonin and dopamine to improve mood. At higher doses, this can cause intoxication, and the relaxing, pleasurable sensation can become addictive.

Both drugs also interact with breathing rate. For codeine, this leads to cough suppression, but at higher doses, both codeine and oxycodone can suppress breathing, leading to oxygen deprivation. An overdose on any opioid, including oxycodone or codeine, can cause breathing to stop, leading to death.

Opioids Can Lead to Addiction

Based on potency of the opioid, Percocet puts most people at a higher risk for addiction, abuse, and overdose compared to codeine. However, codeine is easier to access because it is less restricted, meaning it can be acquired for diversion more easily.

Abusing either drug is very dangerous and can lead to long-term health problems, abuse of more potent opioids like heroin, and death. It is important to get help.

Don’t let the devastating side effects of addiction go on for another day. If you or someone you love is struggling with addiction and are ready to start the treatment process, call us today at . Oxford Treatment Center, American Addiction Centers’ drug detox clinic in Mississippi, is ready to help you get the treatment you need today.

Prefer getting help via text?
We're available 24/7 via text message. Signup below for access to our team when its convenient for you!
and many more...
Your Next StepsFind help & resources or learn more about Oxford.