Suboxone for Depression: Can It Help You?

Clinical depression is one of the most widespread mental health conditions in the world today. In America alone, it is the leading cause of disability among adults, affecting 6.7 percent of the general population. Many treatments have surfaced as potential aids in helping people manage their symptoms, and one of the more surprising ideas has been Suboxone. 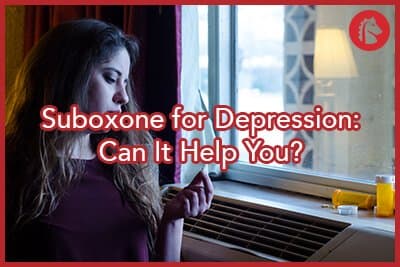 Suboxone is the name given to a combination of two different drugs: naloxone and buprenorphine. Buprenorphine is a partial opioid agonist, which means that it gives very small doses of opioids to users; this is useful for people who are addicted to stronger opioids, like heroin or fentanyl (which, by contrast, are full opioid agonists). Both buprenorphine and full agonists work by activating the opioid receptors in the brain and central nervous system, leading to feelings of peacefulness and reduced pain. While heroin or fentanyl completely overwhelms the receptors, buprenorphine has “low intrinsic activity,” because it only partially activates the receptors (hence, “partial opioid agonist”). Even though patients feel a mild narcotic stimulation from buprenorphine, it is significantly less addictive and habit-forming than what they would receive from a full opioid agonist. Buprenorphine therapy gives people a way to gradually move away from their pre-existing opioid habit while simultaneously minimizing the severity of the inevitable opioid withdrawal symptoms.

What Does the Naloxone in Suboxone Do?

Naloxone is the other drug in Suboxone. As a pure opioid antagonist, naloxone shuts down opioid receptors instead of activating them, as agonists do. Naloxone not only prevents agonists from reaching the opioid receptors, it can even reverse the effect of opioid agonists that are already in the person’s system, by cutting off the signals that the activated receptors would send to the central nervous system.

Giving raw naloxone to an opioid-addicted individual is too risky, because the administration can induce immediate and dangerous withdrawal effects, more so than if the person were to experience opioid withdrawal by simply not taking opioids. For this reason, naloxone is bundled with buprenorphine to give users an easier process of moving away from stronger (full agonist) opioids, and this is how we have Suboxone.

As an opioid treatment, Suboxone works very well. Its first clinical study found that it “substantially improved” the outcomes of 154 people aged 15-21, who were addicted to opioids for at least 1.5 years, located across the United States. Researchers noted that Suboxone not only reduced the consumption of opioids, it was also associated with a decline in other forms of drug use. Additionally, Suboxone therapy led to patients retaining the concepts of their therapy and rehabilitation better compared to the group that received therapy without Suboxone.

The clinical study was conducted in 2008, and four years later, there were 9.3 million prescriptions for Suboxone filed in the US.

Suboxone has helped save many lives in the fight against opioid abuse in the United States, but it is a Schedule III drug in the country. While there is a legitimate medical application for its use, there is a risk of moderate to low physical dependence or high psychological dependence. This classification means that Suboxone cannot be purchased without a prescription, and unauthorized ownership or distribution of Suboxone is punishable by jail time and fines in the thousands of dollars.

Because of the risk of psychological dependence, the Food and Drug Administration has not approved Suboxone for the treatment of depression. Mental Health Daily notes that for a patient to be prescribed Suboxone for this reason, the person would need to have a comorbid opioid addiction (that is, diagnosed clinical depression and diagnosed opioid addiction), or a psychiatrist would have to prove that no other form of depression therapy has worked. When it comes down to it, “Suboxone is a highly unorthodox option” for treating depression.

That is not to say that the idea of using Suboxone for depression has never been debated. In the mid-1990s, researchers at Harvard Medical School carried out a clinical trial and found that patients who had nonpsychotic major depressive disorder that did not respond to standard therapies (antidepressants or electroconvulsive) were “successfully treated” for their symptoms with Suboxone. Writing in the Journal of Clinical Psychopharmacology, the Harvard scientists concluded that there was a “possible role for buprenorphine in treating refractory depression.”
Concerned about treatment costs? Call now for FREE insurance and payment consultation.
Call Now(888) 496-8382 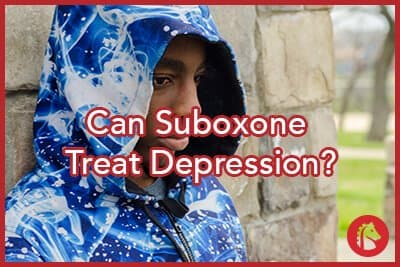 Notwithstanding the FDA’s refusal to permit Suboxone as a treatment for depression, more and more doctors are acknowledging the antidepressant effects the drug has on patients, especially in cases where patients do not respond to traditional therapies. In some doctors’ opinions, the risk of developing a Suboxone dependence is a better alternative than living with the symptoms of a depressive disorder so strong that the usual therapies are ineffective.
Past research has demonstrated that physical and mental pain alike are controlled by the same chemical systems in the brain, to the point where generalized pain is a symptom of depression. New medications have been formulated in an attempt to address both forms of distress associated with depression, but Mental Health Daily notes that Suboxone already does this.

As a partial opioid agonist, Suboxone works on the particular opioid receptor that releases serotonin (a neurotransmitter that regulates mood, social behavior, sleep, appetite, and sexual desire) and dopamine (a neurotransmitter that regulates everything from movement, memory, pleasure, and anticipating rewards, to mood and processing pain) in the central nervous system. Because of this, some doctors and scientists have suggested that Suboxone can, in theory, be used as an antidepressant.

This application of Suboxone would have to depend on a number of other factors being met. First, it would have to be proven that no other drug classes (selective serotonin reuptake inhibitors, tricyclic antidepressants, monoamine oxidase inhibitors) were effective; that even drastic treatments like electroconvulsive therapy and adjunctive treatments like lithium, Adderall, and talk therapy were ineffective; and that the patient still suffered from major depressive disorder.

Second, the patient would have to demonstrate that the symptoms of the depression were severe enough to mandate a last-resort therapy like Suboxone. Depression symptoms are severe enough on their own, but diagnosable suicidal ideation and behavior, substance abuse or psychosis, and hallucinations would raise enough red flags to make a strong case for Suboxone therapy.

Thirdly, patients would likely have to have a coexisting opioid addiction. Suboxone’s effectiveness in managing opioid withdrawal and dependence is already well documented, as is the depression that many patients feel as their brains struggle to function without the influence of full opioid agonists. In theory, a patient who is experiencing clinical depression (either as a cause of opioid abuse or an effect thereof) would benefit from Suboxone helping to ease the transition off opioid dependence, and mitigate the precipitating and ensuing depression.

Nonetheless, Suboxone’s potency has kept it off-limits as a drug for depression, even garnering some controversy for its use in managing opioid use disorder. Skeptics question whether giving opioid-based medications to people already struggling with an addiction to opioids really helps. “Addicted to a treatment to addiction,” in the words of an op-ed piece The New York Times.

The Benefits of Suboxone for Depression

What are the benefits of using Suboxone for depression? As a partial opioid agonist, buprenorphine does cause a quick improvement of mood in patients. Additionally, people who have taken Suboxone for their opioid dependence have noted that hobbies and activities become more pleasurable, which will be a relief for sufferers from depression who struggle with a loss of interest in the things they once enjoyed doing.

The American Academy of Family Physicians notes that patients on Suboxone therapy report a feeling of normality that they struggled to find when dealing with their opioid abuse. As depression patients try to cope with serotonin or dopamine deficiencies, the boost from Suboxone can help them regain that sense of normality.

Since Suboxone acts on the receptor in the brain that plays a role in regulating anxiety and relaxation, the presence of the buprenorphine can help patients who struggle with both major depression and anxiety disorder. The conditions being what they are (“You can’t make yourself calm down” with anxiety disorder, says a writer on Life Hacker.), a partial opioid agonist might help patients relax.

The other side of that coin is that patients on Suboxone experience an increase in their wellbeing. Buprenorphine therapy provides a path away from dependence on full opioid agonists, allowing patients to experience and enjoy life events on their own terms. This is well documented in addiction treatment, and it can theoretically provide the same benefit to those struggling with depressive disorder.

Risks of Suboxone for Depression Treatment 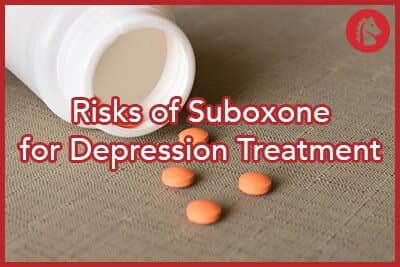 However, there are a number of factors to keep in mind when it comes to the idea of using Suboxone for the treatment of clinical depression. The primary among them is that Suboxone is still a powerful drug, one that is designed to be moderately addictive (in contrast to the extremely addictive drugs for which it is prescribed as a countermeasure), and for people suffering from depression, the feeling of tranquility and peacefulness can be dangerously attractive.

Additionally, every drug and medication has its own side effects and differences in how it reacts from one person to the next. There is no way to predict the power and effectiveness of a Suboxone or its long-term effects in a person who might or might not have an opioid use disorder.

Lastly, care must be taken when a patient with major depressive disorder goes without Suboxone for a while, so the withdrawal process itself is carefully monitored. The psychological effects of opioid withdrawal can be strong enough to increase the feelings of depression and compel a deeper craving for the buprenorphine, notwithstanding the opioid antagonist naloxone being part of the medication.

For some patients, Suboxone may work too well. The medication is designed to not be as addictive as full opioid agonists, but for patients whose brains cannot produce healthy levels of dopamine or serotonin, even the partial activation of opioid receptors can lead to the narcotic euphoria that is part of opioid consumption. Experiencing this should be a warning flag on its own, but for those who struggle with major depressive disorder, this kind of euphoria can be hard to decline.

Similarly, people taking Suboxone foropioid use disordershould not feel the “high” that comes with opioid abuse, because their opioid receptors are used to being fully activated. For patients who do not use opioids, partially activated opioid receptors can still give them a high that, when contrasted to their depression, can be a source of psychological dependence. Suboxone addiction is a real problem for many people trying to quit their use of other opioids, which is why it is a controversial therapy for some in its own right. For people for whom this would be their first exposure to an opioid, it raises the possibility of compelling unhealthy use.

Using Suboxone for depression treatment is a complicated question that will not be answered quickly or comprehensively. However, as the reality of depression becomes more and more accepted, there might be a greater drive to try new remedies and treatments to help people control their symptoms. But as long as the Food and Drug Administration refuses to authorize Suboxone for depression, the possibility of more prescriptions remains remote.

co-occurring disordersdepressiondetoxmatopiatesuboxone
Get the Info & Help You NeedWe're open across the US. Learn about your options.