Is Clonidine Use Dangerous? Can it Be Abused?

Clonidine is a medication that can be safely used when prescribed by a doctor and taken as directed. Although there is some case report evidence that clonidine may have some abuse potential, instances of its abuse are few and far between and seem to be in conjunction with other intoxicating substances.

In this article, you’ll learn: 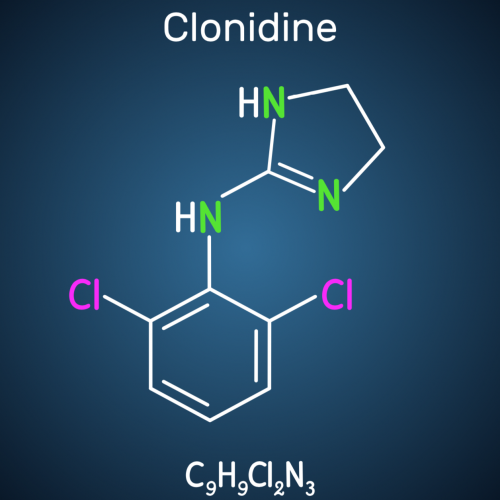 Clonidine is what’s known as a centrally acting adrenergic agonist medication. Its activity within the central nervous system has several cardiovascular effects, making it useful in the treatment of certain types of high blood pressure, but it also has a number of other medicinal uses.1,2

Catapres is available in both immediate-release and extended-release forms. Catapres and other immediate-release formulations of clonidine are typically used to treat hypertension but have also been shown to be useful for off-label purposes in helping individuals who are withdrawing from alcohol or opioid drugs. By diminishing certain sympathetic nervous system activity, clonidine helps to control some of the withdrawal symptoms associated with discontinuing these substances, and can help a person to remain abstinent in recovery. 1,2

Kapvay (extended-release clonidine) is approved as an adjunctive treatment for attention deficit hyperactivity disorder (ADHD) when used with psychostimulant medications such as Adderall, Ritalin, or Concerta. 1,2

Clonidine is also used for a number of other purposes that include: 1,2

How is Clonidine Used for Detox?

Medical professionals may use clonidine to help a patient manage certain unpleasant symptoms associated with opioid, alcohol, and nicotine cessation. Although it may not help reduce drug craving, clonidine is helpful in other ways, including:2,3

Does clonidine get you high? The short answer is no. Clonidine works by helping tamp down nervous system over-excitation, which can occur during opioid, alcohol, and nicotine withdrawal.2,3

Clonidine is not considered to be a major drug of abuse. It is an unscheduled drug, meaning that the U.S. Drug Enforcement Administration has not designated clonidine as having a significantly high potential for abuse, though there is some limited evidence to demonstrate that intentional misuse may occur in conjunction with other substances.4

It is hypothesized that some cases of clonidine abuse involve people who began using it for symptomatic management of withdrawal from other abused substances but then later continued to misuse it for its ability to synergize the intoxication associated with alcohol and certain other drugs such as benzodiazepines and opioids.4

Though the issue doesn’t appear to be widespread, in the manner described above, clonidine misuse may itself fit in with the compulsive patterns of substance behavior common to addictions. Some signs of clonidine dependency may include:4

When abused with certain substances such as benzodiazepines, opioids or alcohol, clonidine can produce dangerous effects, such as extreme lethargy, drowsiness, and weakness.1

Just like any other medication, clonidine adverse effects can occur even when the medication is taken correctly.1

Common side effects of clonidine include:1

Less common effects include allergic reactions, which may manifest as:1

Clonidine Warnings: Signs of an allergic reaction should be addressed immediately by discontinuing the medication and going to an emergency department or calling the prescribing physician if available for immediate medical guidance.1

Laura Close is a Senior Web Content Editor at American Addiction Centers and an addiction content expert for Oxford Treatment Center. She has a bachelor’s degree in English and has nearly a decade in professional editing experience that includes...Read More

Get the Info & Help You NeedWe're open across the US. Learn about your options.