How Long Does PCP Stay in Your System?

How Is PCP Used?

PCP (phencyclidine), often referred to as angel dust or fry, is a powerful dissociative hallucinogenic drug that was originated in the 1950s as an anesthetic and taken off the market in the 1960s due to a number of severe side effects associated with its use. PCP is available in powder and liquid forms, and users typically smoke it, although it may be injected or snorted as well. The intake method, however, should not have an effect on how long PCP stays in your system and body.

It is often smoked with tobacco or cannabis products, but it may also be added to other substances, such as ginger, parsley, oregano, etc., and smoked. The drug produces very powerful hallucinations, often causing users to feel like they or their surroundings are not real or as if they are leaving their body (dissociative effects).

The drug is classified by the United States Drug Enforcement Administration (DEA) as a Schedule II controlled substance, indicating that it may have some medicinal uses, but it is an extremely dangerous drug of abuse. Its use may result in physical or psychological dependence. The drug is manufactured in very small amounts, and its manufacture and distribution for research purposes are tightly controlled.

PCP has rightfully received the reputation of being a dangerous drug of abuse due to its psychoactive effects, side effect profile, and long-term effects. The psychoactive effects of the drug are dose-dependent and can range from stimulation to mild hallucinations to seizures, catatonia, and coma. Individuals who use PCP often use it in conjunction with other drugs of abuse. They may become very aggressive, violent, and feel that they are invulnerable.

How Long Can PCP Be Detected Your System? 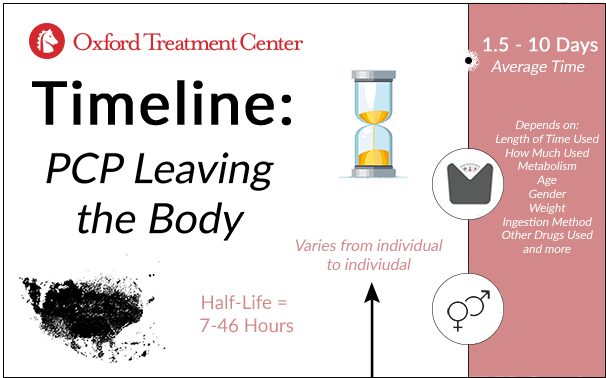 The estimated half-life of PCP is 7-46 hours. The average half-life of PCP in the system is about 21 hours. The half-life of a drug refers to the amount of time that an individual’s metabolism is able to reduce the drug by half its original concentration. This measure is often used to determine the length of time a specific drug can be estimated to remain in an individual’s system. Drugs that are fat-soluble (lipophilic) will remain in the system longer than drugs that are hydrophilic or water-soluble. PCP is lipophilic.

The elimination of the drug is accomplished over a number of routes, but the primary organ responsible for eliminating drugs is the liver. When the drug is smoked, almost half of it is destroyed by the heat; when it is injected or snorted, this is obviously not the case. If an individual uses an average amount of PCP based on the average half-life of the drug, it could take a person anywhere from approximately 1.5 days to 10 days to eliminate the drug from the system. However, some sources suggest that because PCP is fat-soluble, it may be stored in fat cells in the body, and the half-life may be considerably longer (up to 72 hours for most individuals). In this scenario, it would take an individual about 17 days to eliminate PCP from their system.

The half-life of the drug will vary somewhat from individual to individual. The amount of time that a drug stays in a person’s system is dependent on a number of factors, including the particular type of drug being taken.

According to the book Pharmacokinetics and Pharmacodynamics of Abused Drugs, some of these other factors include: 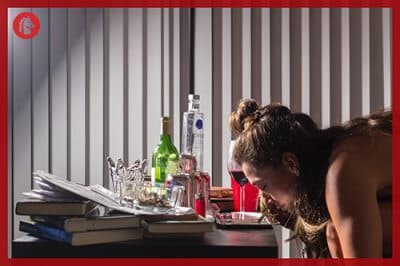 The question of whether or not a particular drug is “addictive” actually depends on what is meant by the use of the term addictive. This term is often used to insinuate physical dependence (developing both tolerance and withdrawal to some substance). While the development of physical dependence on a drug may constitute two specific symptoms of a substance use disorder (the current term that is used to designate both substance abuse and substance dependence), it is neither necessary nor sufficient to have both tolerance and withdrawal to a substance in order to have a formal diagnosis of a substance use disorder. Thus, there are clear diagnostic criteria presented by the American Psychiatric Association (APA) that specify the formal signs and symptoms of an individual who has developed a phencyclidine use disorder, meaning that an individual has developed a formal substance use disorder as a result of using phencyclidine (PCP).

Individuals who discontinue PCP may experience a number of emotional symptoms, including:

In rare cases, individuals have developed psychotic behaviors and seizures. The development of seizures may be associated with polydrug abuse. Symptoms may take several days to a week to appear and typically peak within 3-5 days after discontinuation. Some of the symptoms, such as depression and issues with motivation, have been noted to last as long as a year in some individuals.

Therefore, at the current time, it appears that individuals can certainly develop a substance use disorder as a result of abusing PCP, but they do not develop physical dependence on the drug.

Nonetheless, a number of anecdotal reports suggest that some individuals demonstrate withdrawal-like symptoms when they discontinue using PCP, and animal models of PCP abuse have indicated that animals may develop a withdrawal syndrome to PCP; however, this withdrawal syndrome is not demonstrated in humans in research studies. In the APA’s diagnostic criteria for phencyclidine use disorder, there is no designation that an individual can develop withdrawal from the drug. This indicates that any withdrawal symptoms associated with PCP abuse are most likely emotional and psychological in nature and do not represent a syndrome of physical dependence.

According to APA and other sources, such as the American Society of Addiction Medicine (ASAM), even though use of PCP is most often intermittent in individuals who abuse it, there is research that indicates that individuals who habitually abuse PCP do develop tolerance to the drug (needing more of it to get the same effects once achieved at lower doses).

ASAM specifies formal withdrawal management protocols for drugs; withdrawal management is the preferred professional term to what many refer to as detox or medical detox. Medications can be administered to individuals who have stopped using PCP based on the person’s specific symptom profile in an effort to control those symptoms.

Often, benzodiazepines can be used to deal with anxiety, depression, and even potential seizures in individuals who abused PCP with other drugs. These are administered on a tapering schedule, such that once the physician establishes a starting dose of the medication, they slowly cut down the dose at specified intervals to wean the individual off the drug and control the course of the person’s withdrawal. Because individuals who abuse PCP are likely to abuse other drugs in conjunction with PCP and may have developed physical dependence on those drugs, they may also require specific withdrawal management techniques for those drugs (e.g., alcohol abuse in individuals who abused alcohol with PCP).

Individuals who have co-occurring psychological conditions, such as depression, or have more than one substance use disorder would need these issues to be treated concurrently with their phencyclidine use disorder. Simply going through the discontinuation process is not a sufficient approach to treating any substance use disorder. Individuals need to be involved in formal treatment for a sufficient length of time (often 5-7 years of treatment and abstinence) before the potential for relapse is reduced to a point where the person is not at a significant risk to relapse in the future. In addition to therapy, the individual should be involved in social support groups and receive professional management of medical conditions if needed. They should also receive other interventions that are appropriate for the particular case, such as job training, housing placement services, training in social skills, etc.

dissociativespcp
Prefer getting help via text?
We're available 24/7 via text message. Signup below for access to our team when its convenient for you!
and many more...
✕
Instantly Check Your Insurance Coverage
Your information is safe & secure
At Oxford, we accept most types of private (non-government) insurance and offer a variety of payment options.
You can quickly and privately check your insurance benefits to see if you're covered for addiction treatment services. We’ll be able to tell you if your provider is in network with Oxford Treatment Center and all American Addiction Centers locations.
This means your treatment may be FREE1 depending on your policy, copay, and deductible.
Your Next StepsFind help & resources or learn more about Oxford.