Heroin usually is distributed as a white or brownish (called “black tar”) powder that is smoked, snorted, or injected. Injecting, or “shooting,” heroin is a particularly dangerous method of using the drug as it sends the whole amount of the drug straight into the bloodstream. This means that it has near instantaneous effects. Shooting heroin can raise the risk for overdose, expedite physical dependency, increase the potential health risks of the drug, and elevate the odds for addiction.

Increased Danger for Overdose and Other Complications 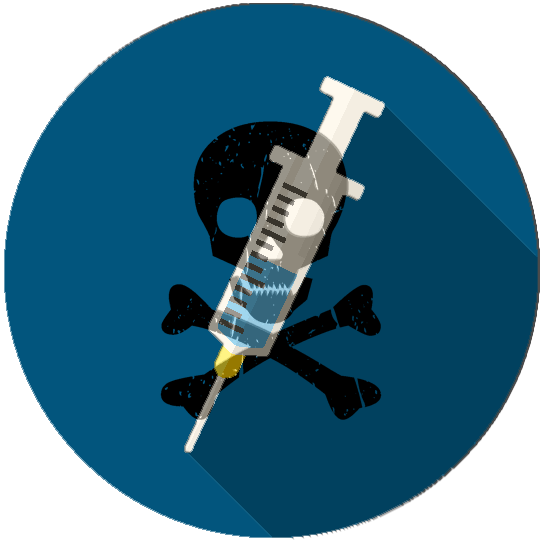 Since 2010, deaths from heroin overdose in the United States have more than quadrupled and continue to rise, as close to 13,000 people died from one in 2015, the Centers for Disease Control and Prevention (CDC) publishes. Heroin slows down breathing and other life-sustaining functions of the central nervous system like blood pressure and heart rate. It also lowers body temperature. When someone suffers an overdose it is because the dosage overwhelms the body and becomes toxic.

Injecting heroin greatly increases the odds for overdose, as it quickly puts a large amount of the drug into the system and straight across the blood-brain barrier. Oral ingestion of heroin is metabolized differently (and more slowly) in the body as opposed to the rapid rush of heroin when it is injected. A bluish tinge to skin and nails, being cold and clammy to the touch, difficulties breathing, pinpoint pupils, and loss of consciousness are all signs of heroin overdose. The World Health Organization (WHO) reports that injecting opioids, such as heroin, increases the odds for a potentially life-threatening overdose.

As heroin is an illegal drug, it is unregulated. Drug manufacturers and dealers may use other products as cutting agents to stretch their heroin batch. Things like cornstarch, quinine, powdered milk, sugar, or other drugs may be added to heroin. Individuals may have no idea what is actually in the heroin they are injecting. These adulterants may interact negatively in the body, possibly leading to additional hazards. The Journal of General Internal Medicine warns that adulterants that are added to heroin that is then injected can cause cardiac arrhythmias and other medical or clinical complications, presenting additional dangers.

Other drugs are often mixed with heroin, too, which may also be unknown to the user. Fentanyl, an extremely potent synthetic opioid, is commonly found to be involved in overdoses involving heroin. ABC News warns that this mixture can have deadly consequences.

Injecting heroin can also cause skin infections or abscesses around the injection site, collapsed veins, cardiac issues like infections surrounding the lining of the heart, the formation of blockages in the veins, and potential blood clots. Shooting heroin also carries an increased risk for contracting infectious blood-borne diseases, such as hepatitis C (HCV) or HIV/AIDS, the National Institute on Drug Abuse (NIDA) reports. These diseases can be transmitted through unprotected sexual contact and also through the sharing of dirty needles as they are passed via bodily fluids and blood. The CDC publishes that at current rates, at least one out of 36 men who inject drugs and one out of every 23 women who do so will contract HIV in their lifetimes.

Needles can also leave “track marks” on people who inject heroin regularly, causing permanent scarring and skin irritation. Heroin can also be injected just under the skin, called “skin popping,” which can cause abscesses and other issues.

Shooting heroin may lead to physical dependence in fewer uses than with other methods of abuse. When a person takes heroin, brain chemistry is altered, which impacts moods, behaviors, and actions. Shooting heroin causes the drug to work quickly in the system and also wear off more rapidly. This can induce a person to take more of it more often to keep feeling the drug’s effects. The National Highway Traffic Safety Association (NHTSA) publishes that someone who struggles with addiction to heroin may shoot up 2-4 time daily as the drug’s effects may only last for a couple of hours each time.

When someone uses heroin regularly, circuitry in the brain is actually changed to accommodate the continual presence of heroin, and it will stop working as it did before heroin was introduced. This means that without heroin, a person will likely have trouble feeling pleasure and regulating their emotions as well as suffer from physical and psychological withdrawal symptoms. Withdrawal symptoms from, and cravings for, heroin can be rather intense, which encourages a person to keep using the drug in order to avoid them. Individuals may then be unable to stop taking heroin, or to regulate how much or how often they take it.

ASAM publishes that nearly 600,000 people battled heroin addiction in 2015. Shooting heroin can make it more likely that a person will struggle with dependence and addiction.

How to Know if a Loved One Is Shooting Heroin

The CDC reports that heroin use is present within virtually all demographics and is rising in groups that traditionally have seen low rates of use, such as in those who are privately insured, have higher incomes, and women. Rates of heroin abuse have more than doubled in young adults between 18 and 25 in the last 10 years.

Essentially, heroin use is rampant everywhere. It may actually be lifesaving for loved ones to be able to recognize the signs of someone shooting heroin. These can include:

Heroin is a very potent and addictive illegal opioid drug, and injecting it is one of the most harmful methods of abuse. Treatment programs are specialized to help individuals safely detox from the powerful narcotic, and therapeutic methods aid in minimizing relapse, enhancing overall quality of life, and promoting a long and healthy recovery.