Snorting, Injecting, & Smoking Cocaine: What are the Dangers?

Taking any kind of illicit drug is incredibly dangerous. Because illegal drugs are not regulated in any way, they can theoretically be laced with anything, and even drugs like marijuana can contain substances that cause life-threatening complications. According to U.S. News & World Report’s interpretation of the data, there has been a steady increase in the number of cocaine-related deaths in recent years because more people are mixing cocaine and opioids. Researchers have not been able to determine whether individuals are unknowingly using laced products or if they are mixing cocaine with drugs like heroin and fentanyl intentionally.

Cocaine is an incredibly dangerous drug on its own, and mixing it with other substances only increases the risks involved. According to the Centers for Disease Control and Prevention, cocaine was responsible for 5,856 overdose deaths in 2014, which represents more than 12 percent of the overdose fatalities that year.

The Dangers of Snorting Cocaine 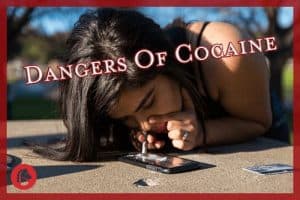 Snorting powdered cocaine is a common method of taking the drug, and the high from snorting cocaine typically lasts longer than the high from injecting or smoking it. According to the National Institute on Drug Abuse(NIDA), the body absorbs cocaine more slowly via the snorting method. That means it takes longer to feel the effects of the drug, but the high typically lasts for 15-30 minutes.

People who snort cocaine regularly will also damage the protecting lining inside their nostrils. This can make them more susceptible to both contracting and passing on hepatitis C, which is a blood-borne virus that can cause liver disease and make it harder to manage conditions like HIV. Many people who have hepatitis C do not exhibit symptoms for years, so anyone can theoretically pass it on to others without even knowing it. When people snort cocaine, they can transfer microscopic drops of blood from their nose to the straw, and other individuals may then inhale these particles. These drops can contain enough of the hepatitis C virus to transfer it from one person to another, and contracting hepatitis C is a very real risk among users who share straws when snorting cocaine.

Other short-term side effects include:

The most common and immediate side effects of snorting cocaine include nosebleeds, difficulty swallowing, and a diminished sense of smell.

The Dangers of Injecting Cocaine

There are a variety of ways to take cocaine, and injection is a common administration method for both powdered cocaine and crack cocaine. According to New Scientist, people started combining crack cocaine with acidic substances like vinegar in the 1990s in order to create a version of the drug that could be injected. Injecting any form of the drug is incredibly dangerous because in addition to the risks of taking cocaine in general, there are specific risks associated with using intravenous drugs.

When individuals inject cocaine, it hits their bloodstream immediately and travels directly to the brain. This results in a short-lived high that is characterized by feelings of euphoria and excessive energy. Injecting cocaine is especially dangerous when it comes to the risk of addiction because of the intensity of the high that it produces. In a review originally published in Papyrus, researchers found that the speed at which drugs hit the brain directly affects their addictive potential.

In addition to an increased risk of addiction, there are also short-term and long-term side effects of injecting cocaine.

The short-term health effects of taking intravenous drugs include:

People who inject cocaine frequently often run out of adequate intravenous injection sites, which may prompt them to inject the drug subcutaneously or intramuscularly. This can lead to additional complications, like tetanus, gas gangrene, necrotizing fasciitis, and wound botulism.

Sharing needles with other drug users poses serious health risks as well. Individuals can contract HIV, hepatitis, and tuberculosis in addition to bacterial, fungal, and viral infections when they share needles with one another. According to AIDS.gov, injecting drugs is responsible for roughly 10 percent of all HIV cases annually.

The Dangers of Smoking Cocaine

When powdered cocaine is processed with baking soda or ammonia, it can be smoked. Often called “freebase” or crack cocaine, this version of the drug is especially potent, and smoking it is incredibly dangerous.

When people smoke crack cocaine, the substance goes directly from their lungs to their heart and brain, and the effects come on almost immediately. The speed at which smoking allows cocaine to hit the body can increase the addictive potential of the drug. For that reason, smoking crack cocaine is actually more addictive than snorting or injecting powdered cocaine.

Because the effects of smoking crack cocaine come on so quickly and are so intense, the behavioral side effects can be more dramatic as well. Short-term effects of smoking crack include intense cravings, increased alertness, paranoia, depression, anxiety, and irritability. With continued use, side effects include mood disorders, delirium, hallucinations, and psychotic symptoms.

Because crack cocaine is so addictive but the high dissipates so quickly, people who smoke it regularly often put themselves at risk of overdosing. It is common for users to smoke a large amount of crack cocaine over a short period of time because they want to keep chasing the euphoric feelings they get from every hit. The only surefire way to eliminate the risk of suffering a fatal overdose is to cease smoking cocaine altogether.

Addiction is a complicated disease, and because relapse is common, individuals who want to stop using cocaine should seek help from professionals. If they stop using on their own but relapse because the symptoms of withdrawal are too uncomfortable to handle without medical intervention, they run the risk of overdosing. As soon as someone stops using a drug, their tolerance for that substance decreases. If they start using again and they smoke the same amount of cocaine that they did prior to quitting, it may be too much for their body to handle. However, with family support and medical intervention, it is entirely possible to stop injecting, snorting, or smoking crack cocaine once and for all and to stay on the road to recovery.

cocaine
Ready to get started?
We're available 24/7 to answer questions and help you make decisions about starting recovery from drug use.
Your Next StepsFind help & resources