Over 50 years have passed since ketamine first made its appearance in the world of pharmacology. In that time, medical professionals have learned more about the drug, its side effects, and its addictive potential. The World Health Organization has ketamine on its List of Essential Medicines; however, the drug does have many drawbacks. In 1999, the United States Drug Enforcement Administration labeled ketamine a Schedule III substance – a drug with some medical use as well as some potential for abuse and addiction. 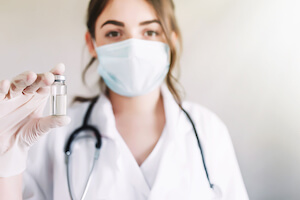 In 1962, professor Calvin L. Stevens of Wayne State University first synthesized a brand new chemical compound. The drug was ketamine, a new anesthetic that was fast, effective, and less habit-forming than PCP, the popular choice among physicians of the day. Eight years later, ketamine was approved for human use. The first large group to sample ketamine included soldiers fighting in the Vietnam War when it was used as a battlefield anesthetic.

Ketamine is a dissociative anesthetic. The drug is primarily used as an injectable pain treatment for humans and animals, as it creates a trance-like state that can relieve physical pain and also cause memory loss, which makes it an ideal sedative in battlefield medicine. Ketamine is a fast-acting drug, and it typically lasts a mere 25 minutes in the body, depending on how the drug is ingested. Medical professionals use ketamine as an injectable treatment for patients in intensive care, but illicit users tend to snort a powdered version of the drug.

Ketamine has been thrust into the national spotlight in recent years. Recent research into alternative therapies for depression have found that ketamine can be beneficial as part of therapeutic protocols. Findings suggest that a small amount of ketamine could help people suffering from psychological disorders like depression, chronic stress, and PTSD to experience relief.

Ketamine blocks glutamate receptors in the brain, hindering access to the nervous system’s main excitatory neurotransmitter. Without this access, the brain is less likely to feel anxious or overwhelmed. For individuals suffering from severe mental health disorders, particularly people struggling with stress-related disorders like PTSD, this research could be a lifesaver.

Though the drug does show some potential benefit, it is important to remember that ketamine is hardly a harmless substance and does carry some risk of addiction — particularly if it is misused.

Signs and Symptoms of Ketamine Misuse

While ketamine is not often prescribed for medical use outside of intensive care or in a supervised therapeutic setting, there are individuals who use the drug recreationally. Ketamine has been considered a “party drug” since the 1980s, as people snort it to experience extreme sedation and hallucinogenic properties. According to the Center for Substance Abuse Research, ketamine is primarily a “club drug,” found at raves and similar events. As a result, most individuals using ketamine illicitly are young, with those 12-25 years old making up nearly 74 percent of ketamine-related emergency room visits.

Using ketamine without a prescription is quite dangerous and people who misused ketamine will experience symptoms similar to those of alcohol intoxication. These include:

Though many people first encounter ketamine in a social environment, there are some individuals who receive it from their doctor. Ketamine can be an effective pain reliever after a severe injury or while recovering from surgery, but it is important that a doctor watch for signs of developing tolerance. Any drug that impacts the brain, particularly those that affect the central nervous system, can become ineffective with excessive use.

When a person feels they need more of the drug to achieve the desired effects, they are developing a tolerance to the medication, and this can quickly progress to dependence and addiction. An individual who first used ketamine under a doctor’s care may begin using it illicitly over time due to their growing physical dependency. This can be troubling, as chronic ketamine use can contribute to other health problems, such as:

The Emerging Health Threats Journal reports that fatal overdose on ketamine is very rare. The drug only lasts in the body for a brief time, and the amount an individual would need to overdose is incredibly high. However, ketamine can cause amnesia, and this can lead to someone either combining their dose with another substance or taking more than they intended. Both of these instances greatly increase the risk of overdose.

When someone decides to stop using ketamine, they may experience a period of withdrawal as the drug leaves their system, and their body readjusts without it. Withdrawal symptoms often begin around 24 hours after the last dose, and they typically last 4-6 days.

Ketamine withdrawal can also cause emotional discomfort and anguish. Because the drug creates a feeling of relief and sedation, the brain may stop creating the chemicals that produce those feelings naturally after prolonged use. As a person withdraws from ketamine, the brain must relearn how to produce those chemicals, which can take some time. Psychological withdrawal symptoms include:

Fortunately, ketamine is not a prevalent street drug, so individuals in recovery can expect less temptation than they might encounter with more common substances of abuse. It is wise for those in recovery from ketamine addiction to avoid dance clubs, raves, and other parties where ketamine or similar drugs may be present.

Once an individual is past the withdrawal stage, it is important that they continue treatment for their addiction, and ongoing therapy is essential. Working with a therapist to navigate the feelings that arise and to address the issues that contributed to the substance use disorder is essential to maintaining sobriety.

Addiction can take a heavy toll on your life and it’s never too late to reach out for help.. At Oxford Treatment Center we have helped countless individuals find meaningful recovery from substance use disorders and get back to living the lives they deserve.

If you or someone you love is struggling with the devastating effects of addiction and are unsure of where to turn, call our caring and compassionate admissions navigators today at . They can give you more information about the levels of addiction care that we offer at our inpatient rehab near Oxford, MS, help you start the admissions process, and answer your questions about ways to pay for rehab.

dissociativesketamineprescription
Prefer getting help via text?
We're available 24/7 via text message. Signup below for access to our team when its convenient for you!
and many more...
Your Next StepsFind help & resources or learn more about Oxford.