From the early hours of morning, Bill Hewitt crouched down on his hands and knees, pulling jagged pieces from piles of rubble and fitting them like a puzzle on the forest floor. The owner of a landscaping company in Franklin, Tenn., Hewitt employs more than a dozen people. But this was a job he had to do alone.

“My crew knows how to make things look nice,” he says. “But this project was different. It reflects the brokenness you feel when you finally face your addiction.”

Over the past several months, crews from Hewitt Garden & Design Center have been transforming Oxford Treatment Center’s residential campus and adding new outdoor spaces for therapeutic use. The new 12-Step Walk, a trail of gravel paths and small stone patios, represents the journey of recovering from addiction to drugs or alcohol.

Hewitt and his team carved the path through the woods south of the main lodge, taming undergrowth to open up a shaded level spot for each step along the journey. The path circles elements of the center’s ropes course before cresting a hill at Step 5 and descending towards a lushly planted lakeside garden at Step 12.

Hewitt’s team has also added several stone fire pits and small patios to the campus. The additions build upon Oxford Treatment Center’s approach of using its environment as an effective tool in the treatment process. Patients and therapists use outdoor spaces for group and individual therapy sessions, as well as for simple relationship building and personal reflection.

“When someone has been in active addiction to drugs or alcohol, they’ve experienced a disconnection from the world around them and the people who care about them,” said Interim Clinical Director Chip Peterson, M.Ed., LPC. “Learning how to rebuild those connections is an important part of recovery.”

At Step 1, that disconnect is laid bare. Rough-cut internet cables with exposed wires jut out from either side of the pieced-together patio.

At the narrow entrance, a spike-shaped rock stained with splatters of red paint blocks the way — disruptive and ugly, like the addiction it represents.

Surrounding the space is a collection of unwanted shrubs and trees. Broken boxwoods and crooked pinetrees, they’ve been picked over for years; customers chose more handsome specimens at Hewitt’s landscape center. The patio floor is a mosaic of rejected sandstone, leftover bricks and old pieces of concrete.

“There’s a lot of meaning in that little patio,” Hewitt says. “The whole thing is made of rejected materials. But at the same time, for me, all those pieces represent the people of the world. Whether you’re a big piece or a little piece, you’ve got your place. You’re important.”

As with each of the 12 steps along the walk, the space is defined by an imposing boulder. For Hewitt, it represents God’s abiding presence at each step.

For Step 1, Hewitt says, he requested from his supplier simply a “big, pretty boulder.” When it was delivered, he couldn’t believe what rolled off the truck: A huge, heart-shaped boulder, with a dark line cutting right across the middle.

“To me, that represents God’s heart,” he says. “It breaks because of your addiction.”

Hewitt is not in recovery himself. But taking on this project, he was determined to improve upon the more straightforward 12-step walk installations he’d seen on other campuses.

He spent time studying the AA Big Book and listening to a friend who is a recovering alcoholic. He talked through the project with his wife. He prayed a lot.

“We had a lot of discussion about how to make it meaningful,” Hewitt said. “I’d think about it while making that three-hour drive down to Mississippi on the Natchez Trace. It was a wonderful, peaceful place to think through what it should look like.”

Aside from the first and final steps in the walk, each step is simply marked: a stone patio, a boulder, an inscribed plaque. When it came to capturing Step 12, Hewitt knew exactly the spot to use. 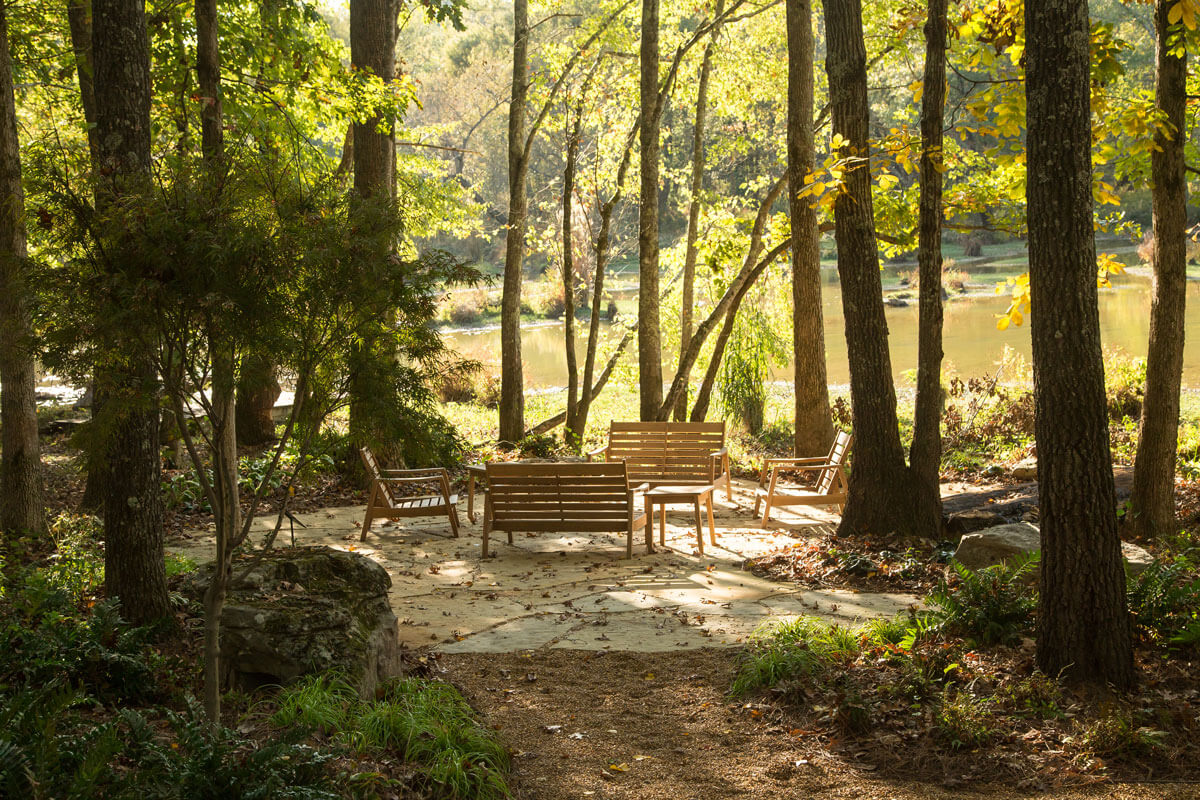 “I thought this was the most peaceful place on the whole property,” he says of a tucked-away clearing beside lake. There’s sunlight filtering through the leaves and sparkling off the surface of the water. To that natural setting, Hewitt and his team added a waterfront swing and a sandstone patio furnished with a teak bench and chairs. “It’s meant to be like a little Garden of Eden,” he says.

The plantings are wild, lush and colorful. Hewitt smiles with the knowledge of what it will look like here in spring. The azaleas will be a riot of pink, white, red, purple and yellow. The hydrangeas will be dressed up in their pom-pom petals, while the Japanese maples wear leaves of lace. The hostas and ferns will unfold at their feet in a sea of green.

To the side of the patio lies a pair of massive logs, bench-high and as long as a man is tall. Hewitt had the logs pulled from a burning pile of brush on the other side of the campus, where land was cleared for a new covered riding arena.

The fire scorched the bark from the logs, but didn’t burn the heart. Having gone through the flames, Hewitt says, the logs are now more resistant to rot and will last for years.

As in life, it seems: Sometimes you go through hell to rest in a Garden of Eden.