Addiction is a chronic disease involving changes to the reward structure of the brain, causing compulsive drug-seeking behaviors that trigger the release of neurotransmitters like dopamine and serotonin. Addictive substances lead to feeling relaxed, energized, upbeat, or happy – at least for a short time. Many people who develop addictions escalate how much of a substance they consume until they feel like they need the drug in their system to feel “normal.” This involves the body’s physical dependence on the drug and a tolerance to the substance, leading to greater consumption to reach the original high.

Popular culture depicts those struggling with addiction as unemployed, bedraggled, and often homeless. While there are many vulnerable populations who struggle with addiction, many seemingly successful individuals also struggle with this condition. High-achieving, wealthy people in white-collar careers experience substance use disorders at high rates, often beginning drug abuse as students and then continuing the problem when they enter a competitive, stressful workforce. Some professions that involve stressful lifestyles are at greater risk for addiction and substance abuse than others.

According to a 2012 study published by the Substance Abuse and Mental Health Services Administration (SAMHSA), the white-collar jobs with the highest rates of heavy alcohol abuse include:

Illicit drug use among these professions included:

Rates in white-collar professions of diagnosed, past-year substance use disorder include:

Among the higher levels of educated, white-collar professionals, SAMHSA found that substance abuse rates were on the rise. Heroin, opioid drugs, prescription stimulants, and alcohol are among the most abused substances in various professions. Substance abuse begins earlier for high-achievers, with white-collar young adults at 2-3 times the risk, by age 26, of developing an addiction compared to lower-income adults. Wealthy adolescents and young adults, who often become wealthy and high-achieving white-collar workers, were twice as likely as the national average to develop addiction to stimulant drugs, largely because of Ritalin and Adderall abuse, which may lead to experimenting with cocaine. 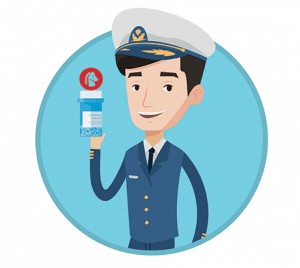 The Aircraft Owners and Pilots Association (AOPA) lists the requirements of the Federal Aviation Administration (FAA) around substance abuse diagnoses and treatment. The federal regulatory body requires pilots, whether private or commercial, to complete one year of abstinence after undergoing detox and rehabilitation. This requires documentation from physicians, therapists, and addiction treatment specialists.

A disturbing 2014 report found that 40 percent of pilots killed in noncommercial airplane crashes had some kind of medication in their body. The most common were antihistamines and heart medications, which can cause drowsiness or indicate an underlying medical condition that can impair one’s ability to fly. However, illicit drugs were found in 4 percent of deceased pilots.

However, these statistics do not involve professional pilots, of which CNN reports there are 90,000 commercial flights in the world, carrying over 8 million passengers to various destinations. The National Traffic Safety Board (NTSB), along with the FAA, keeps record of pilot accidents. Most fatal accidents involving intoxication or impairment from substances come from the civil sector rather than the commercial sector. The NTSB found that, between 1990 and 2012, 3 percent of accidents were due to an impairment or incapacitation from drugs or alcohol; 1.8 percent of accidents were due to incapacitation from an underlying medical condition, without medication.

The C-Suite and Substance Abuse

Members of the “C-Suite,” or jobs like CEO or COO that begin with the letter “C,” abuse substances at very high rates. Some studies suggest that this is, in part, due to higher rates of co-occurring disorders, like sociopathic or psychopathic personalities.
Traits that are associated with high-level management and leadership include: 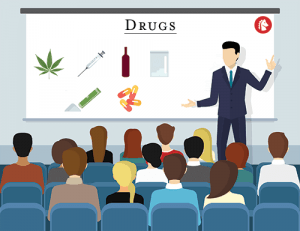 These traits are also, often, associated with substance abuse and addiction. Pleasure derived from succeeding in closing a deal or making a sale releases endorphins and dopamine, which are associated with the reward center in the brain. Intoxicating substances like cocaine and alcohol also release neurotransmitters associated with pleasure and mood.

Genetics associated with brain development, including the receptivity of dopamine receptors, may have something to do with why high-level executives struggle with “workaholism,” alongside other addictions. However, family history and trauma, which are also behind many individual’s drives to become successful, are contributing factors in the development of substance abuse, too. Those in these top-level positions typically abuse alcohol and prescription drugs, especially painkillers.

The culture around CEO positions allows them to continue to manage their work lives, so many may not believe they have a problem with substances until their home lives fall apart because of it.

Several reports found that lawyers have high rates of alcohol abuse and may also struggle with heroin or opioid abuse. One analysis reported that lawyers struggled with alcohol in particular due to job-related stresses like:

The feeling of personally compromising one’s beliefs in order to represent certain clients drives a lot of mental and behavioral struggles, including substance abuse, in the legal field. One survey found that 21 percent of lawyers qualify as problem drinkers, which includes alcohol use disorder; 28 percent struggle with depression; and 19 percent struggle with anxiety. Alcohol abuse and mood disorders are closely linked.

One of the greatest risks substance abuse poses for doctors and dentists is their ability to hide their addiction. They know the signs of addiction while also having access to prescription medications like opioids. These professions are high-stress, with long hours, and stress is closely associated with abusing drugs or alcohol.

One interview of 55 doctors found that 38 of them, or 69 percent, abused prescription drugs. While the general rate of addiction among the public is 8-12 percent, doctors may develop these conditions at higher rates than the average individual due to higher rates of job and family stress.

Another report found that dentists were as likely as the general public to develop a substance use disorder, with about 10-15 percent reporting these struggles, according to the American Dental Association (ADA).

It is important to recognize the signs of substance abuse and addiction regardless of personal stereotypes about what an “addict” looks like. Getting help from evidence-based treatments, including detox and rehabilitation, can improve one’s work life and mental health, and also improve one’s work-life balance and social relationships.