PTSD Triggers: What are the Warning Signs? 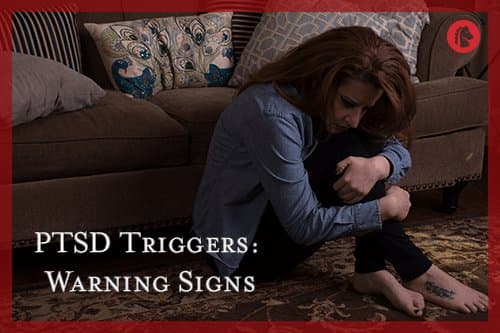 Post-traumatic stress disorder (PTSD) is a serious, and potentially debilitating, condition that can occur in a person who suffers a traumatic or life-threatening event. The condition began to be diagnosed in soldiers after World War I, when it was called shell shock. As greater understanding of the brain’s reaction to highly stressful events developed in the medical field, the condition was applied to sources of trauma other than combat. Currently, about 3.5 percent of American adults struggle with PTSD, and about 11 percent will develop PTSD at some point in their lives.

The condition may fade on its own, but for many people who develop PTSD, getting treatment from mental health professionals is the only way to ease the symptoms and overcome the condition. A person may not develop PTSD until well after the stressful event due to dissociation, blackouts, or other experiences. Events that can lead to PTSD include war, domestic abuse, child abuse, natural disasters, terrorist events, rape or sexual assault, or a car accident.

Symptoms associated with PTSD include:

The Triggers of PTSD Symptoms

When a person develops PTSD, understanding what triggers the stress reaction is an important aspect of the healing process. A trigger can be anything – a place, an object, a sound, or a person – that can lead to panic, mood swings, aggression, or flashbacks. Depending on what kind of event led to the development of PTSD, triggers will be different. For example, a survivor of a car accident may not want to get into a vehicle for several weeks or months after surviving the crash. A person who was robbed may worry about people following them in public. For other people, triggers may be subtler, like a specific song, type of food, or time of day.

Triggers may be internal or external.

External triggers can include:

If symptoms persist or worsen, getting help from a medical professional who specializes in PTSD will be important. Working with a therapist who understands the condition and can help uncover triggers, manage stress and anxiety symptoms, and bring the person back to a sense of wellbeing is vital.

There are many causes of PTSD, but sexual assault is unfortunately one of the most common. While anyone may experience sexual assault, women make up most of the victims.One size treatment doesn’t fit all. We will tailor treatment for your needs.
Call Now (888) 498-5394

A sexual assault is a nonconsensual sexual encounter between at least two individuals. This kind of assault may occur through physical force against the victim, using a date rape drug to make them intoxicated, or when the victim is otherwise unable to consent. Roughly one in every five women reports being raped or sexually assaulted during their lifetime. The numbers for men and children are less well known because these conditions are likely underreported.

After the assault, the victim will likely experience confusion, anxiety, panic, guilt, shame, or fear. These are normal reactions to a traumatic event. However, if these feelings persist for several weeks, get worse over time, or do not occur until time has passed, the victim may develop PTSD.

There are specific triggers associated with people struggling with PTSD after a sexual assault.

Some of these may include:

Because substance abuse and PTSD are closely associated, it is important to get help if signs of PTSD surface. People who are victims of assault, crime, natural disasters, accidents, or combat are not at fault for their condition, and they deserve evidence-based treatment to help them heal.