‘Do I Have a Mental Health Disorder?’ (Recognize the Symptoms) 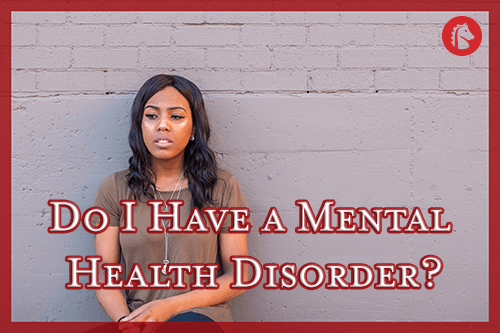 Most often, the majority of the American public does not think or talk about mental health in a truly clinical way. Many people will informally conclude that a friend, loved one, coworker (or just about anyone) has a mental health affliction of some type. It’s not that America is full of amateur psychologists, but rather that psychology terms permeate our language and thinking.

This is mainly because psychology – the study of the human mind and human behavior – helps people to understand others. Sometimes, the inquiry is a serious one. A person may, for one or more reasons, believe that something is amiss and help from a mental health professional may be necessary. Whether it is self-concern or concern for another, thinking about what may be happening is the first step to getting help if it is needed.

The DSM-5 and Mental Health in America

The Diagnostic and Statistical Manual of Mental Disorders (currently in its 5th edition, and abbreviated as DSM-5) provides essential guidance to mental health clinicians, particularly in the area of diagnosing a mental health disorder, including substance use disorders. The DSM-5 provides a detailed description, including diagnostic criteria, for each disorder included in its pages. The very best way to get an accurate overview of all the disorders listed is to refer to the official DSM-5 table of contents.

Per the table, the following are all the major categories of disorders that are currently listed:

The best practice is to speak with a qualified mental health professional who can provide a clinical assessment. Self-diagnosis isn’t possible. Often, symptoms overlap. For instance, the type of depression that is a feature of bipolar I disorder can be different from that involved in major depressive disorder. A person may also have co-occurring disorders, such as an alcohol use disorder and body dysmorphic disorder.

It can be exceptionally helpful for a person to do independent research and even use an informal screening tool to determine if one or more mental health issues may be present before consulting a professional.

The best practice is to speak with a qualified mental health professional who can provide a clinical assessment. Self-diagnosis isn’t possible.

According to the National Alliance on Mental Illness (NAMI), taking mental health screenings is a recommended health practice in general. Research shows that about 50 percent of chronic mental health disorders will emerge by the time a person reaches 14 years of age, and about 75 percent by 24 years of age. Yet, on average, it takes a person 8-10 years to start treatment. The gap reflects, in great part, that many individuals may not have a meaningful understanding of their mental health. Screenings are particularly important because mental health disorders tend to worsen over time if not treated.

NAMI offers a screening tool for each of the major mental health disorders recognized in the DSM-5. Again, each disorder has its own set of symptoms, and symptoms can overlap between disorders. However, speaking broadly, a person will want to pay attention if one, or more, of the following symptoms emerges (can be related to an event or simply seem to appear out of the blue):

The American Psychiatric Association (APA) also provides an overview of some of the symptoms that are most commonly found to occur with different mental health disorders, as follows (Note: Any overlap with the NAMI list above have been removed from this list.):

The NAMI screening tools are designed for ease of use. The online tools include questions that a therapist would ask a client. For instance, the following five questions are taken from five different screening tools (by disorder):

In the past, it was understandable that a person may not have wanted to seek a mental health assessment. Most unfortunately, a lack of understanding of the medical basis of mental health disorders led to stigmatization that in turn prevented people from coming forward to get treatments that could have helped them. But such is not the case today. In fact, NAMI and participating agencies and organizations sponsor a mental health awareness week each year. NAMI makes numerous resources available to the public during this week, and they are still available at the end of the week on NAMI’s official site. The materials are designed to educate the public, advocate for equal and adequate care for individuals with mental health disorders, combat any lingering stigma, and provide overall support.

Mental health is entitled to the same visibility and attention as other health conditions in the US, such as diabetes, heart disease, and cancer. The hope is that awareness efforts not only enlighten society on the whole, but also that important information on mental health will reach those who can best be served by it.