‘Nobody Does Anything Alone’ 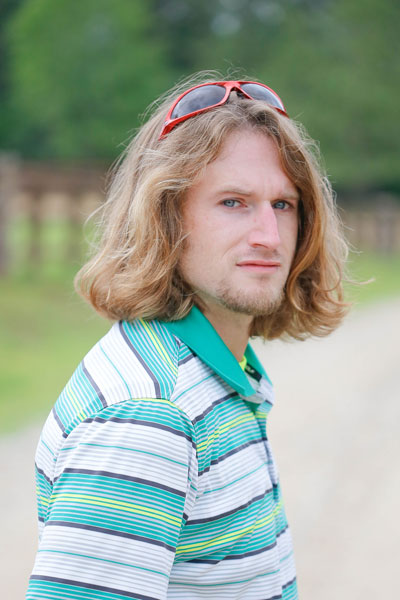 Just like the ropes stretched tenuously from tree to tree, connections form among strangers as they navigate tests of skill and balance together.

For Hank Holmes, watching their progress can feel profound: This interaction would have been impossible just a few days or weeks before.

“Especially among opiate and heroin addicts, they have become completely disconnected from other people and focused only on when their next hit is coming,” said Holmes, who leads Oxford Treatment Center’s outdoor challenge course program.

“From my perspective,” he said, “if for 45 minutes they’re engaged in building social skills and working as a team, we’ve accomplished something significant today.”

An experiential therapist at Oxford Treatment Center for nearly three years now, Holmes works with patients in groups during their time in residential treatment for alcohol or drug addiction. He leads them through a series of obstacles — installations of low ropes, posts and planks built into the wooded acreage of the residential campus. With each obstacle, Holmes presents the goal and the rules, then steps back as the group works together to figure out the challenge.

For patients, their experience on the challenge course offers opportunities both to learn about themselves and to make observations that relate directly to their addiction and recovery.

“I don’t want to rob you of the chance to learn something.” 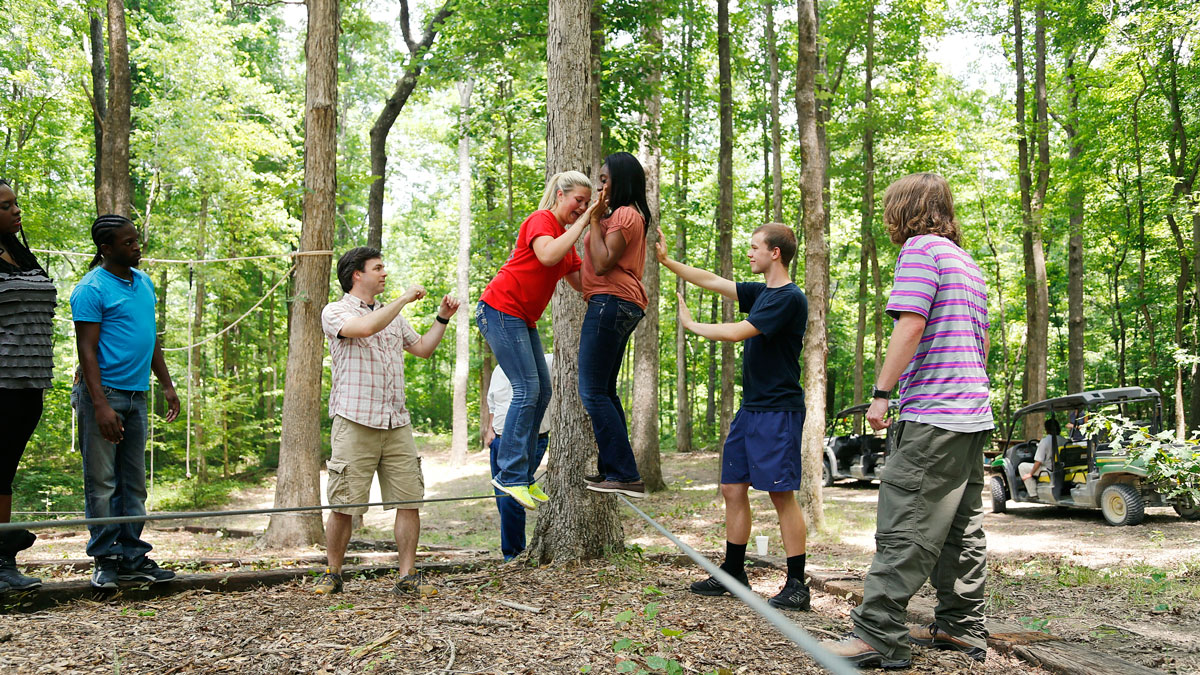 Like all experiential therapy programs at Oxford Treatment Center, the value of the challenge course goes well beyond just providing fun outdoor activities. It opens doors in treatment, to facilitate learning in a way that’s powerfully tangible. The process taps a truth everyone has experienced: We learn more deeply when we discover things for ourselves, than we do when someone else simply tells us.

“The hardest part of my job is keeping my mouth shut,” Holmes said, “and not giving the answer away when a group is close to figuring out a challenge. I have to tell them, ‘I am not just standing over here smiling: I am biting my lip. I don’t want to rob you of the chance to learn something.’”

For example, he said, in one obstacle, the group is not allowed to talk as they figure out how to cross from one platform to another without touching the ground in between. The silence often works to show members of the group how they’re perceived by the others.

“Since they’re not allowed to talk, the group just goes by what they know of a person to predict what they’re going to do,” Holmes said. “One man ended up doing something the group didn’t expect, and he realized: ‘They don’t know me at all.’”
Holmes invited the man to consider whether his 3-year-old daughter knew him any better than the group did, since he’d been an alcoholic since before her birth.

“When he came back to visit after he completed treatment, he told me that realization was a turning point for him and a motivation to stay sober,” Holmes said. “He said, ‘My own flesh and blood didn’t even know me.’ He could see that his unpredictability — the way his moods changed whether he was drunk or not — was affecting his daughter.” 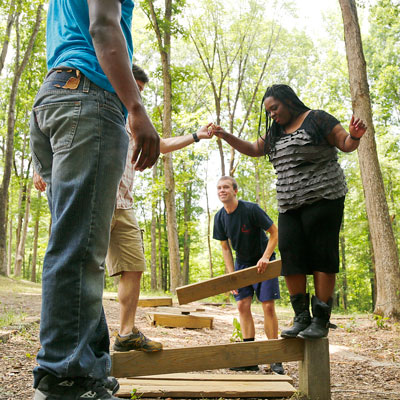 While being part of such “A-ha” moments is a highlight for Holmes in his work as a therapist, there’s also a slower, subtler reward in watching how patients grow during the 30 to 45 days they spend in residential treatment. It’s as evident on the challenge course as it is in other areas of their program.

“The person who is four or five weeks into the program is not the same person who came in here,” Holmes said. “When you have someone who on the first day is moping around, then at four or five weeks they’re encouraging the new people to try the challenges — that’s a good gauge for how much they’re internalizing what they’ve learned.”

The way those interactions evolve during treatment relates directly to preparing patients for life in recovery, he said.

“Above anything else, my goal is for them to be better able to work with their family,” Holmes said. “I want to help them see: Nobody does anything alone, and my family does depend on me for certain things.

“Beyond that, it’s about the way they will interact with their AA or NA community. They don’t have to step right in and be the leader of the group. But if the skills they learn with us help them better connect with others and care about others, that’s a huge step forward in their recovery.”

“Being part of their progress is a remarkable experience.”

For his own motivation to help others — particularly patients in Oxford Treatment Center’s Young Adult Program — Holmes relates experiences in his youth that left him “scared straight.”

“I’ve been in the type of trouble a lot of these kids have been, and I understand their struggles,” he said. “I just hope that I can say something and a light bulb will go off for them.” 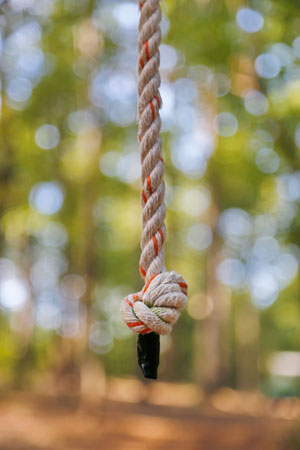 While not in recovery from addiction, Holmes found himself facing felony drug possession charges as a teenager, just a month shy of his high-school graduation. Since it was a first offense, he was able to escape a potential 20-year prison sentence. But four nights spent in jail coupled with a judge’s stern warning to stay clean was enough to change his course.

“I was fortunate to be in jail with a bunch of old-timers who had been in and out a bunch,” Holmes said. “They beat it into my head: ‘You’ve got your future to look forward to. You don’t want to be like us.’”

Holmes went on to attend the University of Mississippi. He took his pledge to stay out of trouble seriously. “I never set foot in a bar in Oxford,” he said. “A lot of it had to do with seeing my mother’s face while I was in jail — trying to talk to her through the glass, telling her this was not her fault. I’ve never seen her so disappointed, embarrassed and scared. The whole experience was a real wake-up call.”

After earning an undergraduate degree in psychology and criminal justice, Holmes followed a passion to help young people, serving as a counselor at a rustic long-term outdoor residential treatment center for troubled teens in northern Alabama. During his tenure there, he also became certified as a Wilderness First Responder.

Holmes was recruited to join Oxford Treatment Center in 2013 and began developing the challenge course program, building it to standards set by the Association for Challenge Course Technology (ACCT). The course undergoes annual inspections for compliance, effectiveness and safety.

Going forward, his goals include expanding the course with more elements, as well as participating in Oxford Treatment Center’s growing wilderness therapy program.

“Some of the best group sessions we’ve had are sitting around a campfire — getting people out of their comfort zones, enabling them to tap their own feelings in a way they wouldn’t otherwise,” he said. “Being part of their progress is a remarkable experience.”