As of May 1, Clinical Therapist Porter McKee, LCSW, is leading a new evening IOP group at the Oxford Outpatient Office on University Avenue.

The program is suitable for adults ages 18 and up whose substance-abuse problems are appropriate for outpatient treatment. The group meets Mondays, Wednesdays & Thursdays from 6-9 p.m. Oxford Treatment Center accepts most commercial insurances.

For admission information, call the Oxford Outpatient Office during business hours at 662.281.1306 or email McKee directly at pmckee@contactaac.com.

“When my slippers came out, the bottle came out.” That was how retirement began for Linda*. She had wrapped up a successful, rewarding career as a schoolteacher — only to find alcohol invading the wealth of leisure time she suddenly had on her hands.

“My identity had been tied up in my career, and my children were gone,” she said. “I bet there are a lot of other people who are lonely in retirement and resort to drugs and alcohol. But no matter what your age is, you can get sober and clean.”

Today, Linda is 17 months sober after completing the 10-week Intensive Outpatient Program (IOP) at Oxford Treatment Center’s Tupelo Outpatient Office. While IOP often serves as a follow-up to residential treatment, for some people it can stand alone as the right start to recovery.

hen Linda joined Oxford Treatment Center’s IOP, she doubted that it could actually help. Her hope grew after the first several small group and individual sessions with Clinical Outpatient Therapist Porter McKee, LCSW. His guidance helped Linda fully engage with the first three steps in the 12-step program for the first time.

“I had been going to AA, and I had had periods of sobriety over the past 20 years,” she said. “But I realized, I had gone straight to the fourth step without working the first three thoroughly.

“With Porter, I really looked in detail at the unmanageability of my life and the powerless I had over alcohol. He had me share that step with the group, which was a really powerful moment for me. That experience broke through a lot of the denial that I’d had in my mind all those years.”

The process of writing, reflection and individual therapy, coupled with sharing in group therapy sessions, provides a chance for peer empowerment among IOP group members, McKee said. Within that safe and encouraging circle, people can process the thoughts and feelings that had been causing pain and fueling addiction for many years.

For Linda, the group dynamic helped her move beyond her initial hopelessness. “I don’t think I can do this,” she had told McKee. He answered: “Yes, you can.”

“Linda had tried to get sober many times and failed,” McKee said. “I don’t look at relapse as a failure. My experience with over 20 years treating people in addiction is that if they are still alive, they can get sober.

“I work with patients from a strengths perspective style of counseling, and in Linda’s case, positive reinforcement was a key need.”

“Until you get sober you don’t really realize you had a problem.”

The grip of alcohol on Linda’s life had taken hold slowly and subtly. Unlike with illegal drugs, alcohol is an accepted part of social culture — making it harder to draw the line between casual drinking and alcoholism.

“All my friends that I socialize with drank, and some people could handle it,” she said. “But I would go out and socially drink, then come home and drink by myself — and wonder why I would do that.” 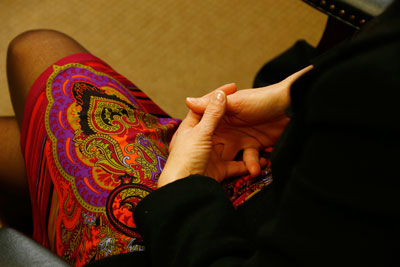 Linda began drinking more after she entered retirement and had the luxury of sleeping it off until lunchtime. The urge to drink was present each day, and in her mind she gradually nudged the start time up from 5 p.m. to 3:30 in the afternoon.

“I never did take the morning drink that would prove to myself I was an alcoholic,” she said.

Still, as she got older, health problems related to excessive drinking began to crop up. Her blood pressure was elevated, and a test on her liver function was concerning. Bruises on her face and arms revealed how often she’d begun falling.

“One of the last doctors I went to wanted to know how much I drank the night before,” she said. “When I told him, I thought, ‘That’s not that bad.’ But the doctors thought it was.”

Linda’s physician was preparing to hospitalize her for dehydration as a result of her alcohol abuse.

“It was hard for me to accept that’s what was causing all these problems,” she said. “When you’re in the middle of the situation, it doesn’t seem so bad. You can ignore the problems, because you can just numb out again. Until you get sober, you don’t really realize you had a problem.”

Linda’s AA sponsor told her it was time to seek treatment for alcoholism. She chose to attend Oxford Treatment Center’s evening IOP in Tupelo, which would allow her to continue caring for her elderly mother while attending treatment.

“I prayed about it, and this door opened up,” she said. “When I enrolled at the IOP at Oxford Treatment Center, I immediately felt heard. I felt listened to. Porter listened to me talk longer than anyone ever has before, and he really seemed to want to help me.”

Among the most important ways her experience in IOP changed her outlook, she said, is the education she received about the nature of addiction and its effects on the brain.

“The disease concept I learned helped me really understand what was going on in my mind,” she said. “Once I understood it was my disease talking, I was able to say, ‘Don’t listen to those thoughts.’ I’d always thought it was my mind and my feelings telling me to go out and drink again, so I’d listen. And it always got worse, never better. Having this new understanding changed my whole life and gave me hope.”

Today, Linda continues to benefit from the therapeutic relationship by taking advantage of the weekly Aftercare sessions McKee leads in Tupelo.

“I have watched Linda become more confident and open-minded,” McKee said. “She is a very important part of the Aftercare group, and has begun helping others and encouraging the new members.”

Aftercare is a two-year program of support that follows residential and outpatient treatment, bolstering one’s chances of continuing in sobriety. It is offered each week at all three of Oxford Treatment Center’s outpatient offices.

For Linda, Aftercare has proven to be an essential piece of recovery, providing a more intimate setting to talk candidly about how she is doing with a trusted therapist and other Oxford Center alumni.

“Porter keeps it really informal,” she said. “I know I’m being listened to because he’ll repeat what he has heard me say. Then he’ll add something from his own experience that brings strength and hope to what I’m going through, or helps me see things in a different way. And he does that with every person in the room.”

“I leave one piece out, it won’t work for me. But because of this program, I have peace. I’m grateful and life is good.”

*Name has been changed.