Behind the Front Desk, a Beacon of Hope 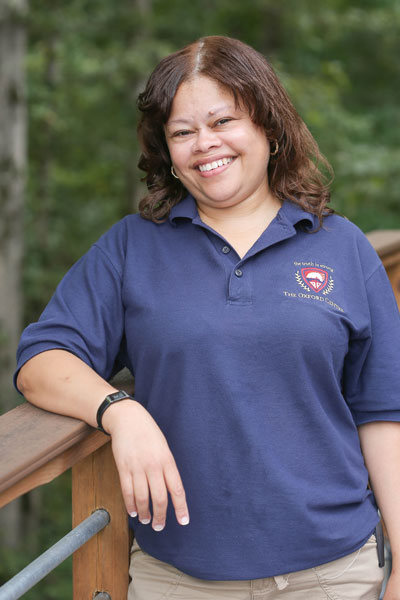 Jewel Jenkins has a smile that gleams like a well-polished gem, its facets reflecting depth and dimension from every angle.

“It’s hard for me to put it into words, but I love living life today,” says Jenkins, who staffs the main lodge front desk as a clinical assistant at Oxford Treatment Center.

For Jenkins, the help she offers extends beyond doing paperwork for therapists and making sure patients get to their sessions on time. She often sits in on group meetings and shares her own experience — revealing both the pain and the peace behind that striking smile.

Jenkins was raised on the west side of Chicago. With an African-American mother and Caucasian father, she felt unaccepted by both sides of her family and struggled to know where she belonged.

“I really had a hard childhood, not fitting in,” she said. “I think that’s what led to my drug use. Those people didn’t care: As long as you’ve got money, you can fit in.”

Jenkins spent nearly 18 years of her life in addiction. Along the way, she was abused by the men who funded her habit— her self esteem so low, she’d take whatever they’d offer.

It was the 2001 death of her older sister from a heroin overdose that opened Jenkins’ eyes and convinced her to try to get clean.

“I couldn’t live like that anymore,” she said. “Walking the streets of Chicago at 2 a.m. Jumping in cars with men I didn’t even know. Saying, ‘My kids can wait to eat. I’ve got to feed my addiction.’

“That kind of life is a painful walk. I wouldn’t wish the disease of addiction on my worst enemy.”

“I don’t ‘make time’ for recovery. I make recovery number one; the other things in life, I’ll make time for them.”

Entering treatment after her sister’s death was the beginning of recovery for Jenkins. Still, she didn’t buy into NA and the importance of working a 12-step program.

“I was so much in denial,” she said. “Nobody could tell me I was an addict. I thought all I had to do was stop using and I would be OK.”

Jenkins had been clean for four years when she heard a talk that changed her mind. She started working to heal her relationships with her children, her family and others.

“I started making amends,” she said. “I learned how to live it, this program of recovery. Every day of my life, I’m learning something new about Jewel and how I need to change. The ‘God of my understanding,’ he’s helped me a lot. He’s first.”

Jenkins began going to NA meetings and got a sponsor. She started spending time with a new group of people, and things started looking up.

“I keep doing the step work today — talking to my sponsor and making meetings,” she said. “I know that, once I walk away from it, my disease is right there waiting. So I don’t ‘make time’ for recovery. I make recovery number one; the other things in life, I’ll make time for them.”

Jenkins also takes care to moderate her relationships with people in her life who still use.

“I love them from a distance,” she said. “It’s important for me to be able to say to them: ‘Look, if I could come out of this, anybody can.’”

hile she was in treatment for addiction, Jenkins met her current husband, Danny, who is also in recovery.

“He would come out to the treatment center and share his story,” she said. “I had been so abused by men, I wasn’t interested in him. But as the years went by, I saw him at a meeting. My self-esteem was so much higher by then, I actually approached him and asked if I could take him out to dinner. He accepted.”

The two were married three years ago and soon moved south to Mississippi for his work. Jewel, who had previously worked at a homeless shelter in Chicago, joined Oxford Treatment Center in May 2013.

She commutes an hour both ways in order to be part of Oxford Treatment Center’s team and encourage patients as they begin recovery.

“I share with them, I fuss at them, I laugh with them, I cry with them,” she said. “And because I give respect, they give me respect back. I feel like it’s my calling to help, wherever I’m needed.”

Jenkins says that’s a sentiment she shares with her fellow staff members at Oxford Treatment Center.

“Anyone that is suffering from the horrible disease of addiction and wants a better life: Come join us,” she said. “We are waiting for you.”