Events an opportunity to reconnect, reflect

David O. wanted his wife to see the beautiful place where he got clean. He wanted to see the staff again, and to reflect on how much life had changed in the past six months. But the sweetest reunion of all was with a 10-year-old buckskin mare named Irene.

“This horse touched my heart,” said David, who credits equine therapy with giving him a new perspective on recovery.

A recovering heroin addict, he made a 700-mile trip from his home state to take part in Oxford Treatment Center’s 2018 Anniversary Weekend on June 2. The day included alumni speakers, experiential therapy demonstrations and a celebratory dinner.

David said returning for the event was a natural choice — given he’d been willing to go many more miles in pursuit of drugs.

“This place saved my life,” he said. “It helped me save my life.”

Addiction is a disease that affects the brain and body. It’s woven deeply into a person’s life patterns and relationships, and often rooted in past pain or trauma. That’s why effective treatment takes a long-term approach, and addresses addiction in a multi-faceted way.

For David, the first a-ha moment of his recovery journey came through equine therapy. During his time in treatment, Irene was the horse he rode, brushed and cared for. His time in the saddle became a metaphor for letting go and accepting the direction he was being given for recovery.

“When I would try to control her, she wouldn’t let me,” he said. “When I finally stopped trying, she just followed the right way, and I could relax. That has become instrumental in my life.”

For Patrick E., his time on the Etta campus was an opportunity to remove the blinders that kept him blaming everything and everybody else.

“We’ve all been down the path of destruction before,” said Patrick, who spoke to fellow alumni in the meeting room overlooking the center’s private lake.

“I joked around while I was here in treatment and took nothing seriously at first,” he said. “I didn’t know who I was; I just knew I didn’t want to use drugs anymore. What I learned here is that I had a lot more to work on. I blamed everything else, when the real issue was inside me.”

Stacy T., who has been sober more than three years, said she also came to Oxford Treatment Center reluctantly when her alcoholism became unmanageable.

“Something happened while I was here,” she said. “At first I didn’t want to do the work, but I started to become open-minded and willing. I realized had no idea who I was or what I was running from. I was a broken human being. Thank goodness for Oxford Treatment Center, because this is where recovery began for me.”

After an afternoon at the Etta campus, alumni and staff gathered for a plated dinner with live music at the Powerhouse Community Arts Center in Oxford. It was catered by A&N Catering, led by the owners of GRIT Restaurant in Taylor. Ricky Burkhead and Damien Wash performed as Us, The Duo. 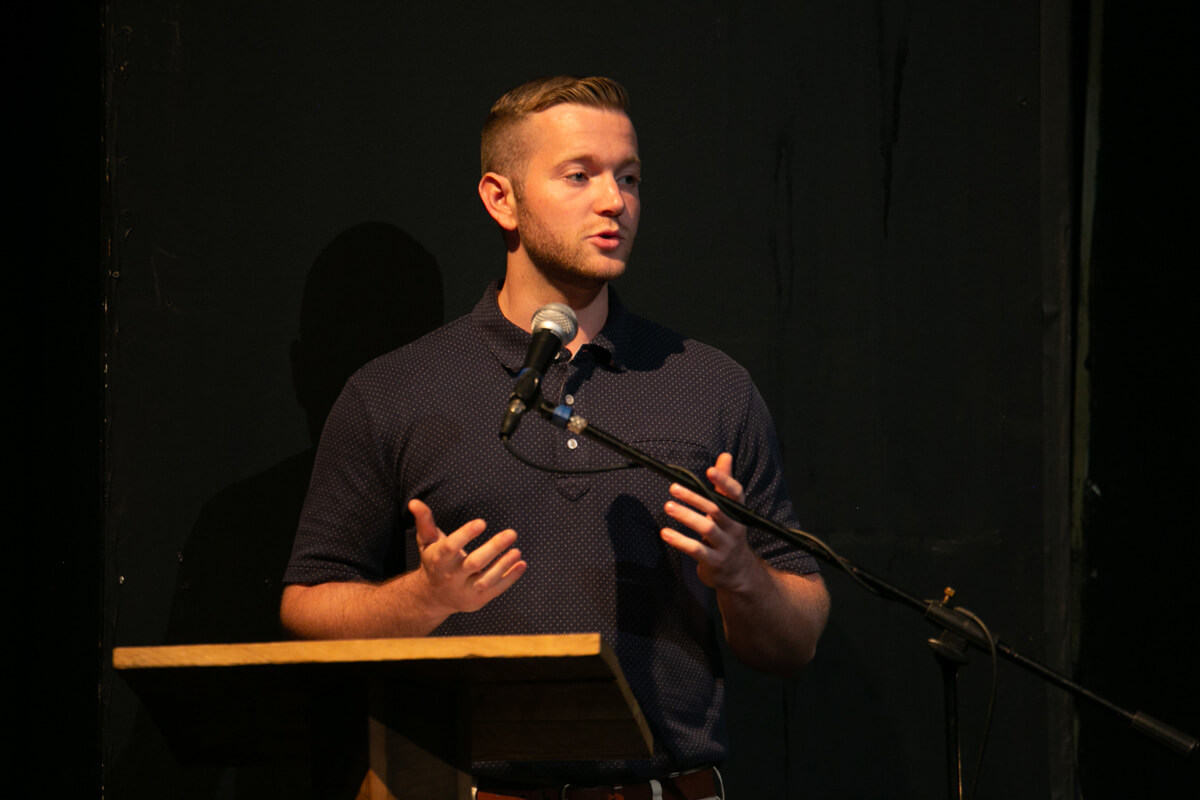 At the Powerhouse, speaker Kyle Donnelly shared his story of recovering from heroin addiction after many stints in treatment and run-ins with the law.

“I wanted to quit so bad, but it was like catching smoke,” he said.  “I had tried 12-step programs. I held your hands, I said your prayers, I read your books. I smoked and drank coffee after the meetings — and then I’d still stick a needle in my arm.”

Five years now into recovery, Donnelly is now a treatment consultant for American Addiction Centers in Richmond, Va. What ultimately made the difference for him was taking the direction of his treatment team for where he should go after treatment. They recommended a stay at a sober living facility rather than going out again on his own.
Today, he said, he often speaks to encourage others in recovery.

“What used to be a liability for me is now an asset. Through my experience, I can be of help to someone else.”