Motivational Interviewing is a form of counseling that attempts to change negative behavioral patterns by encouraging clients to explore and resolve their own ambivalence. Comparatively, it is more client-centered and directive than other forms of therapy because of its focused, goal-oriented approach.

According to the Substance Abuse and Mental Health Services Administration (SAMHSA), Motivational Interviewing is based on the following four assumptions: 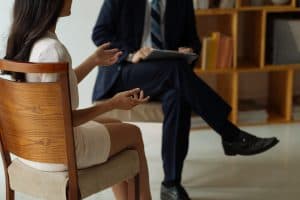 The main goal of Motivational Interviewing is combatting ambivalence, which is a characteristic of addiction. Individuals who abuse drugs or alcohol are aware of the consequences of their actions; however, those who are addicted will continue to use regardless of whom they might hurt or of any negative side effects that may occur. Some individuals are even in denial of the extent of their addiction, which is also a kind of ambivalence. In fact, SAMHSA reports that in 2014, only 11 percent of Americans with substance use disorders received specialty treatment. Ultimately, ambivalence is a lack of motivation to make any kind of meaningful change in one’s own life, and that is where Motivational Interviewing comes in.

According to the American Congress of Obstetricians and Gynecologists, Motivational Interviewing techniques can be adapted to elicit all kinds of behavioral changes, and clinicians have successfully used its tactics to promote weight loss, diet modification, and smoking cessation in their patients. More commonly though, Motivational Interviewing is used to treat clients in recovery for addiction, and researchers have actually been able to quantify its efficacy in that regard.

In a study originally published in the Archives of Pediatrics & Adolescent Medicine, scientists found that motivational interventions, which consisted of a brief motivational interview followed by a family checkup, reduced how frequently and how much adolescents drank following an emergency room visit related to alcohol. In addition, a Cochrane review of 59 studies found that people who received Motivational Interviewing reduced their substance use to a greater degree than those who did not receive any treatment.

Who Can Benefit from Motivational Interviewing?

Motivational Interviewing is often used to treat clients who are struggling with addiction, but it can help anyone who partakes in risky behavior. It is best suited for individuals who are at least open to the idea of changing, even if they have not been able to facilitate those changes on their own. People who are especially defensive about their drug habits may not benefit from Motivational Interviewing initially as much as those who are less defensive; however, in the right environment, they may eventually be able to combat their ambivalence and promote positive behavioral changes.

For those who are ready to confront their addiction, there are several benefits to Motivational Interviewing. For one, it is designed in such a way that it can produce results quickly. For many clients, it only takes 2-4 sessions for them to see results. Some treatment programs take months or even years, but Motivational Interviewing ends for many clients in a matter of weeks.

The greatest benefit of Motivational Interviewing, of course, is that it actually does provoke positive change in many individuals. According to SAMHSA, a recent review determined that of 11 studies examined, nine had found Motivational Interviewing more effective than standard care or even extended treatment. Essentially, it increases a person’s likelihood of remaining in addiction treatment long enough to enter recovery.

How Successful Is Motivational Interviewing?

Individuals can attend Motivational Interviewing on their own outside of a recovery program, or they can enroll in treatment and take part in the various kinds of therapy offered within the program. No single treatment approach works for everyone, but there are benefits to entering a treatment program that offers Motivational Interviewing. According to the National Institute on Drug Abuse, combining behavioral therapy with treatment medication is the best way to ensure a successful recovery for many people. A review originally published in the Journal of Clinical Psychology found that Motivational Interviewing is 10-20 percent more effective at reducing risky behavior like substance abuse than no treatment.

There is a range of mental health professionals who can administer Motivational Interviewing. Psychologists, who have typically trained at the doctoral level, are more likely to work with individuals who have serious mental illnesses, whereas counselors, who usually have a master’s degree, often help individuals struggling with substance abuse. Individuals with co-occurring disorders may feel more comfortable seeing a psychologist, but at the end of the day, how the client responds to the therapist is more important than the therapist’s level of education. There are many disorders that commonly occur alongside addiction, and in most cases, Motivational Interviewing can address those co-occurring disorders as well.

Because clients usually only need to attend a few sessions of Motivational Interviewing in order to experience results, it is one of the most cost-effective forms of therapy available. Some insurance plans cover it, and many drug addiction treatment programs offer it, so for many people, it is fairly accessible.

Its short duration also makes it an appealing approach to treatment in general; clients do not want to invest a significant amount of time in a program that does not work, but they will know if Motivational Interviewing is producing results for them in a matter of days. In addition, its goal-oriented approach breaks down recovery, which is overwhelming for many, into small, manageable steps that people can focus on one at a time. Instead of worrying about maintaining a lifetime of sobriety, clients just have to focus on attending 2-4 sessions of therapy, which makes entering recovery far more manageable.

treatment
Help is a Phone Call Away
Please don't suffer with substance abuse thinking no one cares. We care and want to help you get back to the life you deserve.
Are you covered for addiction treatment? Find your insurance.
and many more...
✕
Instantly Check Your Insurance Coverage
Your information is safe & secure
At Oxford, we accept most types of private (non-government) insurance and offer a variety of payment options.
You can quickly and privately check your insurance benefits to see if you're covered for addiction treatment services. We’ll be able to tell you if your provider is in network with Oxford Treatment Center and all American Addiction Centers locations.
This means your treatment may be FREE1 depending on your policy, copay, and deductible.
Get the Info & Help You NeedWe're open across the US. Learn about your options.