It is not possible to talk about Rational Emotive Behavior Therapy (REBT) without referring to its founder, Albert Ellis, PhD. Ellis is also one of the founders of Cognitive Behavioral Therapy (CBT). A native of New York City, Ellis was undoubtedly very precocious, especially in that from a young age he was interested in human behavior and thinking. His father was a businessman who often worked away from home, and his mother lived with bipolar disorder. Ellis played a key role in raising his siblings, which would have disposed him to be serious-minded and mature.

But Ellis went a step beyond being a responsible young person. He had insights about how to have a healthy mind at a young age. As one story goes, when Ellis was 19 years old, he went to the Bronx Botanical Gardens over the course of one month, and talked to 100 young women to try and get a date. Ellis somehow understood, at that young age, that he could desensitize his mind to rejection and that would help him live a more fulfilling life.

Later, as a psychologist (active from the 1950s through his death in 2007), Ellis often used his personal experiences in sessions with clients to help instruct them. Ellis’s work, as well as his teaching seminars, recorded client sessions, and interviews reveal that he was a remarkably discerning and compassionate individual. It can be said that there is one major insight that lies at the base of both of his major theories (REBT and CBT): People tend to experiences emotional disturbances because of thoughts they have and not because of the event they experienced, and these thoughts are often irrational. In this way, REBT (and CBT) can be seen, broadly speaking, as a way for a person to identify their irrational thoughts, challenge them, and develop new and healthy thoughts.

About REBT for Addiction Treatment 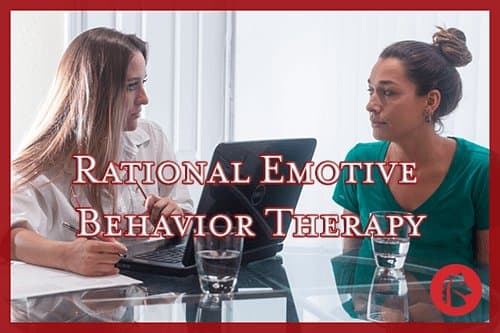 As Ellis explains in an REBT training manual, a therapist trained in REBT will see addiction as stemming from the interaction of a person’s thoughts, behaviors, and visualizations. A person who is addicted demonstrates irrational thoughts, acts in a self-defeating manner, and visualizes in a dysfunctional way.

In a session, a therapist will follow the REBT philosophy that can be summarized as:

The training manual provides a case example that can help anyone to better understand what happens in REBT sessions, REBT goals, and the role of the therapist as a counselor and teacher. The case example involves a man named Orville who has been experiencing alcohol abuse, other drug abuse, and has a history of overeating. When asked why, Orville offers that his father rejected him (the event) and that as a result he feels worthless (the belief that is irrational). But Orville is resistant at times to having his belief in his worthlessness challenged. Even though a belief may hurt a person, the belief may be so ingrained in the person’s psyche, the person may not (at least initially) want to challenge it.

Ellis, in a very clever and helpful maneuver, talks to Orville about Orville’s father’s irrational beliefs and consequently, his neglectful behavior as a parent. In this way, Ellis is showing Orville the REBT model at work, but in a way that is psychologically easier for Orville to process, because he is not at the center of the discussion (his father is). Ellis makes a decision that REBT allows for; he accelerates sessions by telling Orville his theory about Orville’s addiction. Ellis thinks Orville likes being high because it alleviates his depression. Ellis then points out to Orville how doing drugs and overeating keeps him in a cycle of depression, relief (because of the drugs and food), and depression again. This is not Orville’s last session, so there is no conclusion per se, but one key point to note is the Ellis always keeps to a main REBT technique: to continually challenge a client’s irrational belief because doing so can help a person to develop and install new, positive ideas that are conducive to healthy living, including being drug-free.

A person who is interested in REBT for addiction will have to inquire with a rehab program of interest to learn if this therapy is offered. Being in therapy with an REBT therapist is usually a transparent process. The therapist will work with the client to root out the irrational beliefs underlying the addiction, but at the same time, the therapist is teaching the client a method to examine thoughts that can be used for a lifetime. This is particularly helpful because of the relapse rate among those who experience drug abuse.

According to the National Institute on Drug Abuse, approximately 40-60 percent of individuals who achieve abstinence will relapse (but of course, they may recover again). Having a method, such as REBT, to intervene on irrational thoughts can be instrumental to maintaining abstinence. For instance, a romantic breakup could be a trigger to resume drug use because the breakup can awaken feelings of unworthiness.

Don’t let the devastating side effects of addiction go on for another day. If you or someone you love is struggling with addiction and are ready to start the treatment process, call us today at . Oxford Treatment Center, American Addiction Centers’ rehab center in Mississippi, is ready to help you get the treatment you need today.

therapy
Prefer getting help via text?
We're available 24/7 via text message. Signup below for access to our team when its convenient for you!
and many more...
✕
Instantly Check Your Insurance Coverage
Your information is safe & secure
At Oxford, we accept most types of private (non-government) insurance and offer a variety of payment options.
You can quickly and privately check your insurance benefits to see if you're covered for addiction treatment services. We’ll be able to tell you if your provider is in network with Oxford Treatment Center and all American Addiction Centers locations.
This means your treatment may be FREE1 depending on your policy, copay, and deductible.
Get the Info & Help You NeedWe offer a range of treatment programs. Learn about your options.