Can Modafinil Be Used to Help Treat Addiction?

Provigil (modafinil) is a central nervous system stimulant drug that is approved by the Food and Drug Administration (FDA) to treat the excessive daytime sleepiness that is associated with individuals who have:

The drug is also touted as a cognitive enhancer (see below).

Modafinil is classified as a Schedule IV controlled substance by the United States Drug Enforcement Administration (DEA). All of the drugs classified in this category are considered to have moderate potential for the development of abuse and physical dependence in individuals who use or abuse them.

Some of these uses include:

The mechanism of action of modafinil is believed to involve a number of different neurotransmitters that include dopamine, norepinephrine, glutamate, serotonin, and GABA. Provigil is available in pill form, and the dose can be adjusted to fit the needs of the specific case.

The Utility of Modafinil in Addiction Recovery

Research indicates that modafinil may have utility in individuals who are recovering from:

Because modafinil is a stimulant medication that is considered to be at a relatively low risk for the development of abuse, it has been used as an adjunctive treatment for individuals in recovery. Its use has primarily been focused on the treatment of sleepiness and lethargy in individuals recovering from stimulant use disorders, as these individuals often experience lethargy, daytime sleepiness, and problems with concentration once they discontinue their drug of choice.

In addition to being useful in treating lethargy and sleepiness associated with the withdrawal process from stimulant drugs, there is some research that suggests that modafinil may have some utility as a withdrawal management medication for individuals with stimulant use disorders in the same way that Suboxone has utility as an opioid replacement medication. The research results appear mixed, but there is some evidence that using Provigil as a replacement medication for cocaine and methamphetamine may have promise to assist these individuals in negotiating the early stages of recovery. In this capacity, modafinil would be used in the initial stages of recovery for individuals with stimulant use disorders and would be administered as a replacement medication to assist in the control of any withdrawal symptoms and to reduce cravings during the withdrawal period. Physicians would then slowly taper the dose of the modafinil at specified intervals to allow individuals to wean themselves off the drug.

The goal of the withdrawal management program is to assist the individual in decreasing or eliminating any withdrawal symptoms, avoiding relapse, and eventually being able to address their issues without the use of stimulant medications. The research is tentative and promising at best, and there is no formal protocol described by the American Society of Addiction Medicine for this procedure at this time. Moreover, the drug is not formally approved for this purpose. More research needs to be performed in order to elucidate its usefulness in this capacity. Although the use of modafinil is not heavily researched for treating sleepiness associated with recovery from other substances, it obviously has potential uses in this capacity.

Modafinil as a Cognitive Enhancer 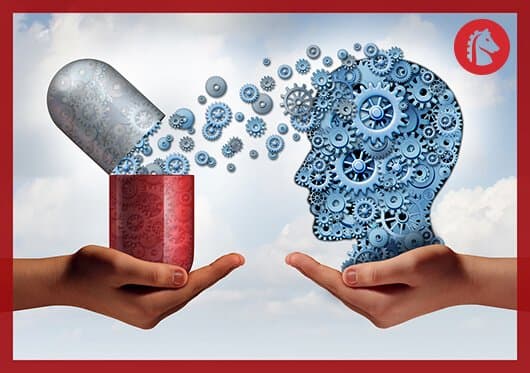 It is important to understand that the designation of a substance as a cognitive enhancer or “smart drug” is somewhat of a misnomer. Stimulant medications improve an individual’s ability to focus and pay attention; however, they do not directly increase an individual’s capacity to learn or solve problems. Often, people are under the impression that simply taking the drug makes them smarter. This is not true. Their designation as “cognitive enhancers” is simply based on their ability to help individuals to better focus and pay attention, which enables them to be able to more efficiently encode information during the learning process. In order to actually get smarter, one actually has to read, learn, and memorize things.

Other drugs that have stimulant properties have this effect, and modafinil is not unique in this capacity. For example, caffeine has been long recognized as a cognitive-enhancing substance. There is no magical process associated with the ability of stimulants like modafinil to assist in learning. In addition, stimulant medications typically have this effect when they are used at low to very moderate doses. Using a stimulant medication at high doses actually results in the opposite effect; individuals become distracted, hyperactive, and unable to focus.

Other research suggests that modafinil may have utility as a cognitive enhancer in individuals recovering from methamphetamine abuse and cocaine abuse. Potentially, it may have utility in addressing some of the cognitive issues that occur in individuals who have chronic issues with benzodiazepine abuse. Individuals who have cognitive problems that are associated with the development of a stroke or other neurological issues as a result of any form of substance abuse may be able to benefit from using low doses of modafinil.

However, modafinil is only one of many drugs that may have this capacity. It may not represent the best choice due its potential for abuse and the development of physical dependence.

Modafinil may be a useful adjunctive medication for treating lethargy and sleepiness that occurs in recovery from certain types of substance use disorders (most often, stimulant use disorders). Modafinil may also have potential utility as a stimulant replacement medication used in withdrawal management treatment for individuals who suffer from serious stimulant use disorders to cocaine, methamphetamine, and other amphetamines. Due to its stimulant properties, the drug may also have utility as a cognitive enhancer for individuals who suffer from issues with attention associated with prior substance use disorders.

If you or someone you love is struggling with the devastating side effects of addiction and are unsure of where to turn, call us today at . Oxford Treatment Center, American Addiction Centers’ Mississippi rehab, is ready to help you get the treatment you need today.